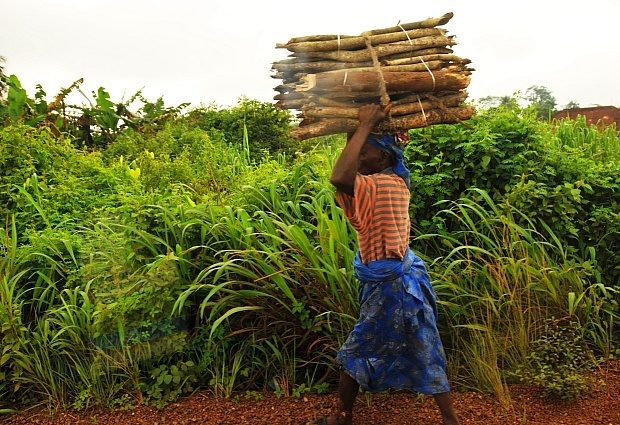 Beady eyes stared back at me from the window seat as I switched seats after takeoff en route to Amsterdam. Our flight was barely full and there was a large, sweaty man causing a scene, yelling at the flight attendant for not letting him take the seat he wanted.

I watched my petite seatmate fumble for the remote control and I reached across her stack of books in the middle seat to help her. Her long sleeved sweater revealed narrow, fragile hands.

“Oh, don’t worry, my dear,” she interjected. “I plan on sleeping all night. I’m just looking at it”.  I smiled back. A few seconds of silence.

“So where are you going?” I asked, making light conversation.

“Washington State to see my daughter,” she replied. “I still have three more flights to catch once I get to Amsterdam”.

“Don’t worry. I slept for three days in preparation so I’m ready. If my child needs me, I hop aboard a flight. No questions.” Each time, she leaves her village and makes her way down to Lagos – the bustling heartbeat of the country – to catch a flight.

We began swapping flight check in stories, commiserating about how we had to unpack and re-pack at the airport weigh-in.

“People are always asking you to buy them something. Please buy me this! Please buy me that! Like they actually gave you money to buy it,” she added. “So where are you going, my dear?”

“Ha, Sweden. Isn’t it one of those Scandinavian countries? Very cold with about 10 million people or so?”, I nodded in agreement.

“Next to Iceland, Norway, and what is that small country?? Denmark!” she added. “I used to be a school principal, you know.” She beamed. “And I love geography. Looking at maps and learning about the world.”

“Very cool. So which other countries have you visited?” I asked, digging for more stories.

Our meal was served and she immediately put away a bread roll for a snack in anticipation of a six hour layover in Amsterdam.

“Didn’t Roger Federer just beat that Swedish guy, Söderling, in tennis?” she asked between mouthfuls. She looked at the plastic silverware and transparent food boxes, and put those away too.

From my silence, she sensed my unasked questions.

“I read a lot. I read everything. After my husband died, reading became my comfort while my children are away.”

She told me about her baby in college and how the older kids are chipping in to make sure she’s cared for. They’ve had too since she hadn’t received her due pension in over 10 years.

“Can you imagine?” she turned to me, her dark eyes shining like obsidian. “I’ve been to the ministry many times about the issue and the guy there wants to discuss the issue of my pension…something that’s already mine.”

Our conversation ebbed and flowed and also dove into the country’s cancer – corruption.

She lives in the Delta region where militants fighting against the oil companies run rampant, kidnapping foreigners, and breaking oil pipelines. Opportunists have entered their fold.

“Rogues are now joining the cause,” she chimed in. “That is the tragedy. The same with policemen.”

She told me a story of a recent trip she took on a crowded bus. Barely a few kilometers into the journey, the bus was pulled over by policemen looking for money from the passengers. They spotted her large suitcases and demanded who owned them.

One of the passengers pointed to the old lady at the back.

“Old woman! Are these your bags?”

“Didn’t the other passengers already tell you?” she replied. The officer let out a dry laugh.

“You’re too wise for yourself, old woman!” She stared back at the officers, unflinching, not blinking.

Age isn’t an exempting factor. It only determines the level of aggression they use. We chatted for five of the 6 hours from Lagos to Amsterdam. So many tales and anecdotes shared that need not be retold but forever savored in our moments together.

I observed her, fascinated by this tiny woman, her experiences, her wisdom, her one-liners.

She tenderly adjusted her scarf over low-cropped white hair as I observed her in awe.

“My name is Josephine,” she finally introduced herself. “I’m 71.”