I’ve always had a crush on Edinburgh. One that turns me into a gushing teenager whenever I talk about the city to my husband. Edinburgh reminds me of a gentleman – tall, slender, down to earth, old-fashioned, unassuming, unpretentious, moody at times, with a smile that lights up the room when the sun comes out.

And the sun was out in full force when we rolled into Waverly Station from London. Faces pressed against the window of our train, my daughter in my lap, pointing out rolling greens and lapping waves of the North Sea to her, excitement bubbling to the surface – I got the feeling our four days in Edinburgh wasn’t going to be nearly enough. Having visited this Scottish port city once before, I knew my bearings and immediately started craning for those centuries old weathered Victorian walls of old town once we left the station. I couldn’t wait to show my new love my old love. This would be my husband’s first time in Scotland.

Check in and luggage drop-off at the Best Western Bruntsfield Park was a breeze. After stuffing my mouth with their home-baked shortbread cookies and grabbing a couple for the long arduous trek back to the hotel’s front door, we decided to make good use of the sunshine. Like the moody gentleman Edinburgh reminds me of, I wasn’t sure how long that smile would last.

Our first stop was the imposing Edinburgh Castle which my husband already liked from a distance. After hitting the first few cobblestones with the stroller, we transferred Baby into her carrier for the rest of the trek. Once at the top, I remembered that panoramic view in all directions; that sea that goes on forever. I spotted the traditional bagpiper. He wasn’t smiling much and I noticed the ring of tourists tiptoeing around him. Initially thinking he was part of the attraction, I found out he was waiting for a wedding party to arrive and had been posing with tourists out of courtesy all morning. A trait my husband would later point out in all the Scots we met on the trip. Willing to take time out to help even though it wasn’t convenient for them.

Amidst the bustling tourists, I could still find moments of solace to take it all in…until my daughter broke it with her shrill of hunger. So with gorgeous views of the Scottish National War Memorial in front of me, I fed her underneath her black tarp. We later moved on to Camera Obscura – a “world of illusions” also known for its giant rooftop periscope that brings moving images of the city into your hands. My first comments to my husband before we even stepped in was “I don’t want anything to make me dizzy!”

See, I don’t do dizzy. I don’t like roller-coasters for that very reason so I was initially skeptical. But those fears were unwarranted. I loved Camera Obscura. I caught myself mouthing “That’s pretty cool!” several times as we moved from floor to floor checking out mirror displays, light machines, optical illusions, and other neat effects including finding out that I will indeed look like Oprah Winfrey in about 30 years when I tried its time machine. 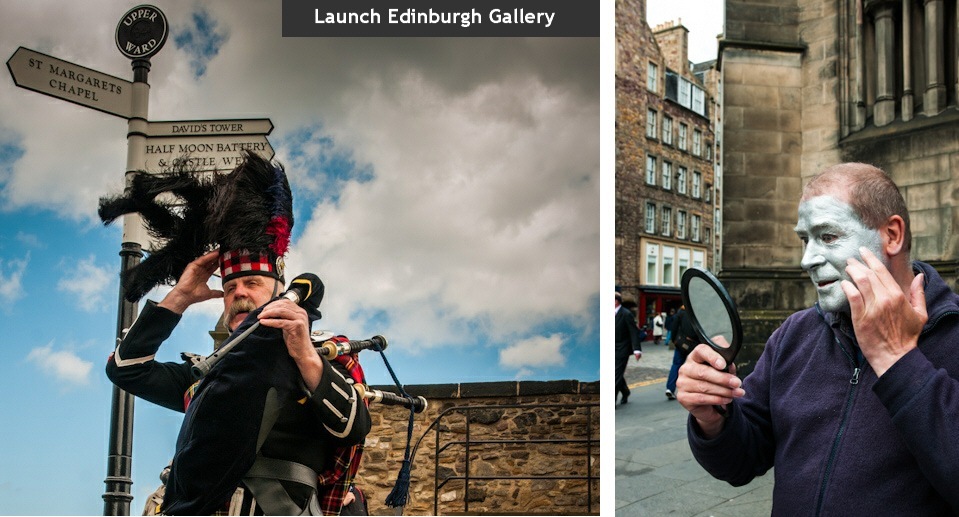 The rest of the day was spent walking the length of the historic Royal Mile twice, flitting in and out of stores looking for a wearable souvenir for photos I could snap to embarrass my daughter with once she becomes a teenager. I remembered the guards at Palace of Holyroodhouse, but this time around, its grounds stood eerily stark as rain clouds began to move in and the otherwise light breeze started to pick up.

I glanced over at Arthur’s Seat. I’d been up there once before. Not this time. I had a stroller in tow. But I vowed to return once she could scurry along on her own two feet. On our trek back along the royal mile, I ran into Dieter, a busker taking off his face paint which naturally called for a photo. Dieter would switch from his Scottish accent to his German one as we chatted a bit about his work busking in front of St. Giles Cathedral.

The next days brought torrential downpours and gusting winds that grabbed and crumpled up my umbrella like a sheet of paper. But they also brought the highlights of our trip – meeting with my friends Karen Bryan including having a superb Indian lunch with her at Mezbaan, Jools Stone who runs Trains on the Brain, and finally my childhood friend Bose from primary school back in Lagos, Nigeria.

The rain kept us mostly exploring our neighborhoods of Bruntsfield and Morningside – visiting hole-in-the-wall cafes for Scottish breakfasts, hitting local grocery stores for replenishing snacks and diapers, filling up on ethnic cuisine – traveling slowly the way we love to travel in the first place.

Special thanks to @VisitScotland for providing me with passes to explore some of the city’s attractions. While the passes were complimentary, they in no way affect my feelings towards Edinburgh. I was already in love with the city decades before I knew what a tourism board was.