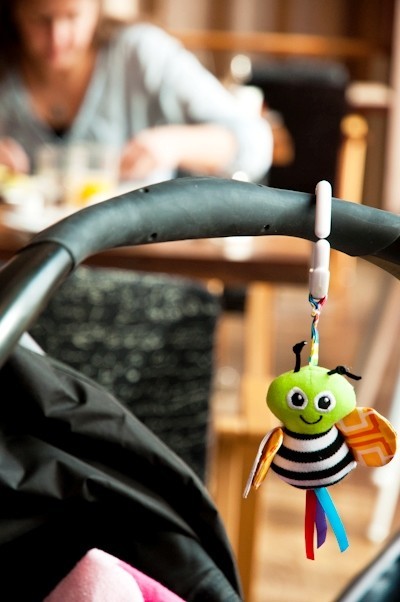 I thought I’d packed everything possible. I mean, I come from a family of condense packers. The frequency at which we shuttle between Nigeria, the US, and Europe requires skillful packing. After all, we have to fit three suitcases worth of crap into the single suitcase British Airways allows us economy travelers to carry. On the few occasions we fly business class, those three bag allowances are worth more than the fancy-sounding four-course dinners they serve in Club World.

But I digress. This time was different.

Even though my husband and I have driven this same 12-hour stretch so many times, this was our first roadtrip together with a 2-month old. Portable crib, enough clothes for a month, bottles, pump, diapers, laptop, camera, stuff, stuff, stuff.

Our 12-hour trip went on and on and we arrived at our destination two days later. Granted, we were hit by a freakish April snowstorm (it is Sweden afterall) on the second day that caught even the meteorologists by surprise so we had to stop for yet another night.

Roads were covered with snow. The wind threatened to run us off the road. My daughter had already downed all the milk I had pumped like tiny shots of alcohol and was screaming her lungs out. Stopping by the side of the road meant getting stuck in inches of snow and spinning on summer tires.

I was tired, nervous, clueless, scared… We were crawling at 30-35 miles/hour on the highway, trying to make it to the closest town Skellefteå in one piece as we passed a similar car already in a ditch, the driver making calls on his cellphone while waving us on.

I’ve always known that we ultimately have no control in life. We may choose which paths we’d like to pursue, but in the end, we can’t honestly say we fully control the outcome. We’d planned for every possible situation but hadn’t anticipated that the conditions necessary for each situation to “be” possible would be soooo unpredictable.

I was confident that I’d packed enough clothes for the month, but under the two-day drive, she’d already pooped through 1/3 of the clothes.

The main thing these last few days have taught me is that I’m technically back to square one as a traveler when it comes to traveling with a baby, an infant. All the jet-setting skills I’d been so proud of have been eroded by the fact that I now have another human tagging along that is totally dependent on my decisions.

Admitting that I have no idea how to properly travel with a breastfeeding baby isn’t the easiest thing to do. We haven’t taken her on a plane yet. I’m planning that for sometime in May. It would probably be a lot easier and smoother than packing for a month up north and a 12-hour (without kids)/2 day (with kids) roadtrip.

This means I’ll definitely be hitting up some mommy traveler blogs for awhile, and may very well start compiling my own experiences and advice based on trial and error.

Who knows. When it comes to going with the flow, I’m no longer a casual believer of that mantra. This baby is forcing me to fully and completely live it.