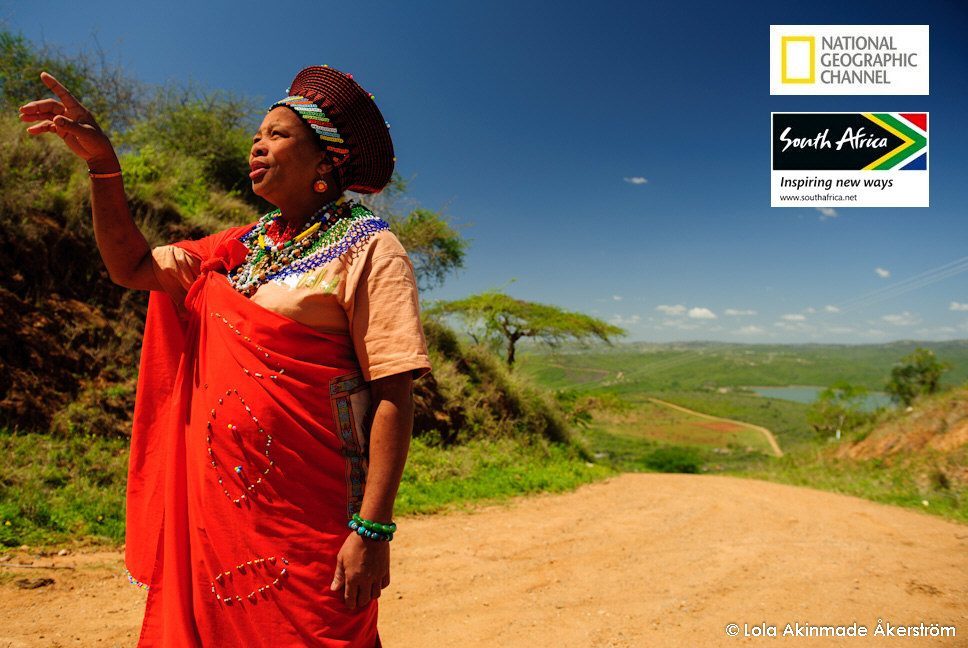 Trying to sum up my experience in South Africa with National Geographic Channel feels impossible. Plain and simple. The impressions, the experiences, the people, smells, sounds, culture – all rich, all memorable – have left so many imprints on me that I’m aching to go back to South Africa with my husband and baby in tow.

As a travel photographer, I’m drawn to people and rely on their environs to tell, or rather, show me their own sense of place. From rickshaw drivers Walter and Alphous to Dennis the Menace at his Indian spice stall to model Londy Simelane, the surfers I encountered along the pier, and our amazing crew, I met so many lovely down-to-earth people whose personal stories were intriguing.

So instead of a long winded narrative on how South Africa truly touched me, I wanted to share a few portraits and stories of the warm and generous people I met while traversing KwaZulu-Natal and soaking up Zulu culture. 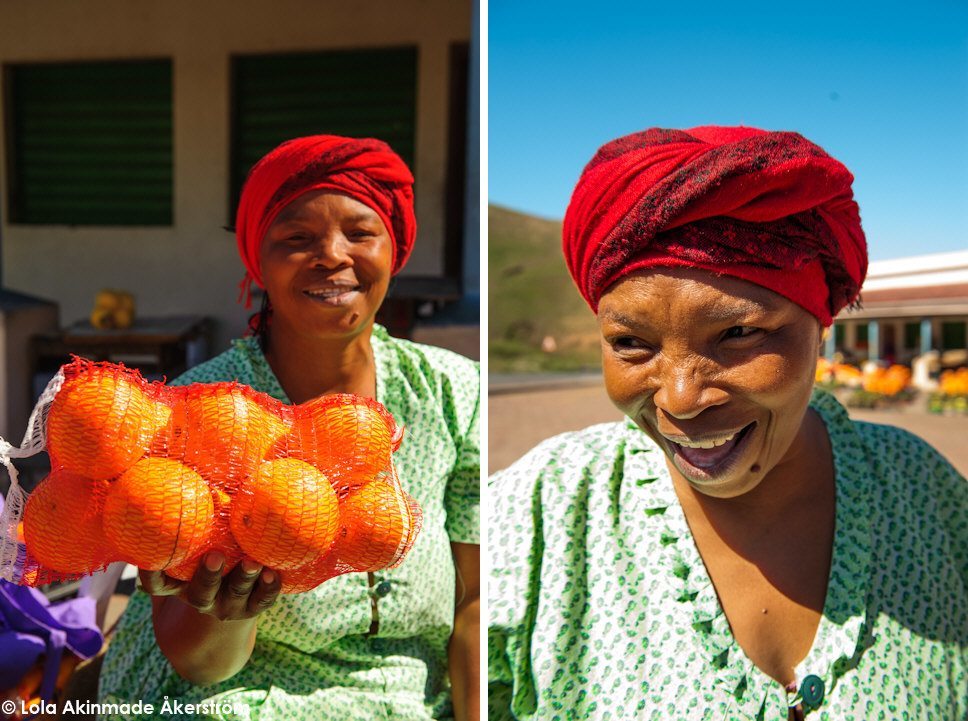 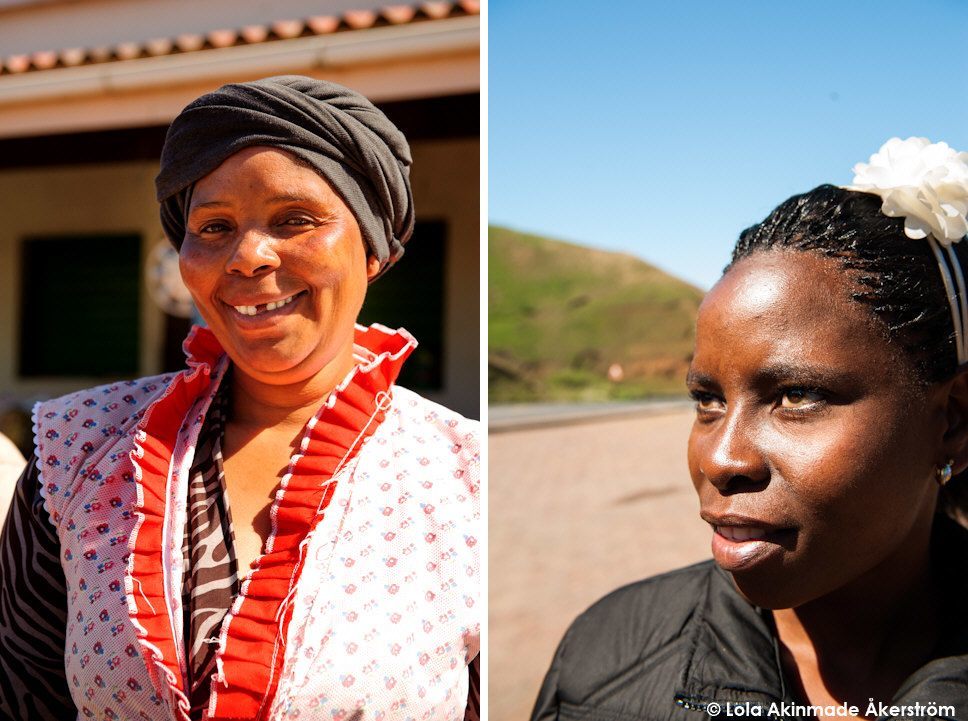 We’d initially driven past their waves of ripe oranges and green avocados, and decided to backtrack to take a few photos as well as film Eshowe’s roadside fruit vendors within their domain. I spotted the lady in black above with the white flower in her hair. She was sitting off to the side, asking me questions. Interrogating, actually. I told her she had the most beautiful eyes I’d seen that day. She didn’t believe me so I told her to step into the sun and I’ll show her. 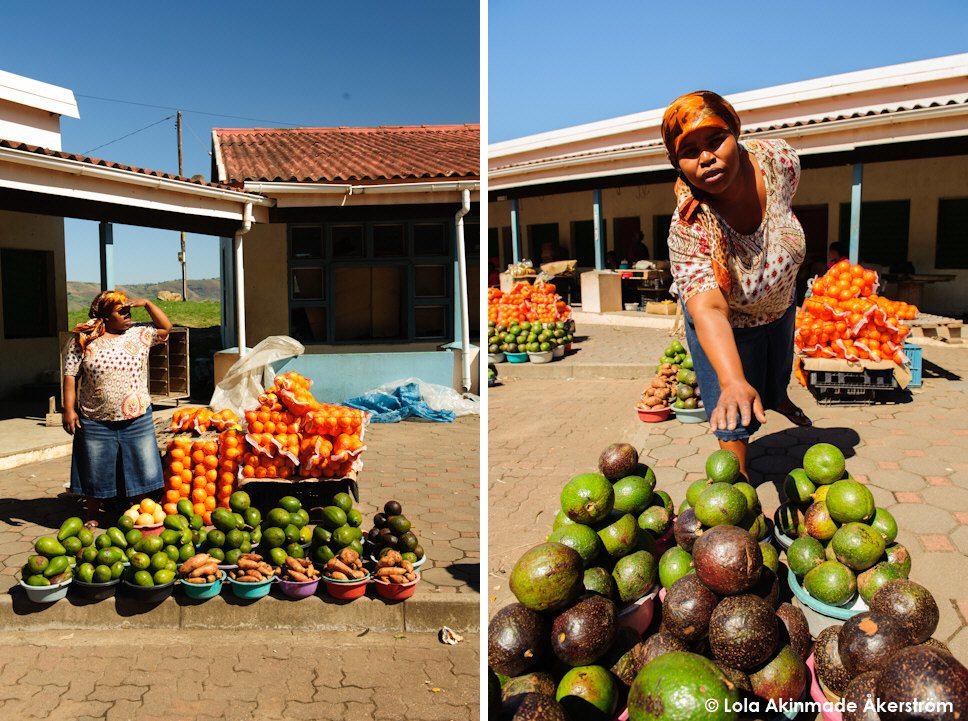 By the end of our shoot with the fruit vendors, we were eating freshly sliced avocados off crackers out the trunk of our jeep. 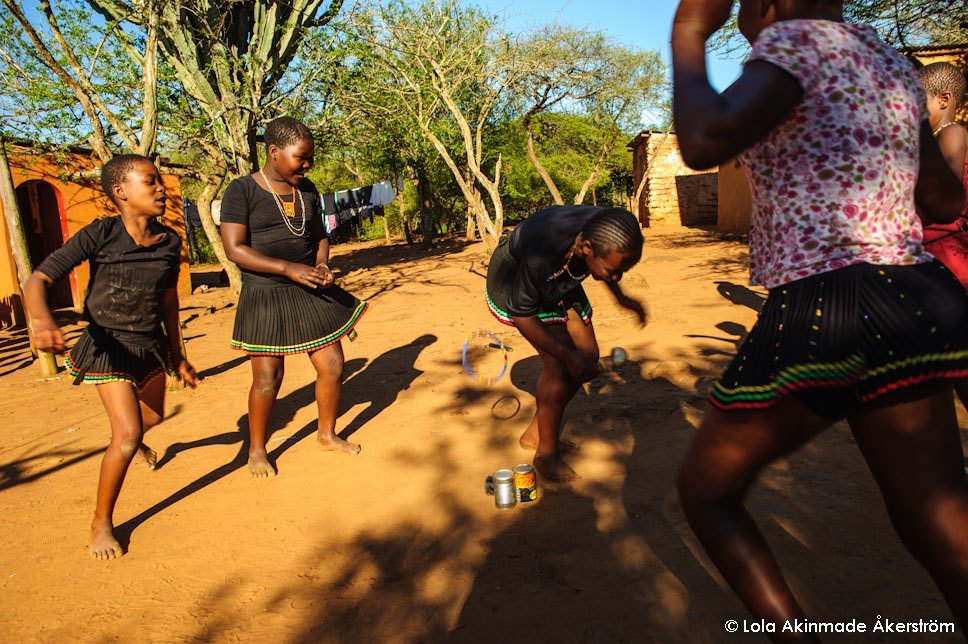 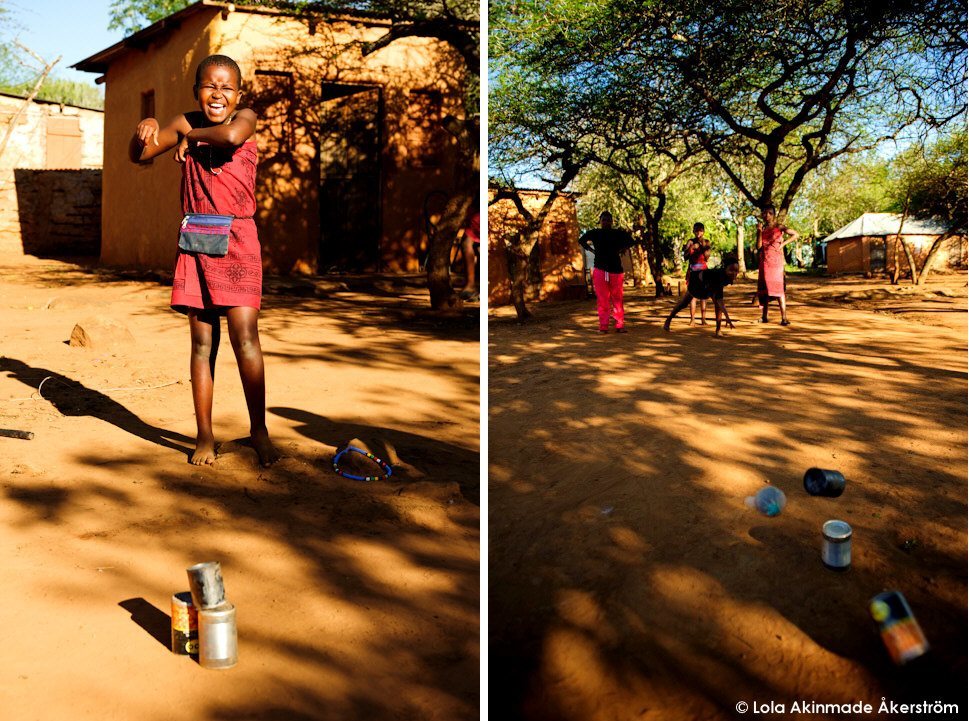 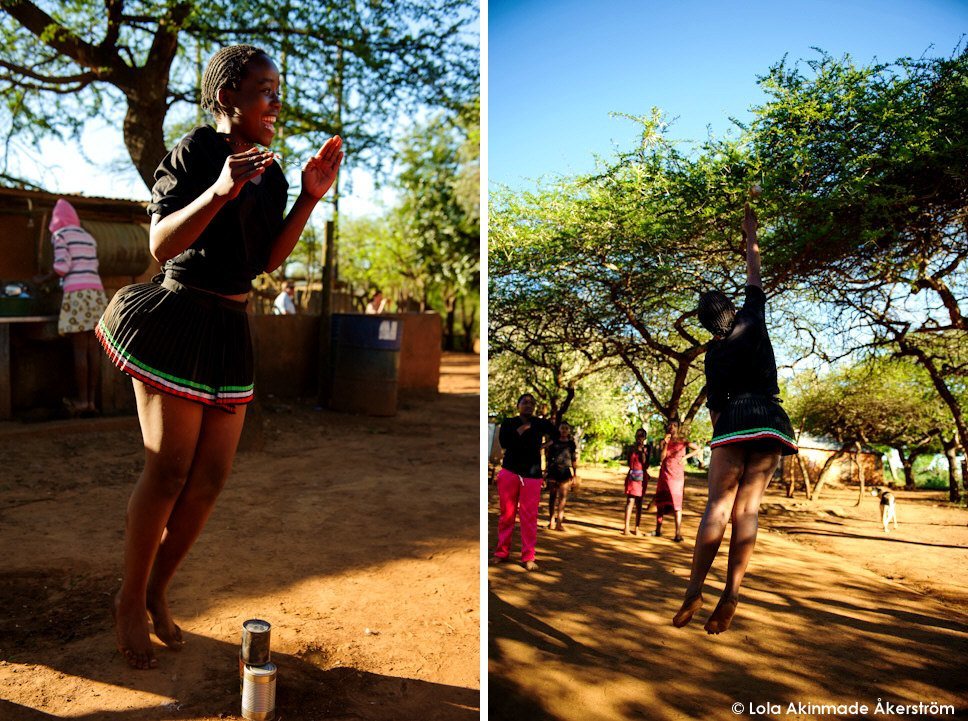 It was the sound of laughter that easily lured me behind the walls of Shakaland to find the small village there. Girls – pre-teens and teenagers – were playing a game with tin cans stacked atop each other. They’d knock the tins over with a small soft ball and then move into a “Tag! You’re it!” type of game. I watched as they ran around each other, trying to tag and knock each other out of the game. Thirty, maybe forty minutes easily passed by as I joined in on their game, playing catch as well as exploring their surroundings, my camera swinging awkwardly at my side. That moment of absolute contentment; I felt privileged to be a part of.

Self confidence in spades 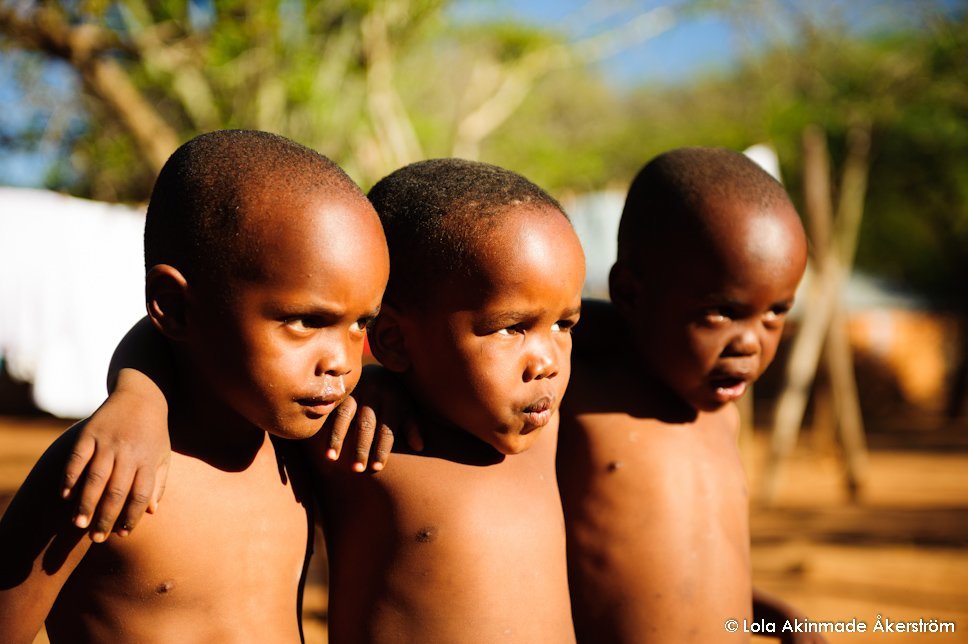 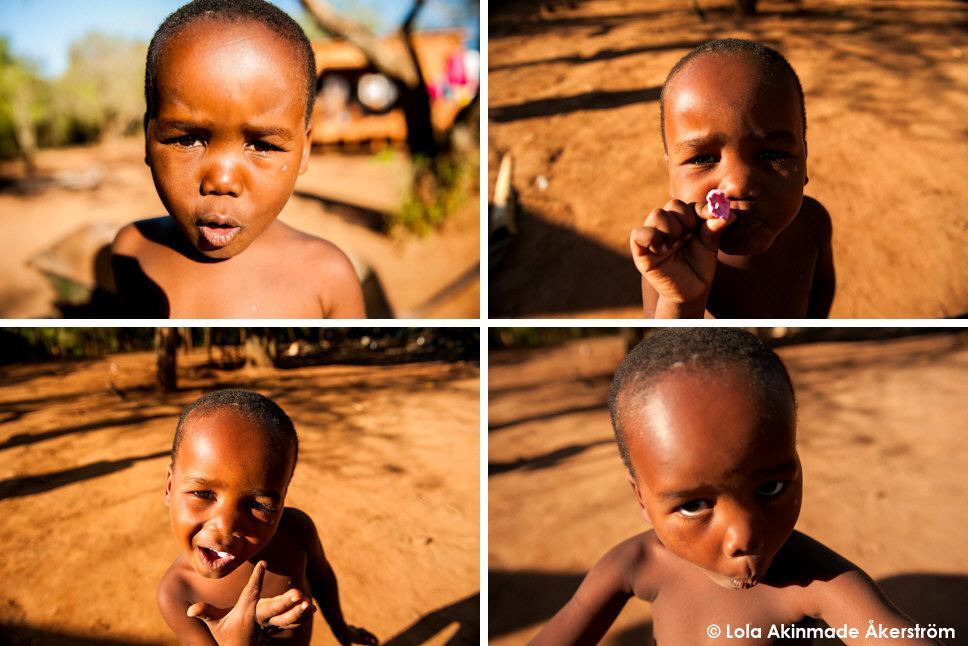 He couldn’t be more than six years old, I guessed. This little boy with more charisma in his little fingertips than many adults I know. He was pushing a wheelbarrow which he dropped promptly the minute he sighted us before rushing over. Or, maybe I was the one who rushed over to him. I can’t remember. But I do remember his little dance kicks, trying to mimic the Zulu highkicks he’d grown around. I remember the funny faces he made and how he chased me with his chewed up gum on the tip of his fingers, trying to feed it to me.

Rich, our Zulu guide, would later find me in this village and comment that people rarely came back here. To where the villagers and staff actually lived. “Really?” was my response. I was surprised. 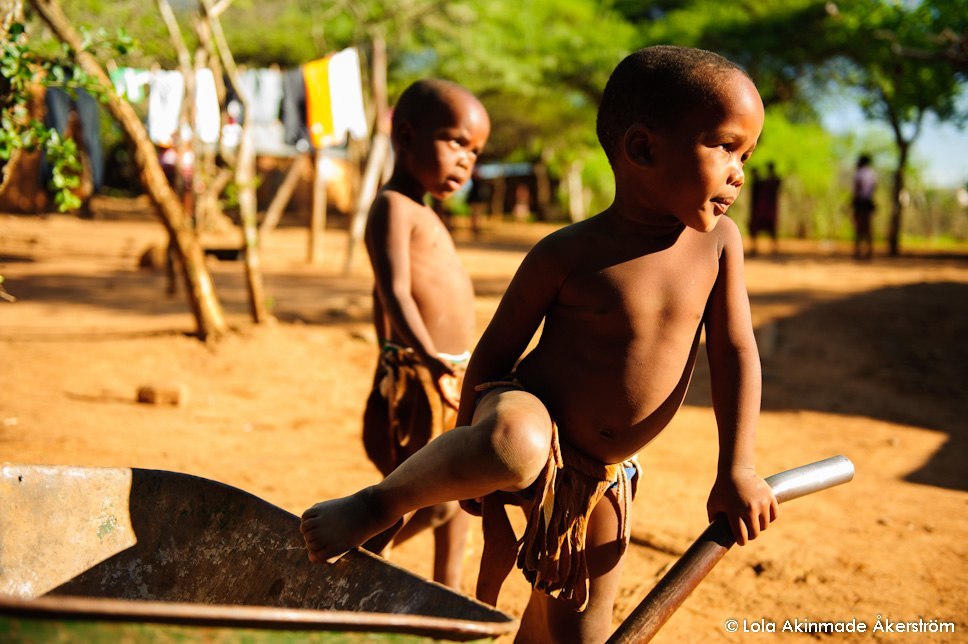 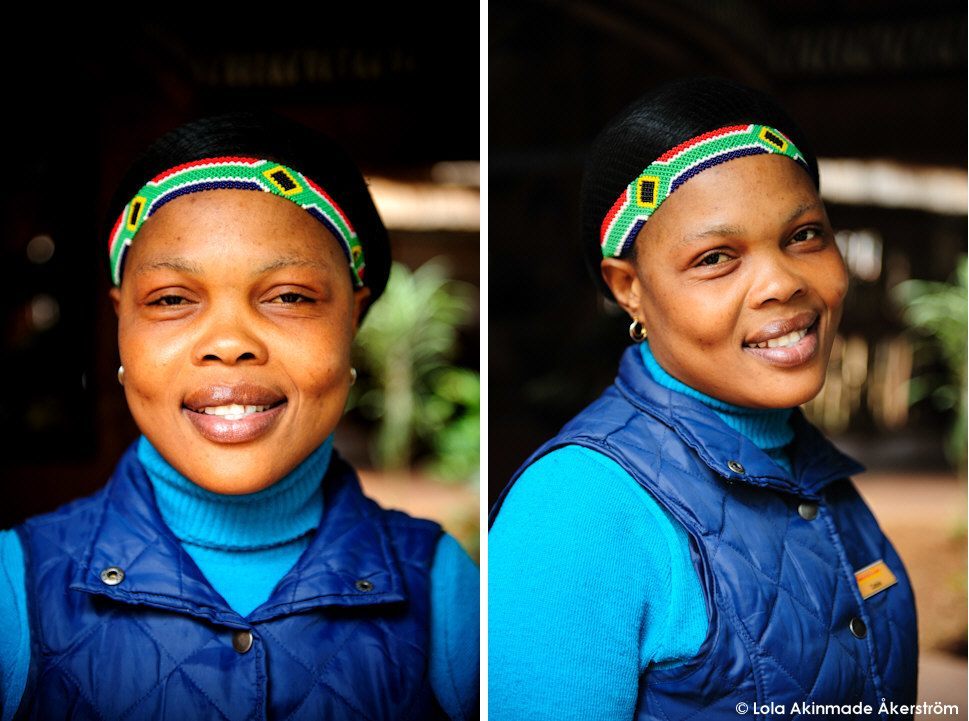 Cemie had lost her voice that day and I could tell from her eyes, she was a bit under the weather. Yet, she was at work. I’d noticed her bright smile as she slunk from table to table, clearing up plates and glasses. I don’t think she’d anticipated having to answer all my questions that day when I cornered her. Our brief but cheerful conversation ended with hot water plus honey advice.

I’d already judged Rob before talking to him. He was sitting behind the bar at Isandlwana Lodge, arms folded across his chest, soaking up conversations going on around him. Flashing a smile here and there. Chiming in once in awhile. I assumed he was the owner.

“Are you the owner?” I had to ask, and he flashed that grin once more. No, he wasn’t. He was the resident historian. He knew all about the Anglo Zulu and Anglo Boer wars like the back of his palm. He probably got more questions verifying if he was the owner of the property than about the wars.

As for the lodge, it is owned by two American women.

The hills have eyes 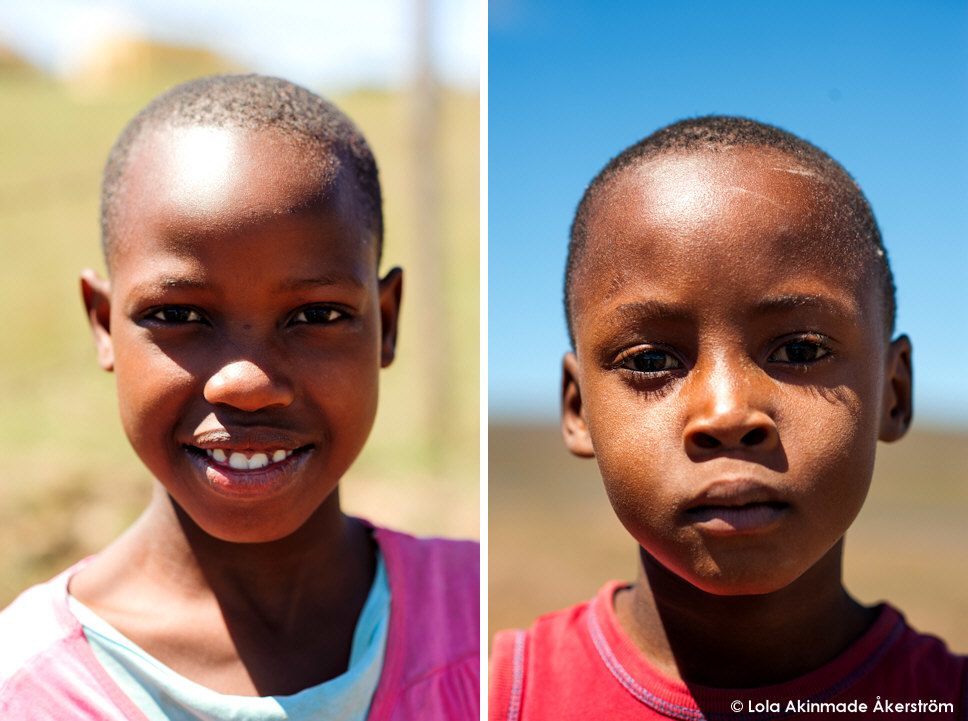 One of the things that blew me away about KwaZulu-Natal was its rolling hills. Various shades of green that roll on forever. Dotting those greens are villages like sprinkles on cakes with trees lining valleys like piped icing. As we were rolling past one such scene, we noticed a barbed wire fence and children running along it. Playing. We had to stop. To say hello.

And the eyes on those children are forever ingrained in my mind – thick lower lashes that mimic lined mascara, clear white sclera, piercing pupils and iris. Pure beauty. 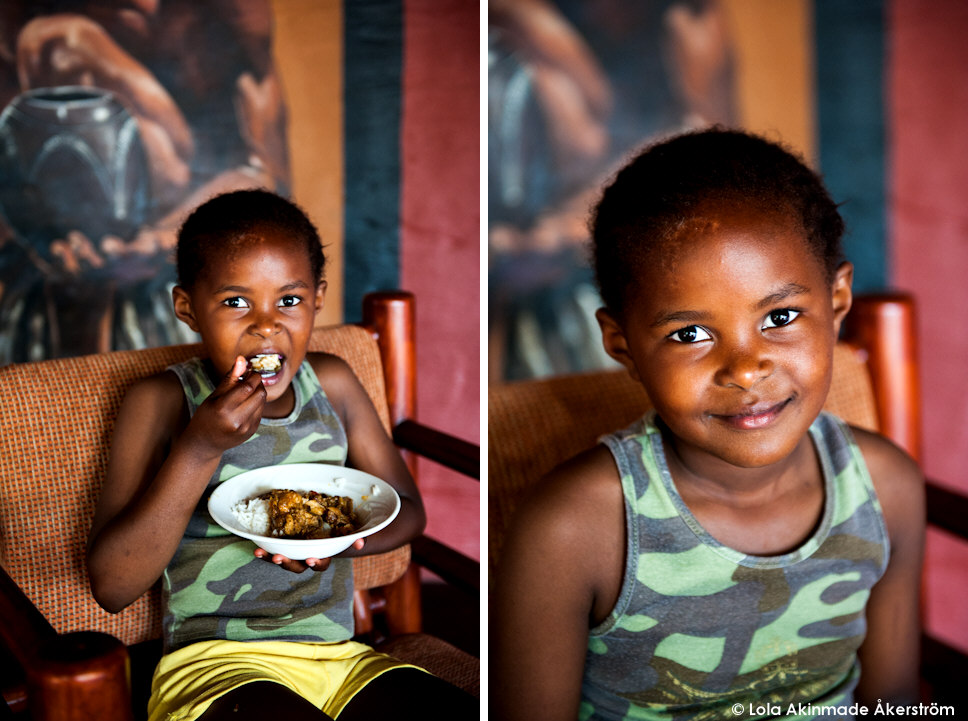 I would later find similar eyes eating a bowl of rice and spicy lamb curry. White outlined with black and piercing. 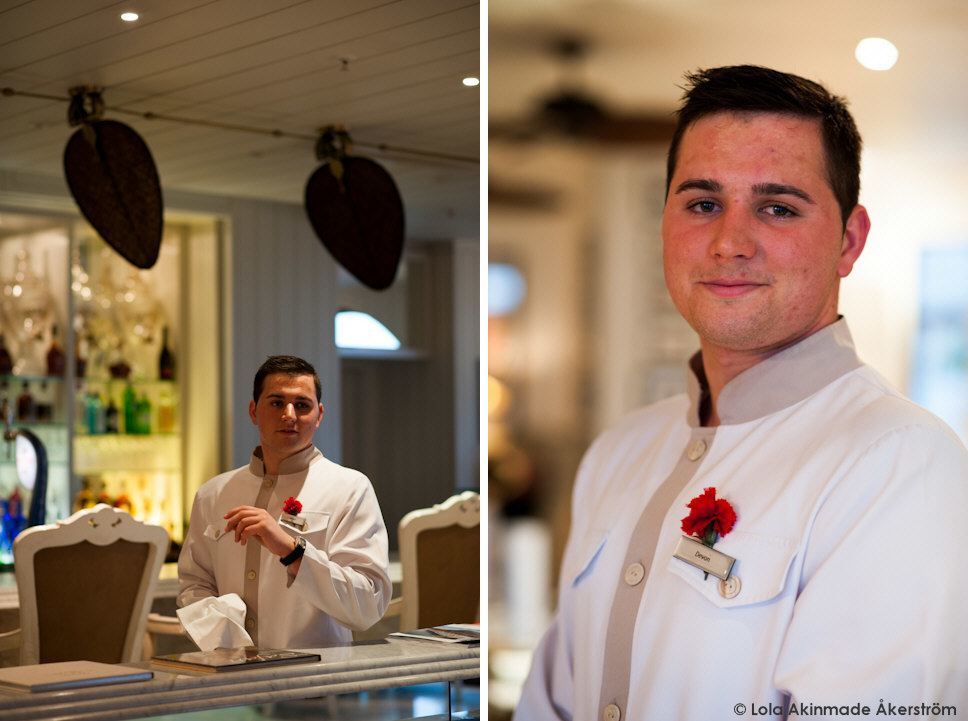 I met Devon at the uber luxurious Oyster Box hotel in Umhlanga. He’d just started working there, was in his very early twenties, and super polite. After taking a few shots, I took one of him with his mouth pursued in a “Meh!” fashion. Laughter ensued. The ice was broken, and we chatted about him, his background, his career goals. I didn’t post the “Meh!” photo, but it cracks me up every time I see it. 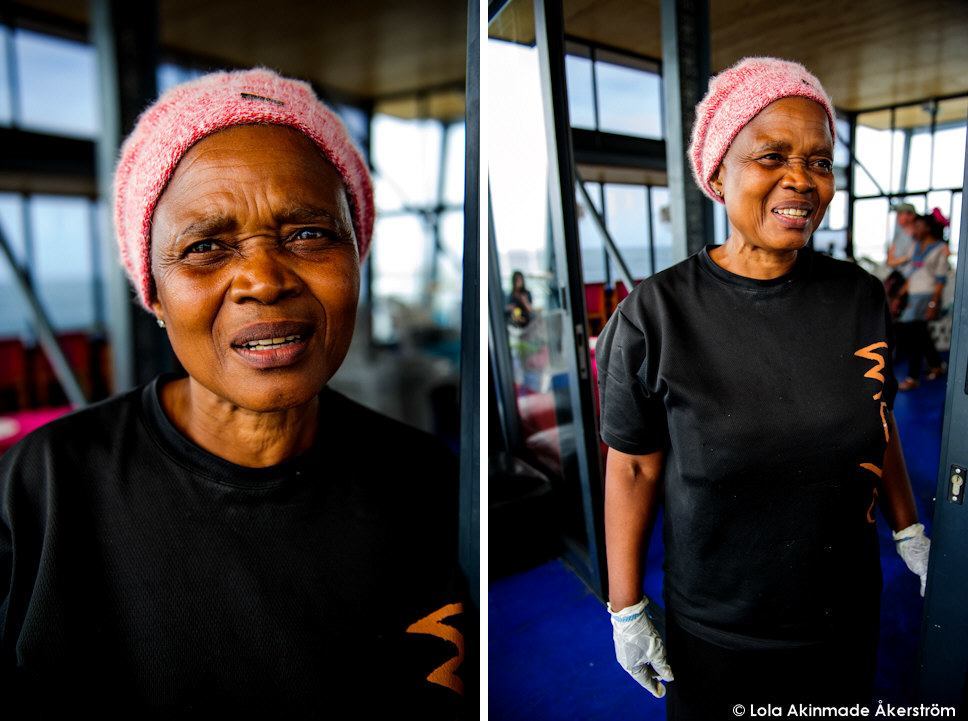 I instantly started calling her mama because that was what felt most natural at the time. She was the janitor at Durban’s iconic pier restaurant, Moyo, and she was going about her duties when I met her. It took her a second or two to realize that I wanted her photo. That I found her intriguing. She really didn’t understand why I wanted her portrait but she graciously obliged me anyways. 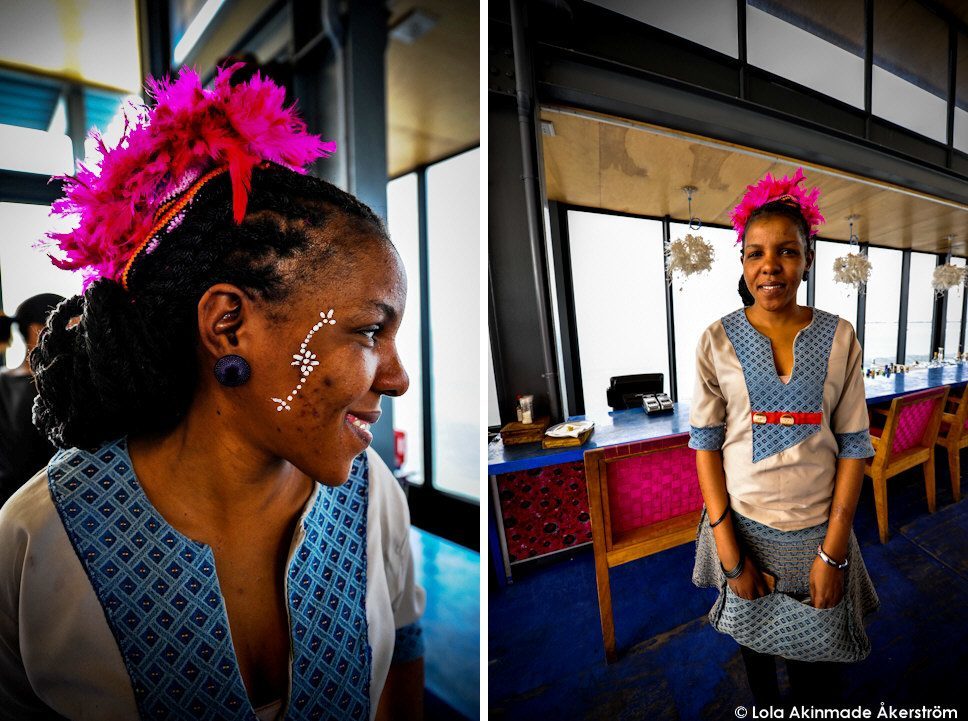 I also met Teddy at Moyo. She had face-painted symbols running down the side of her cheek and also painted similar white flowers and dots down the side of mine. As she was painting, she was talking about her day and just making light small talk as the camera crew filmed us. Her conversation got more personal, about her family, about her hopes and dreams and wishes for her family. I listened quietly and intently. Some conversations need not be shared publicly but once we were done, I looked her in the eye, said “Thank you so much!” for such a privilege, and wished for her that her personal dreams came true as well. 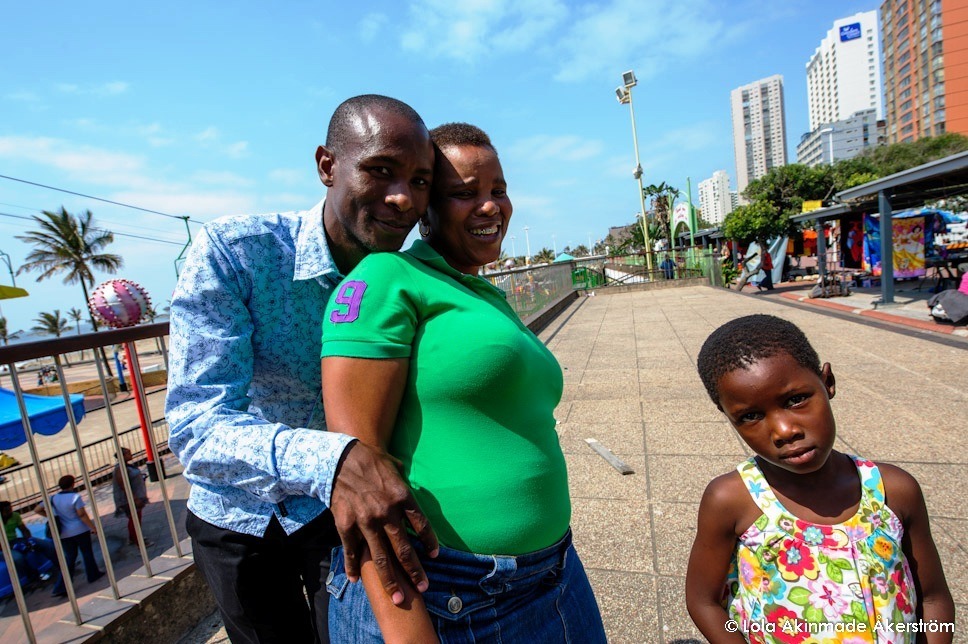 I clearly remember this family while filming along Durban’s beachfront Golden Mile. They’d seen me with my camera, but probably hadn’t noticed the crew in the background and stopped me to have their photo taken. There was no need to explain what I was doing there. I just took their photo. Multiple frames. 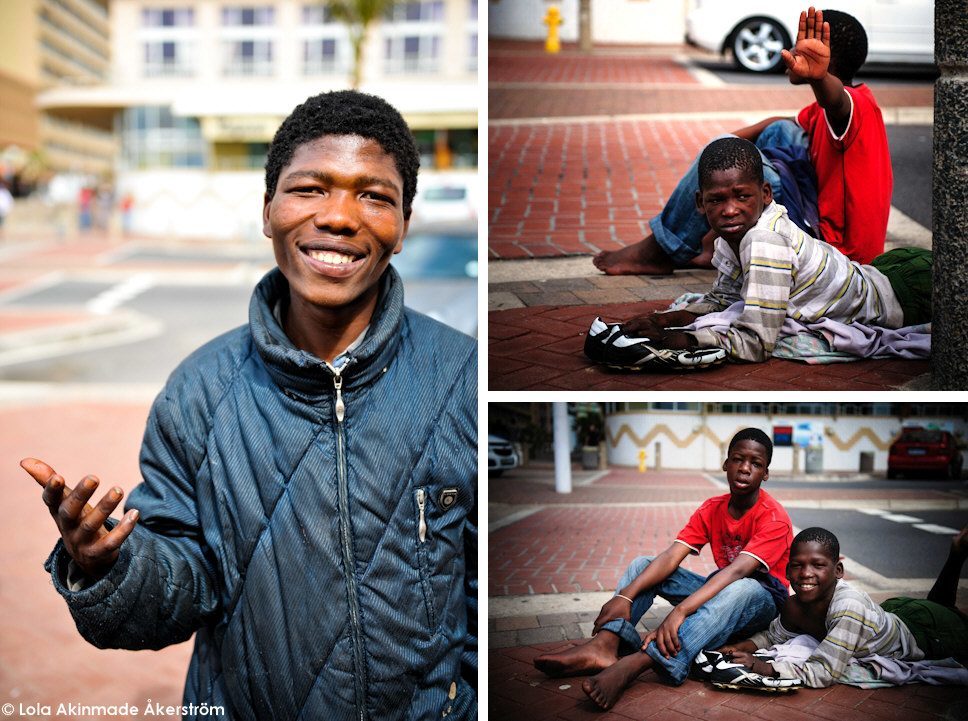 While along the Golden Mile, the boy pictured on the left above kept coming up to me, but not saying anything. I wasn’t sure what he wanted. I asked him if he wanted money, but got no response. I still wasn’t sure what he wanted or why he kept hanging around so closely until one of the souvenir vendors sitting on a mat who I’d briefly befriended earlier while she was feeding her 9-month old baby explained to me.

He wanted his photo taken. That was it. Not money or handouts.

As for the brothers pictured on the right, my initial reception was cold. I tried photographing them from a distance but they weren’t having it. At that moment, I realized I was doing what I didn’t like travel photographers doing. Objectifying people. So I walked up to the boys, got down on their level, and spent a couple minutes talking to them – asking for their names, what they did, if they were brothers, gaining their trust. Those few minutes of acknowledgement were enough to warm them up to me to get a few natural photos of them. 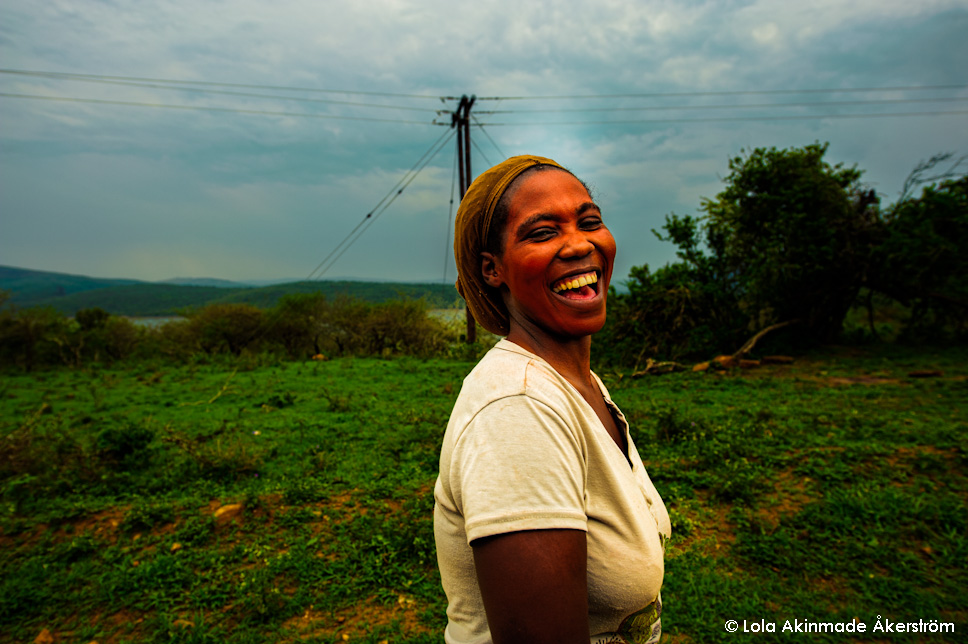 If I was going to pick just one photo that summed up South Africa for me, it would be this one. Composition wise, it’s not the strongest. I mean, there are electric wires running all over the frame. But there’s something in her largehearted laugh that said “absolute joy” to me. To me, that moment I captured meant absolute contentment. She didn’t need much to be happy, that laugh seemed to tell me.

She was a villager I met while traveling around Eshowe. We’d stopped to shoot some driving sequences along a hilly road, and I noticed her in the distance standing atop a hill with a younger man I assumed was related. I waved and they waved back. I waved again, and she came running down the hill thinking she’d been summoned. It was when she finally approached me that I noticed the red paint all over her face, and just how naturally beautiful she was. Stunningly beautiful.

When I told her this, that was what got her laughing so. 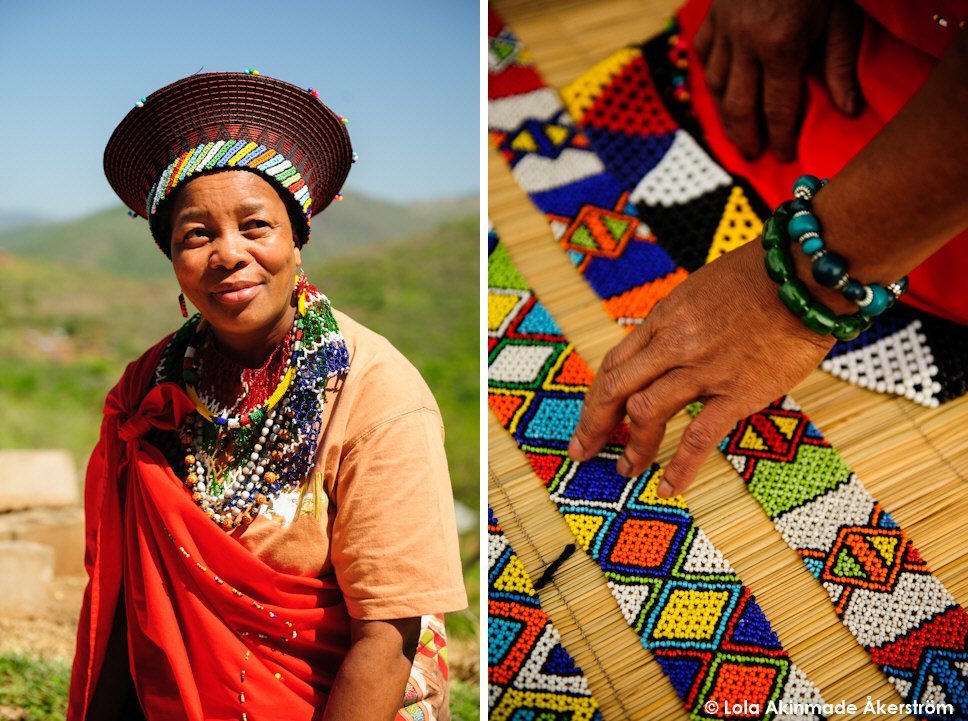 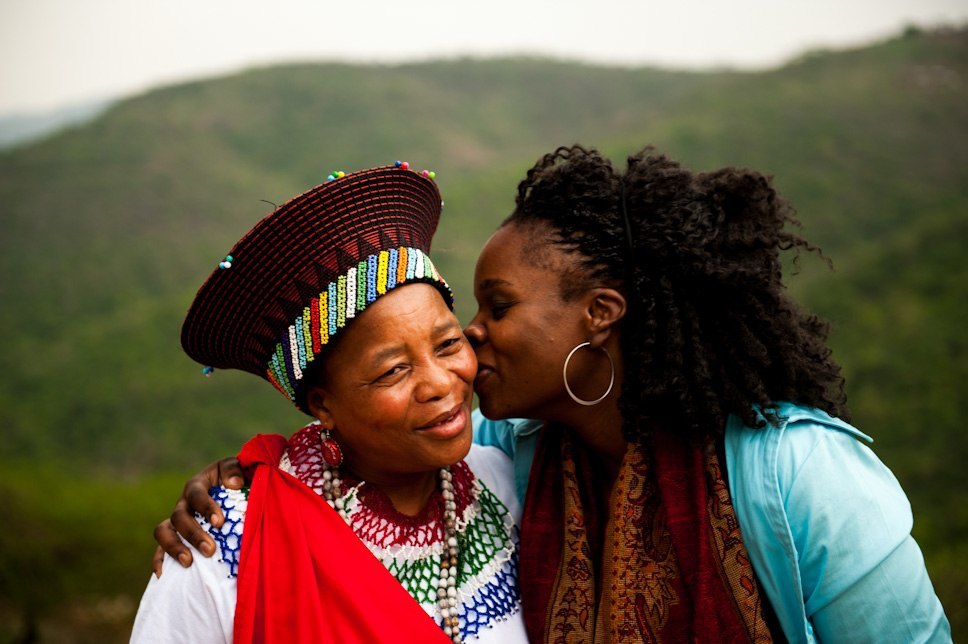 Gladys had an affinity for diet coke. At least I caught her drinking it twice during the times we met. She was 56 years and kept lamenting that fact. I often teased her, saying I never would have guessed her age. Seriously. Her skin was flawless and almost wrinkle-free. Only a few telling signs of experience. Of maturity. We chatted quite a lot. About children today. About how they’re losing respect for their elders.

I totally want to be as youthful with beautiful skin as hers when I’m 56 too.
–
These were just a few of the beautiful and warm people I met while traveling around KwaZulu-Natal – a tiny fraction of South Africa. Thanks for the wonderful memories! 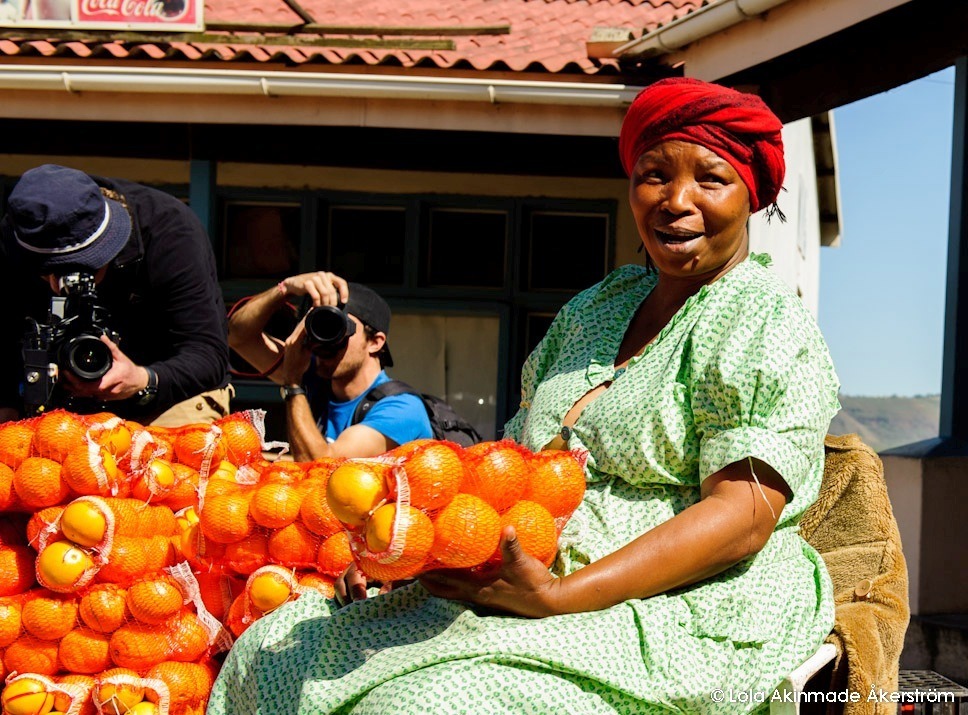 I was in South Africa filming “Through the Lens” in partnership with South African Tourism and National Geographic Channel. Read more about this exciting project.