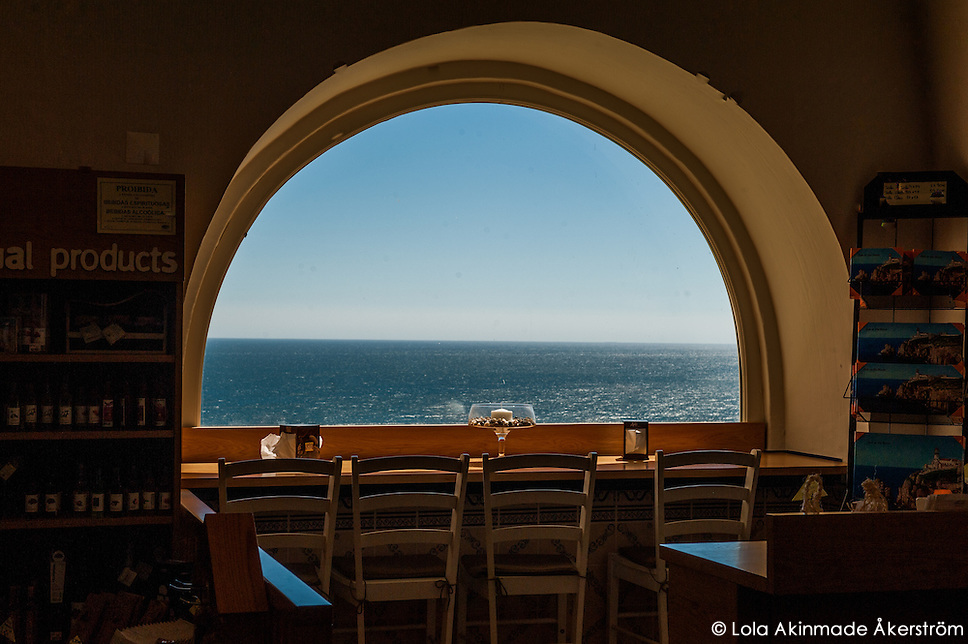 Since 2008, I’ve kept detailed notes on which publications I’ve been pitching to and their responses. This exercise has not only helped me grow as a freelancer by opening my eyes to what primarily works, but has provided a way of being transparent from my end in terms of how life truly is as a freelancer, and as a reality check for those looking to follow a similar path.

As I mentioned in a previous post, 2013 was a weird yet exciting year because I broke into new outlets but also got radio silence (borderline snobbery) from outlets I’ve written numerous times for before.

I also launched fun projects like Slow Travel Stockholm which I can’t wait to grow and expand in 2014, and I’m continually loading thousands of photos into my Image Bank and National Geographic (massive ongoing tasks)  as well as picking up a lot more local Swedish gigs such as an editorial consulting job for a large Swedish company and work with the Swedish Institute, Visit Stockholm, and Swedish Lapland.

So here’s how 2013 shook out. Each query status has been categorized using the following legend: 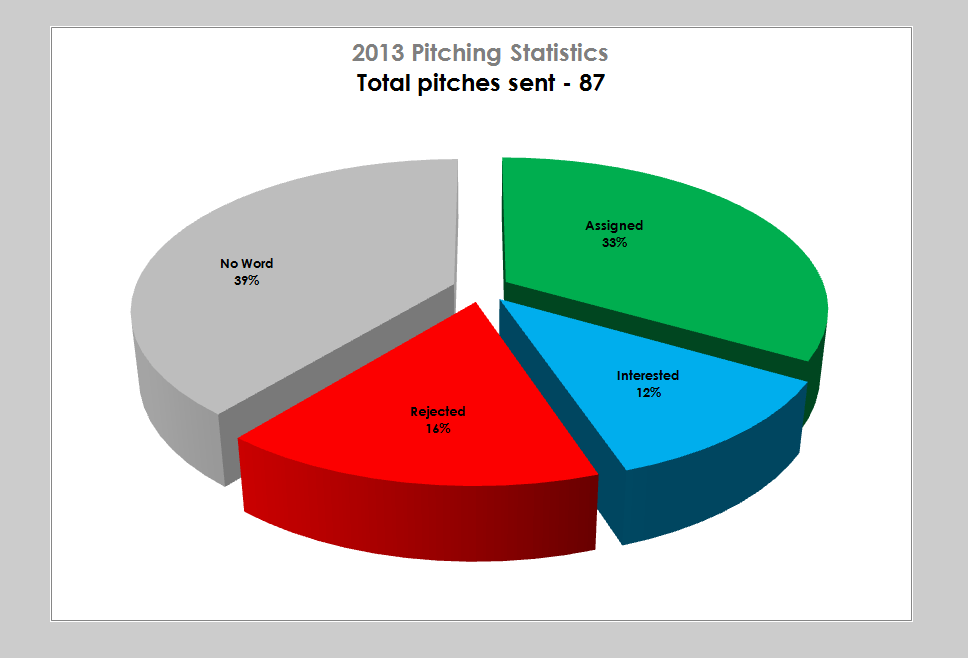 I sent out a total of 87 pitches. Of the 87 pitches sent, 29 were assigned, 10 are currently being reviewed by editors/in various stages of limbo, 14 were rejected, and 34 (yes! 34) are still floating around in the nebulous “No Word” zone which I’ve come to loathe with a passion.

Doing a side by side comparison of 2012 and 2013 isn’t really accurate because I sent 87 pitches in 2013 as opposed to only 50 in 2012 but still, I wanted to see what the relative numbers looked like next to each other. 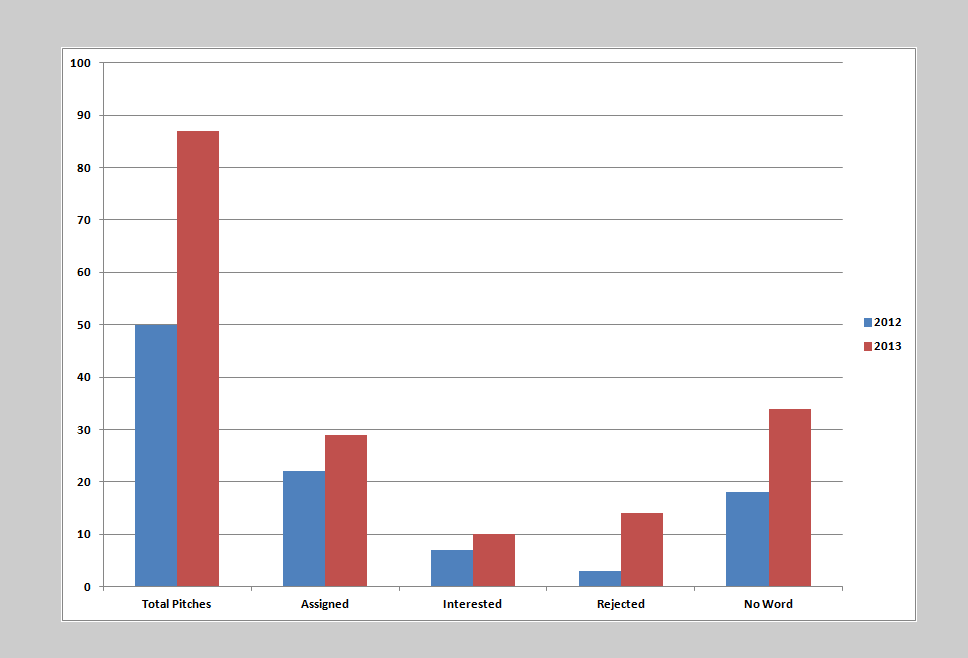 This meant I got repeat work from editors who I love working with and have developed nurturing relationships with. It also meant I focused energy on larger paying assignments as opposed to writing tons of articles for little pay. This is something I’m going to continue in 2014. That is, focusing on larger projects and assignments and continuing my mantra of working smarter, not harder.

One thing that was uplifting was that I got a ton of assignments after about the third follow up email. While sending multiple follow up emails feels like pestering, it worked for me because it showed I was interested in and invested in my story ideas and wanted to get closure on them.

So I got about 5-6 out-of-the-blue assignments this way after following up a couple times.

Rejections – Along with keeping these records, I also keep short one-liners next to each item that tells me why a piece was rejected or if an editor is interested and wants me to switch angles. So I went through to see why I had 14 rejections in 2013 and here are a few of the notes I scribbled down:

– Passed on for now

– Already ran a 48 hour piece on the city

– Ideas are too narrowly focused

– Currently not open to pitches until October

This means that I got a tad bit lazy last year in terms of properly researching existing and similar pieces before sending my pitches. This is something I’m definitely going to watch in 2014.

No Word – As a freelancer, it seems I’ll be perpetually battling those No Words for awhile but what I am actively going to do this year is instead of chasing new outlets and sending emails into oblivion, I will direct that love and energy towards clients, editors, and publications who do give me regular assignments. They above the rest deserve my time and nurturing.

So in April 2014 (this year), I was supposed to be going on an amazing expedition (a dream of mine) – following a spring reindeer migration in Lapland with an indigenous Sámi family. I was going as the photojournalist on an American expedition team along with videographers from a TV channel and an award-winning adventurer.

I brought my Sámi contacts to the table who were generous and agreed to let the team tag along. Something that they don’t agree to very lightly.

Long story short, the team coming from the US imploded dramatically which meant the expedition had to be cancelled. Both my local contact and I were left disappointed.

I do have the expedition cost breakdown and my local contact has assured me that they’re definitely open to a serious and organized team tagging along on a future migration so if you guys have any contacts or leads that might be interested as well as potential sponsors, definitely let me know and I can give you the full breakdown. 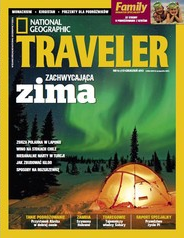 I call this the cover I didn’t get. I was extremely honored when Nat Geo Poland contacted me to let me know that they were considering one of my Northern Lights photos for their December 2013 Cover.

The final photo they went with is absolutely stunning and while I wish it had been mine instead, I’m still so excited that my photos were being considered.

Looking forward to what 2014 brings in terms of my photography.

Workwise, this had to be the most demoralizing aspect of 2013. I’ve been freelancing for some time and I fully understand the game.

Rejections never get to me because I know it was either not a good fit or the editor just wasn’t interested.

I also understand the “No Words”. Editors are extremely busy people, are under a lot of pressure, and sometimes just cannot respond to every email they get.

I get that and always give people benefit of doubt.

But what I don’t fully get are editors who I spent time with in person last year who never acknowledged the “Nice to have met you” emails I sent.

Not a pitch email. Not an email selling story ideas. But a simple email acknowledging that we met in person while other writers who were there were currently on their second and third assignments with the very same editors.

Now, one doesn’t have to form deep relationships with everyone they meet. That’s perfectly okay. But I do believe in common courtesy. Especially simply acknowledging that we met, spoke, shared meals, and even laughed together in person.

2014 is already starting off wonderfully with about five large features I’m currently working on in addition to a keynote presentation I’ll be giving in late January to 400 representatives – a cross section of  Sweden’s tourism industry- which I’m so excited about and will share more closer to the date.

I’ll be working on a lot of personal photography projects this year too. As soon as the dust settles, I’ll probably be looking to bring on two interns – one for social media and one for photography – to help offload some tasks so I can focus strategically on projects.

I’ll be actively working on Slow Travel Stockholm, bringing on new contributors, and growing it exponentially this year.

As a freelancer, I’ll continue pitching smartly, focusing on larger features and the types of narrative and investigative cultural travel writing I love doing like these pieces for Roads & Kingdoms and Women’s Adventure Magazine.

I’m also open to smart sponsorships and innovative collaborations so please ping me with your ideas.

Next up is a two-day jaunt to Washington DC for meetings at National Geographic as well as the society’s annual Photography Seminar, and then off to Helsinki for MATKA.

For fellow freelancers out there, how did 2013 go for you? Did you hit some of your personal goals?