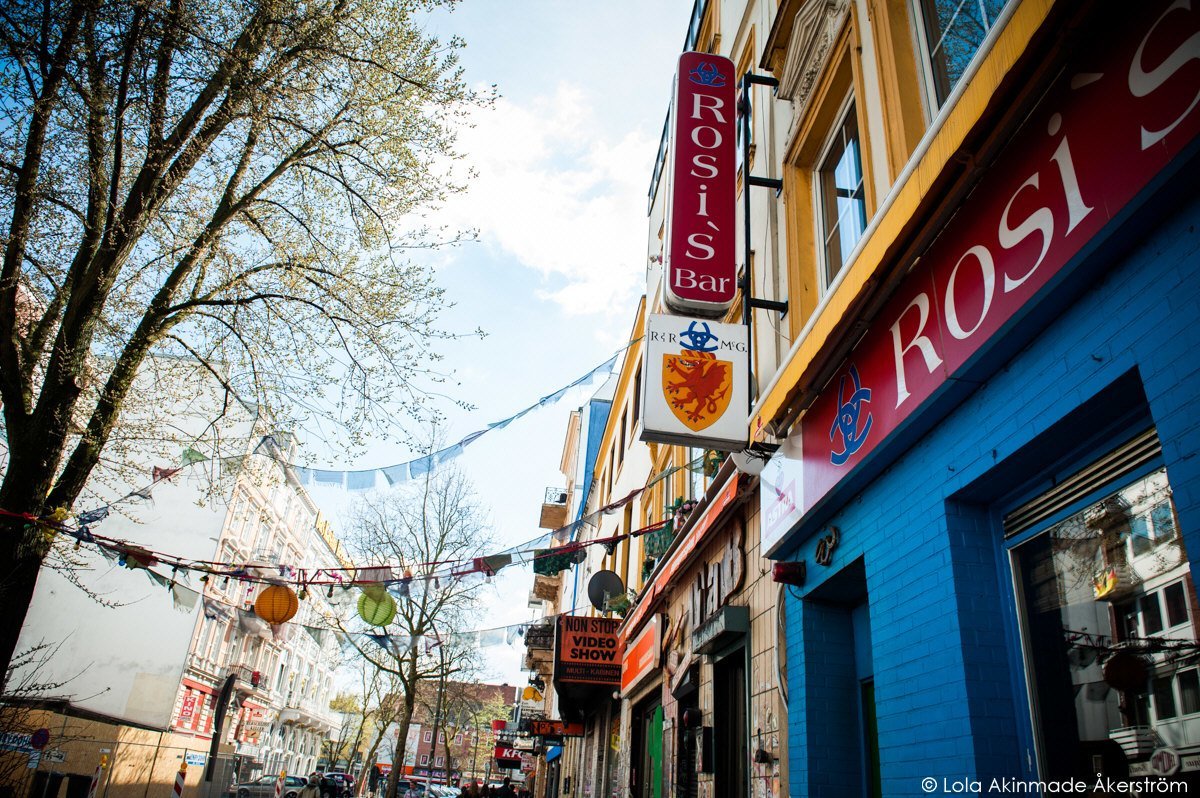 I set no expectations for Hamburg. Mostly because when I travel, beyond reviewing any cultural nuances and customs to be aware of, I usually go with a very rough plan so I can organically soak up the place.

One thing I did know for sure was that I wanted to explore Hamburg through its culinary scene and various gastronomy experiences. Being one of the largest port cities in Europe close to both the Baltic and North seas, seafood plays a heavy role culturally and I wanted to learn about various food traditions inspired by fish and shellfish native to the city and region.

Located along the Elbe River, Hamburg itself has been and remains a very transient city for centuries. Over 15,000 ships from over 100 countries pass through its harbor every year. From sailors, captains, and cruisers making port calls to people coming in for stag and hen parties before the proverbial “I do”. 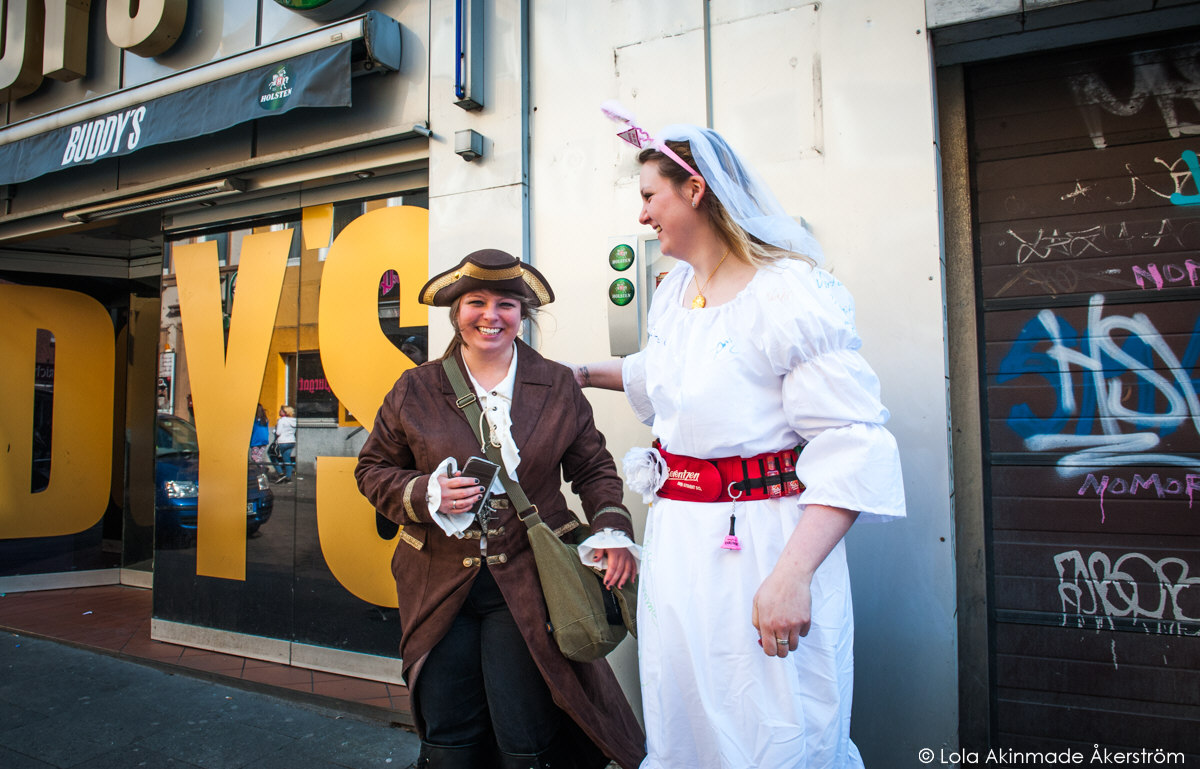 And where there is an active port, there is an equally active and oftentimes double eyebrow-raising vibe that is both laid back and stressed, pleasant yet provoking, inviting but also secretive with a red light district a stone throw away from churches.

For me, that vibrant dichotomy is the district of St. Pauli in Hamburg. 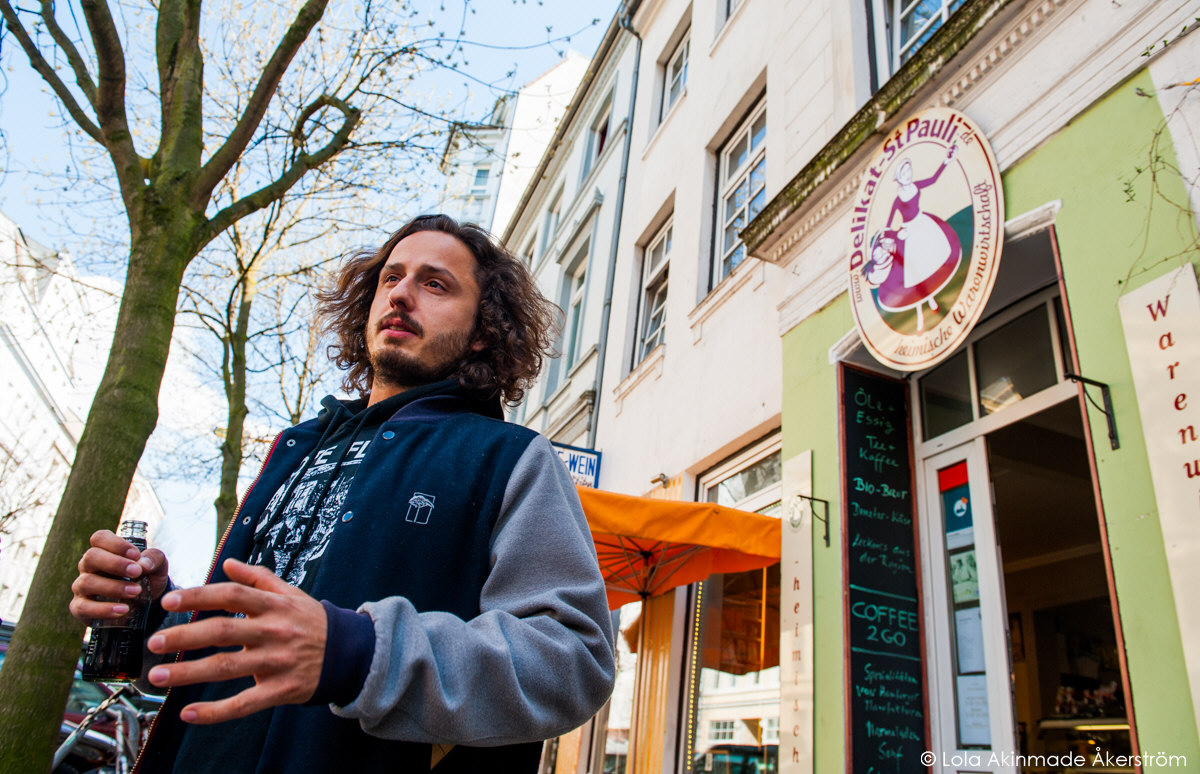 I met up with Max who was born and bred in St. Pauli. For over three years, he has been leading walking food tours through this quarter he knows like the back of his hand. We were going on the Satt Pauli Food Tour – one of several food tours in Hamburg – that would wind us through narrow streets and squares as well as along the infamous Reeperbahn – a popular street packed with nightlife and known as the sinful mile (die sündigste Meile) in German.

Reeperbahn’s rise to fame started in the 1950s as rock and roll slowly seeped its way across Europe. Tiny clubs lining the street acted as refuges and sanctuaries for up-and-coming British and German bands. A certain band called The Beatles lived in St. Pauli and played at the Star-Club before becoming stratospherically famous

Today, it’s a hodgepodge of restaurants and bars sandwiched between strip clubs and sex shops.

But I was here for the food. 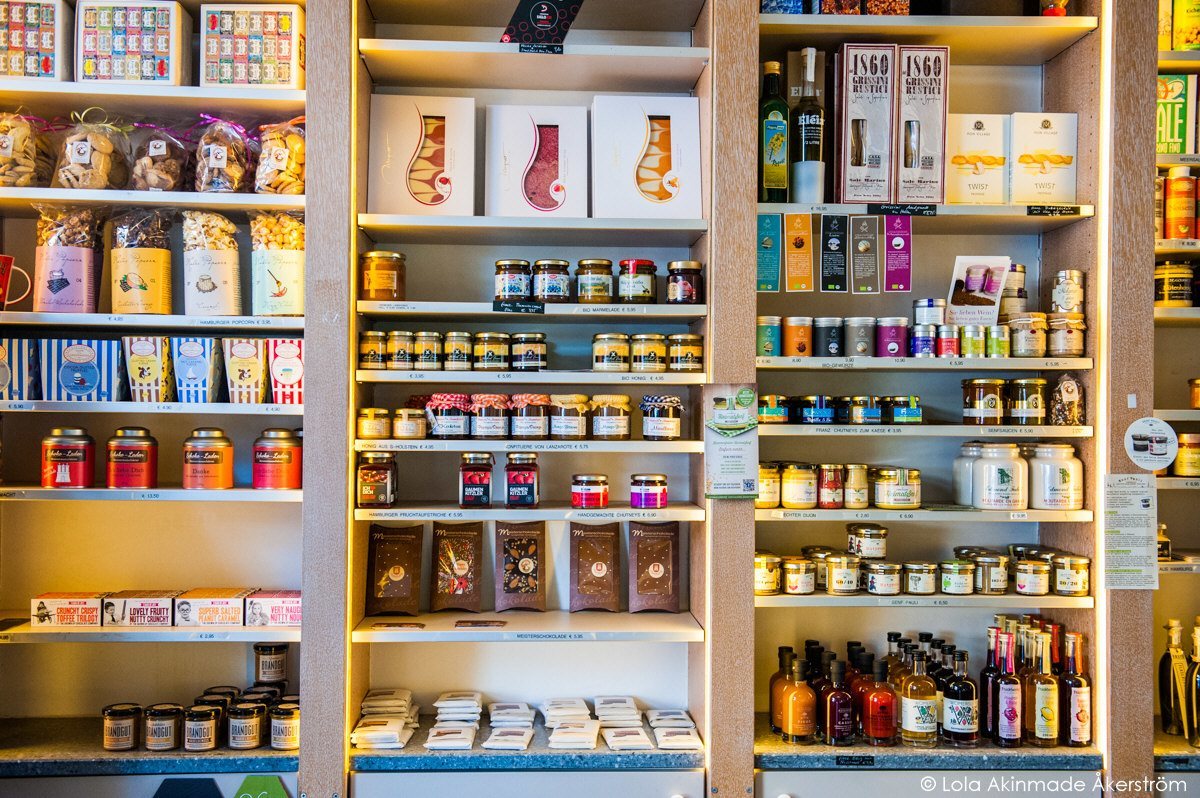 If there ever was a culinary patron saint of the quarter, it would be Delikat St. Pauli. Starting out as a creamery over 100 years ago, this 1940s-style little shop sells local produce and organic goods such as artisan cheeses, mustards, and chutneys as well as organic bread, sausages, and high quality wine at affordable prices.

Martin has been working at the shop for four years now and he put out a spread of various locally produced mustards for a taste test. While St. Pauli has its edgy face, there is also a more eco-friendly and sustainable side amidst the graffiti-lined neighborhood where some residents make their own products and grow their own veggies. And Delikat St. Pauli’s aim is to showcase and support its local community. 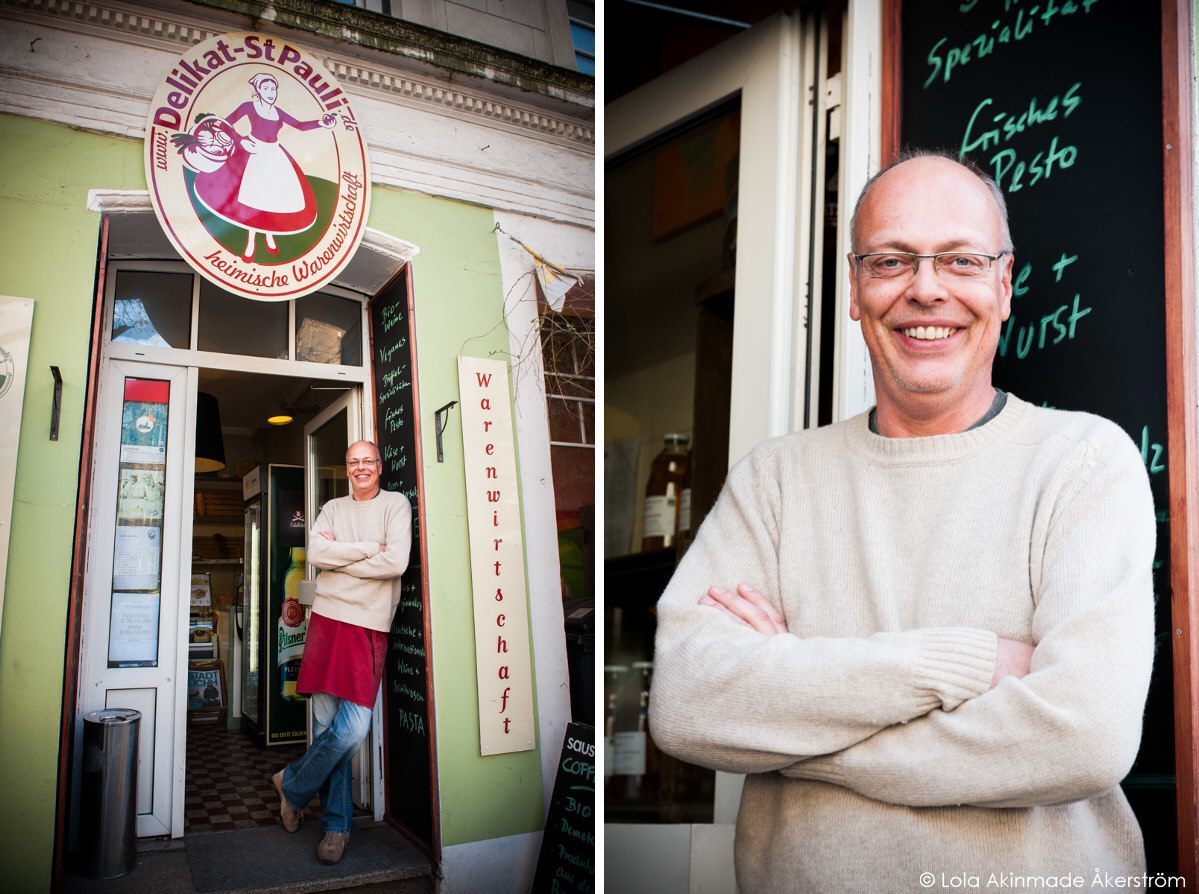 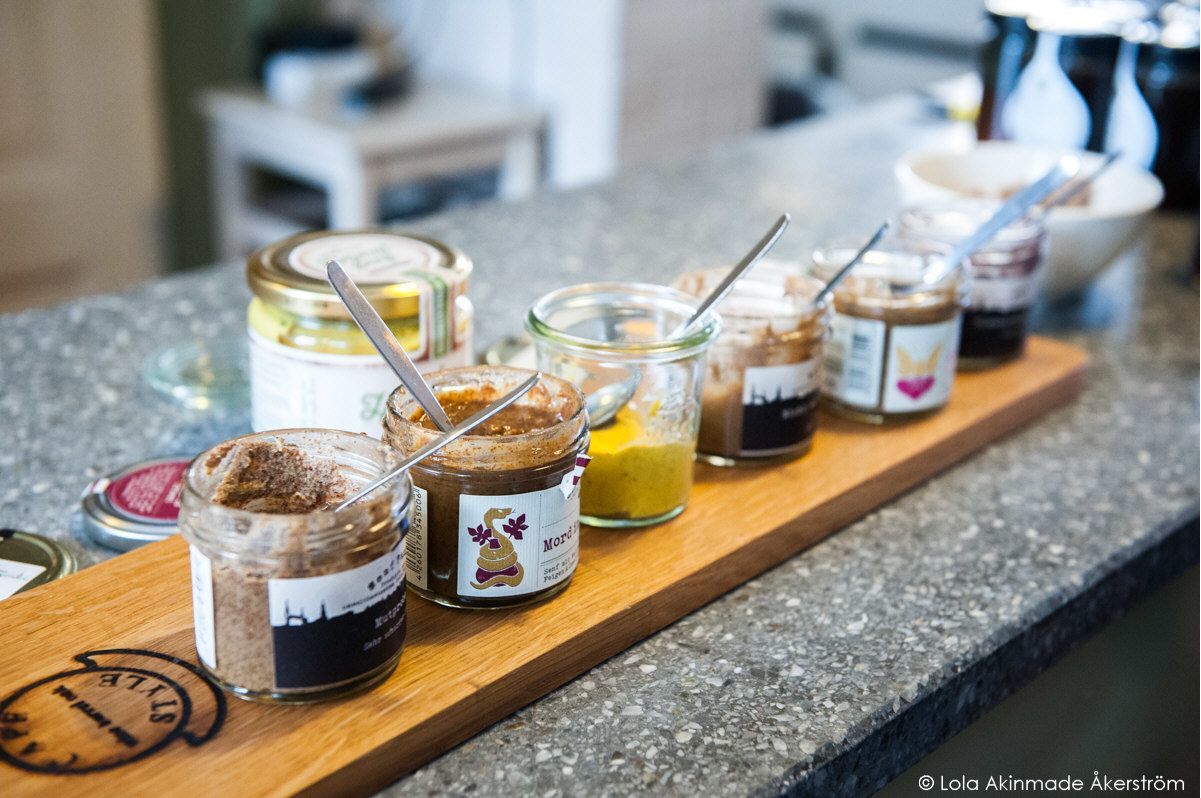 Next up was a blush-inducing stop for this prude at confectionary store St Paula where the sweet little cupcake logo on its sign hanging overhead was far from what we found inside. If the black crossbones and skull sign was any indicator, we were bound to find sweets and chocolates we probably couldn’t devour in public without stares. 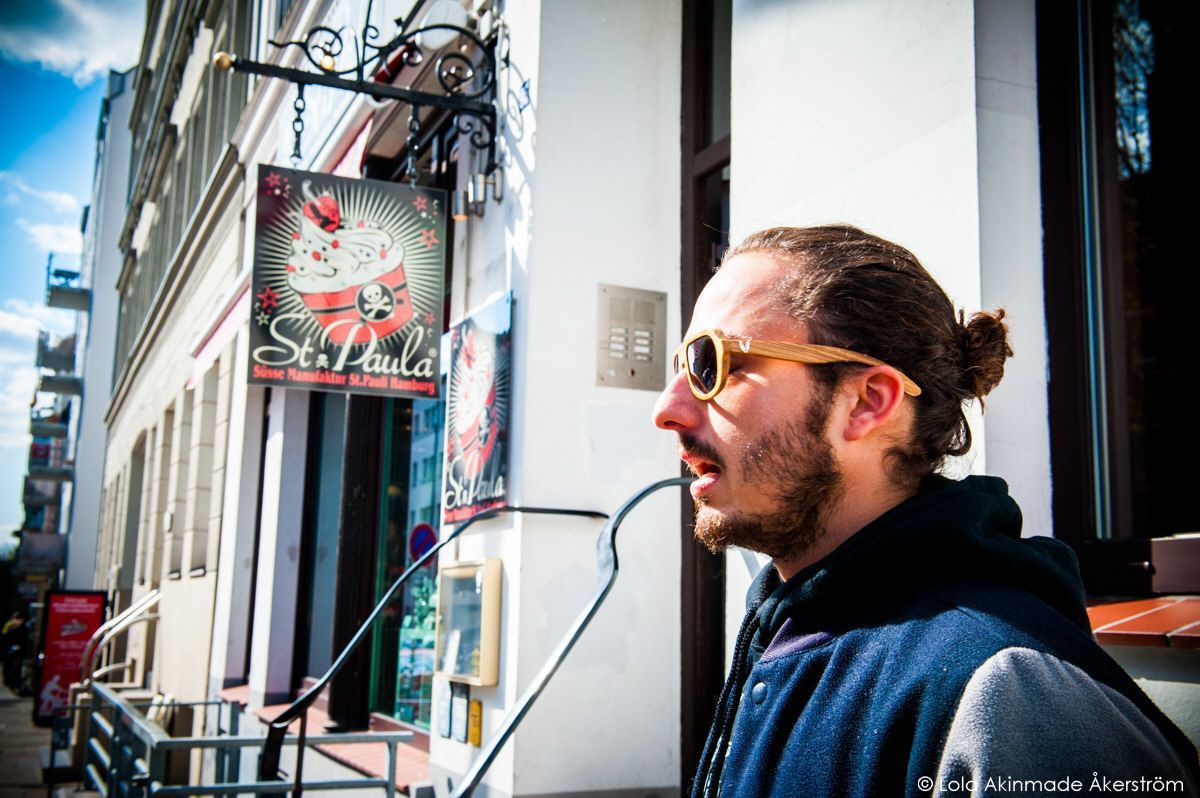 Vibrant posters of burlesque dancers and pinup dolls lined its walls and on display were various confections – from phallic chocolate sculptures to edible chocolate handcuffs. The salty tangy aftertaste of mustard from Delikat St. Pauli was quickly doused out by caramel pralines in the shape of skulls. 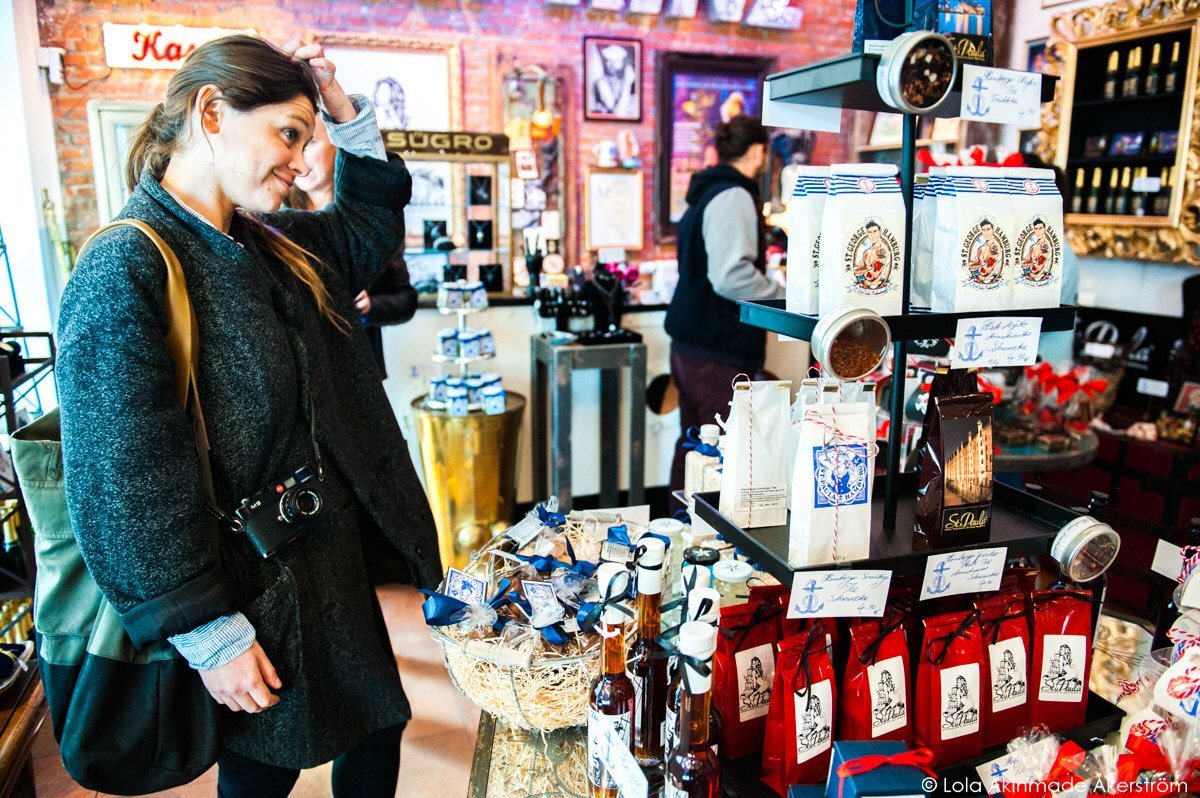 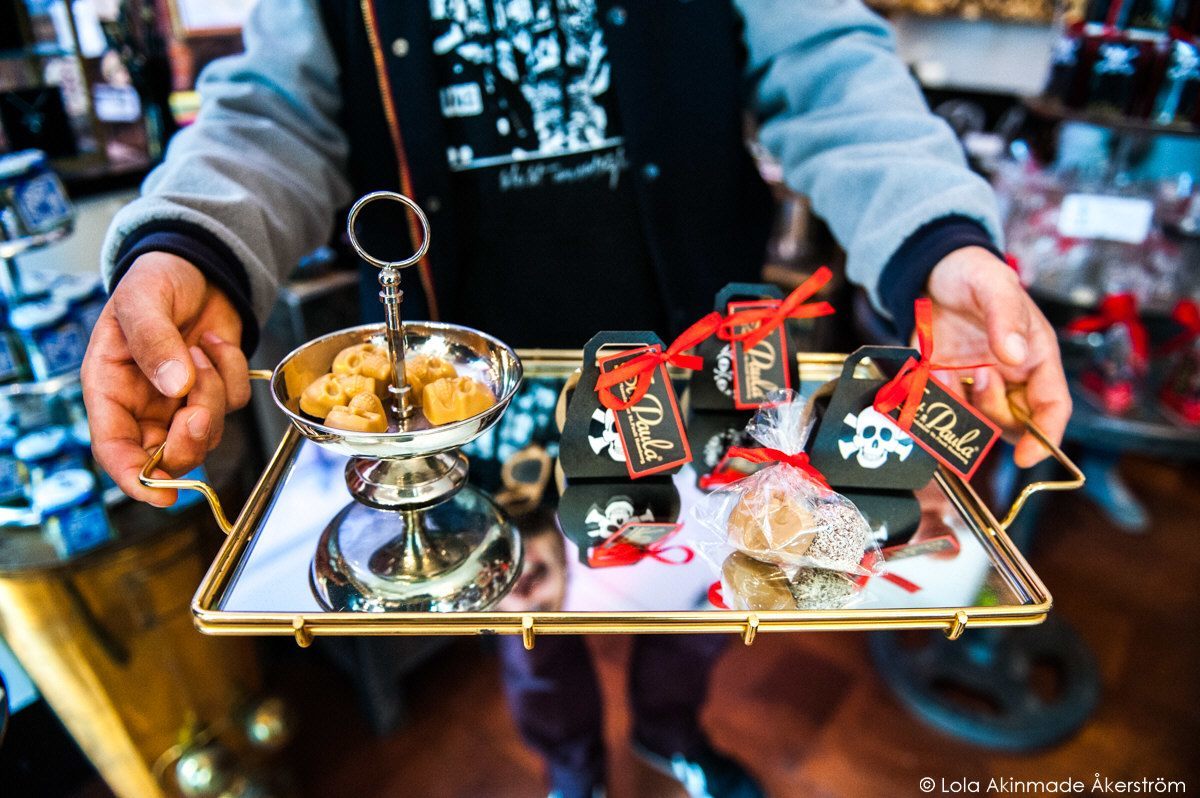 Exploring more of the red light district – Kiez – part of St. Pauli, we swung by a vegan fast food joint called Bevegend Befried Vegan Fastfood. While I’ve never tried being a vegan (too much of a carnivore for that), the concept of merging fatty fried fast food and veganism seemed counterintuitive to the whole movement to me and so this store certainly piqued my interest.

I tried their version of a classic Wiener schnitzel – a thin lightly breaded and fried cut of boneless veal that, when cooked properly with a crispy outer layer and a succulent core, is about as European soul food as you can get.

And a very pleasant dining experience, I might add.

Their vegan wiener schnitzel was made from some gluten-free matter and topped with a dairy-free mushroom sauce. I wanted to hate it with every fiber of my being to justify why I stick to animal protein.

But I couldn’t. Hate it that is. That schnitzel was superb.

While I probably won’t order their vegan imitation currywurst off the menu, a short walk over to Kiez Curry sated that appetite for what has arguably become Germany’s signature dish – the currywurst. 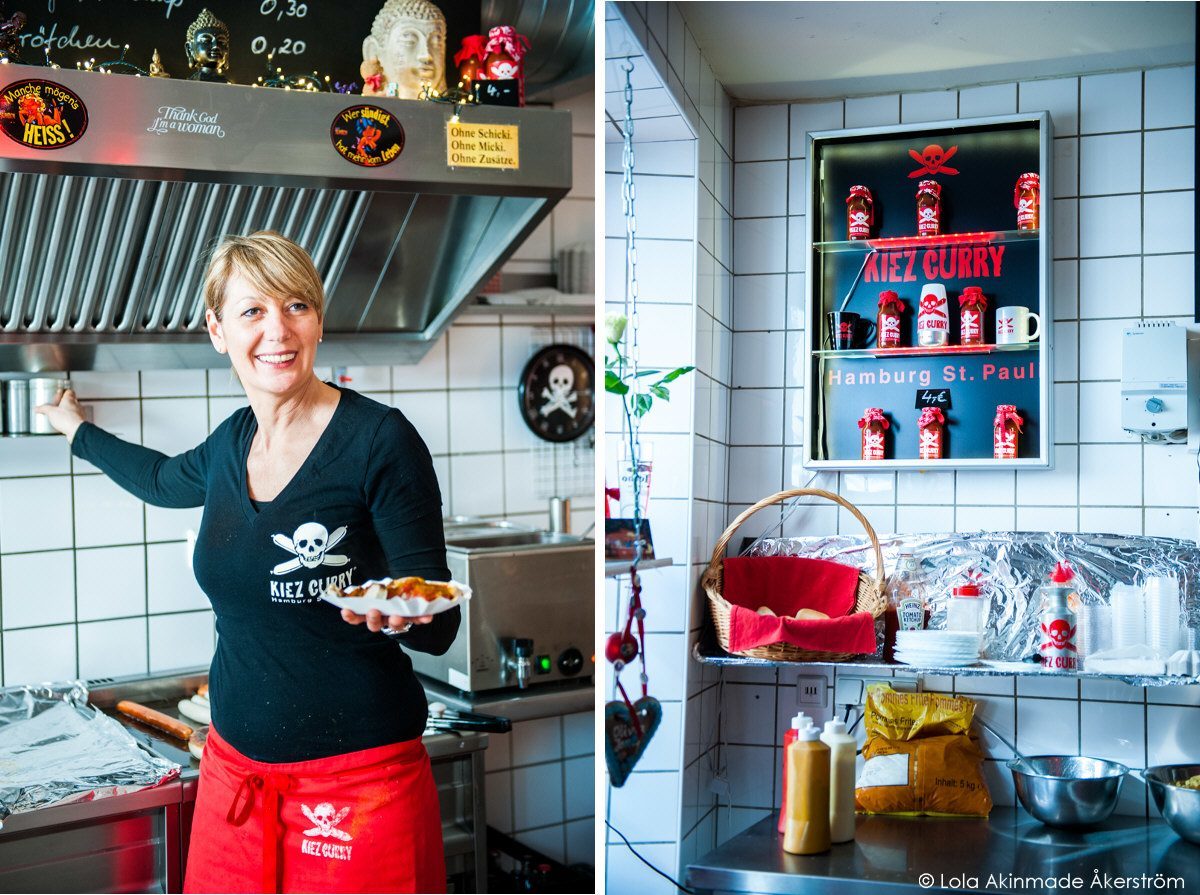 In a nutshell, currywurst is steamed and then fried pork bratwurst (sausage) that is chopped up and then topped with a tangy tomato ketchup and curry powder. The beauty of the currywurst is that it is usually served on a paper plate with a plastic or wooden fork as a reminder that you are indulging in fast food regardless of what’s going on in your mouth. And yes, there is a currywurst museum in Berlin.

At Kiez Curry which is known for its homespun sauces, I tried three flavors ranging in spicy kick, and as with all homemade flavors, their recipes and ingredient lists are probably in a bank safe somewhere. 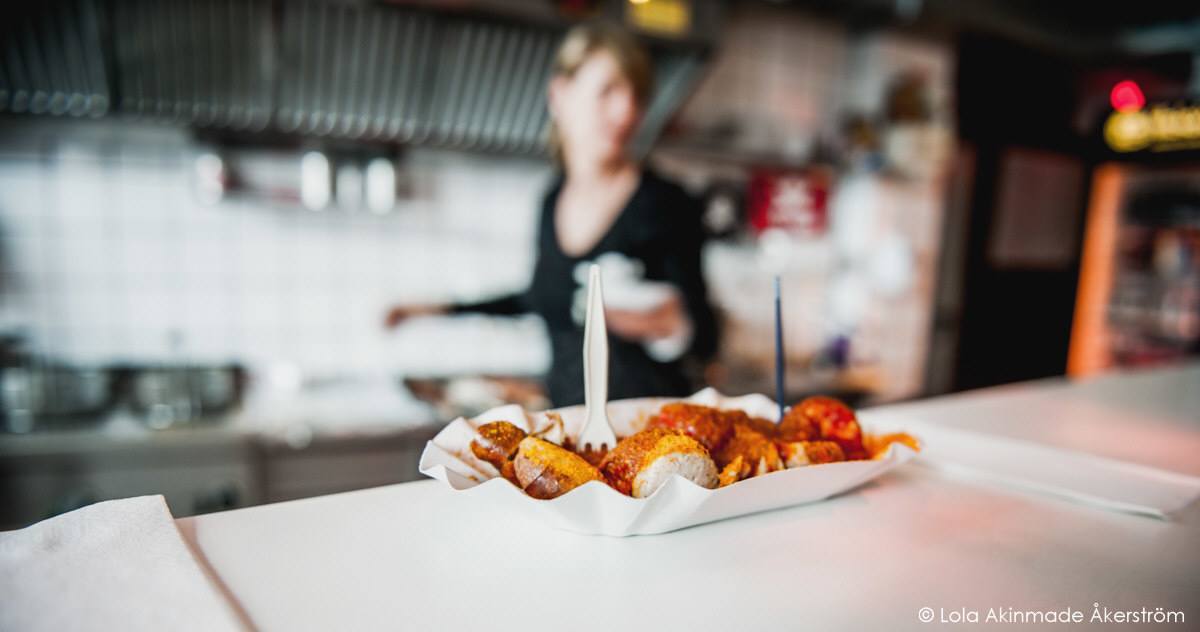 And my sweet love… the fischbrötchen. If there ever was a fast food crafted by fishermen and seafarers who live out their lives at the mercy of the seas, it is this quintessential fish bun or sandwich filled with either pickled (Bismarck herring), soused (Matjes herring) or fried fish and topped with onions, lettuce, and remoulade. Other fillings include crab and baby shrimps. Pickled herring is certainly an acquired taste and one which I promptly acquired when I moved to Sweden as a lover of all things seafood. 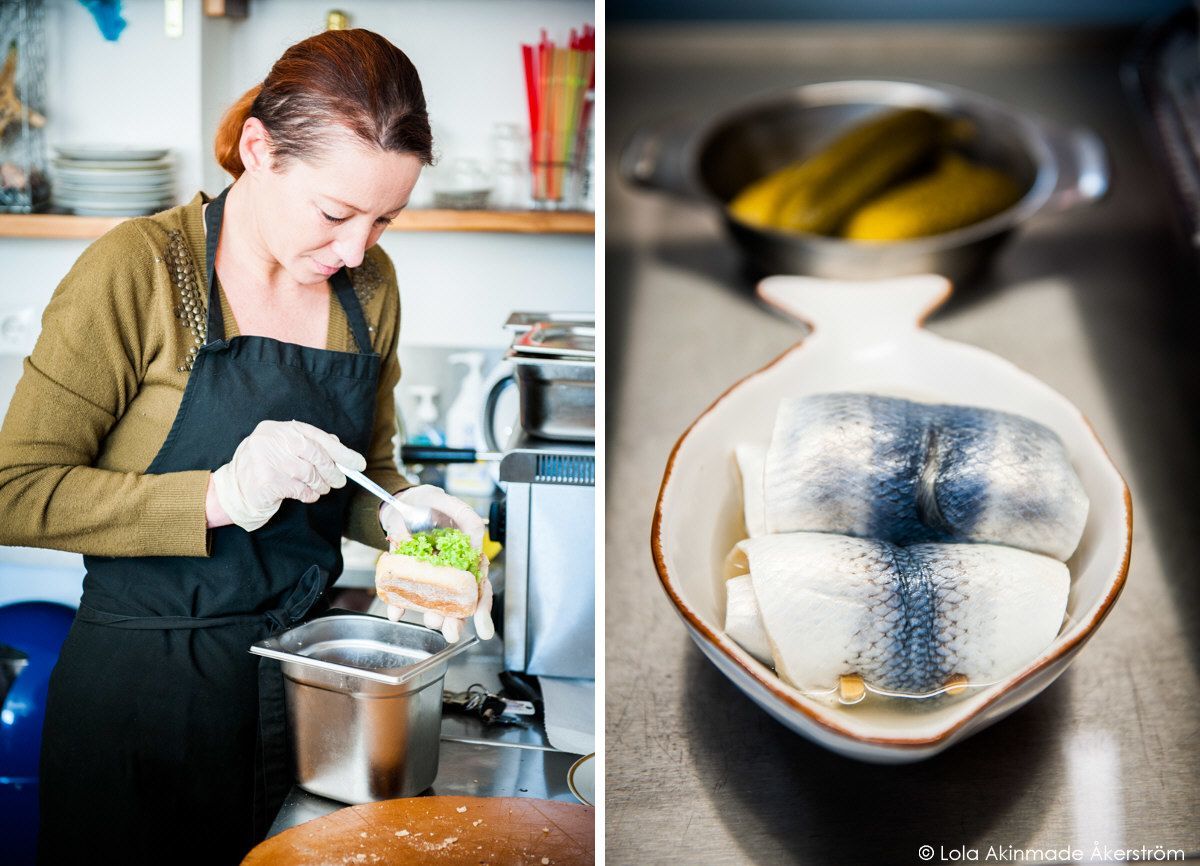 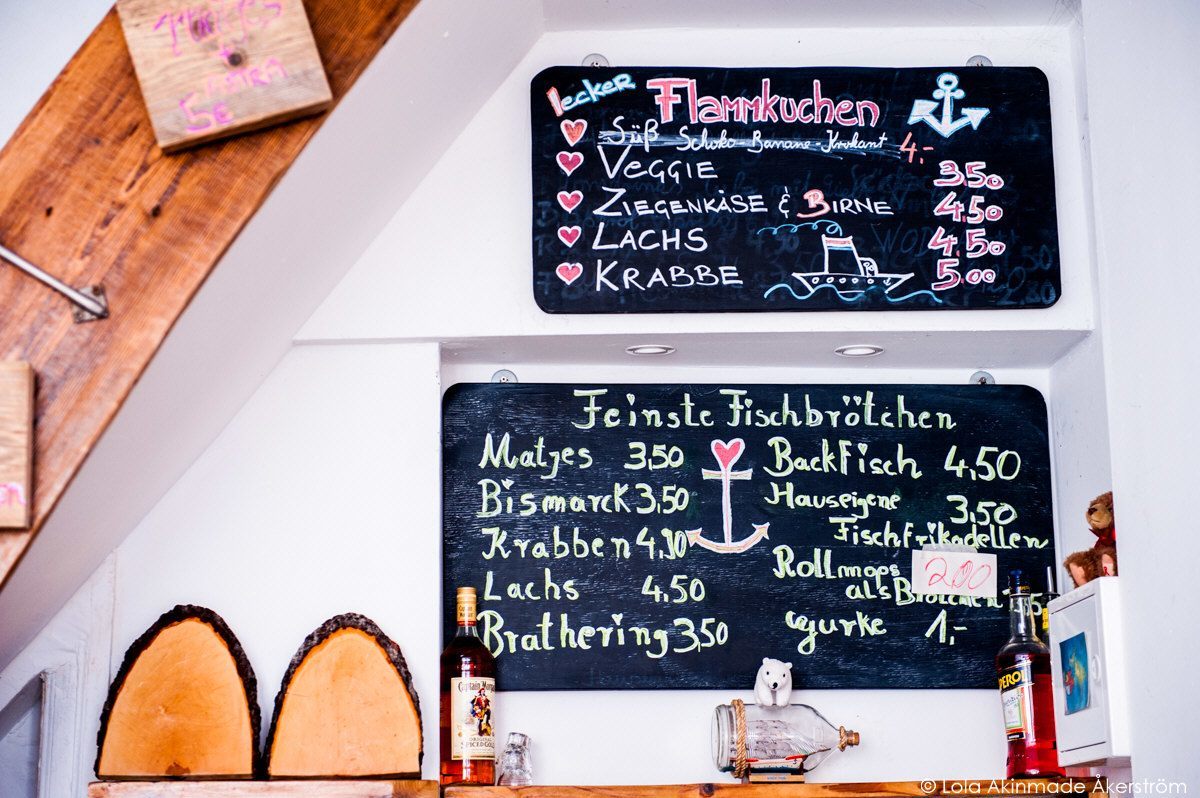 So stepping into Kleine Haie Grosse Fische to sample various types of fischbrötchen felt very familiar at my first whiff of herring. In the past, fish buns were mostly sold at the fish market but this shop which is located in the red light district was opened in 2013 by Heiner Harhues. Harhues worked for 15 years as a skilled shipbuilder in Hamburg’s port and today, is the mastermind behind Metalwoerx where he creates new and repurposes old items to create unique interior designs. You’ll see touches of revitalized wooden surfaces this all over the tiny shop. 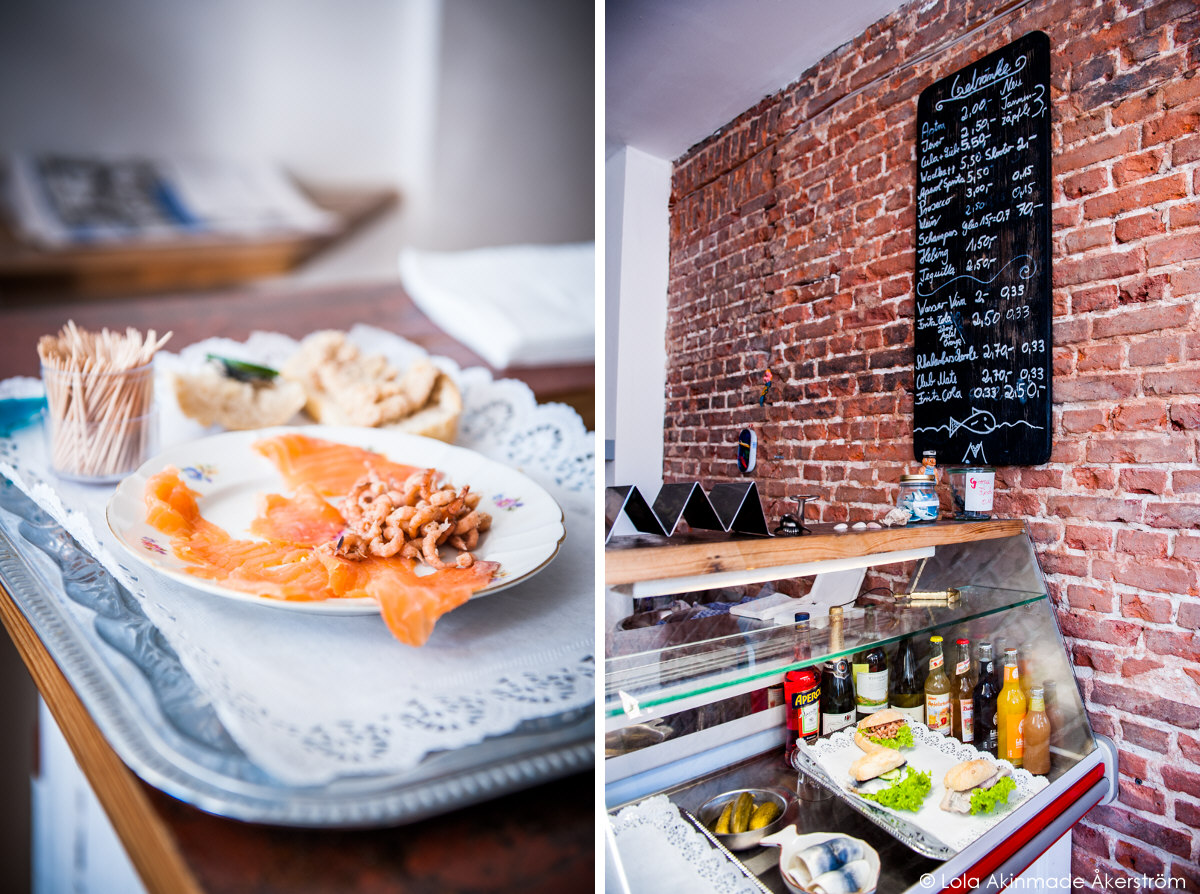 In Stockholm, we eat our pickled herring with boiled almond potatoes. In Hamburg, it is eaten stuffed in a bun. Because when you’re roaming the streets, sights, and smells of St. Pauli after a night of reveling and you’ve lost your fork-and-knife coordination skills, the fischbrötchen is the perfect late night snack. 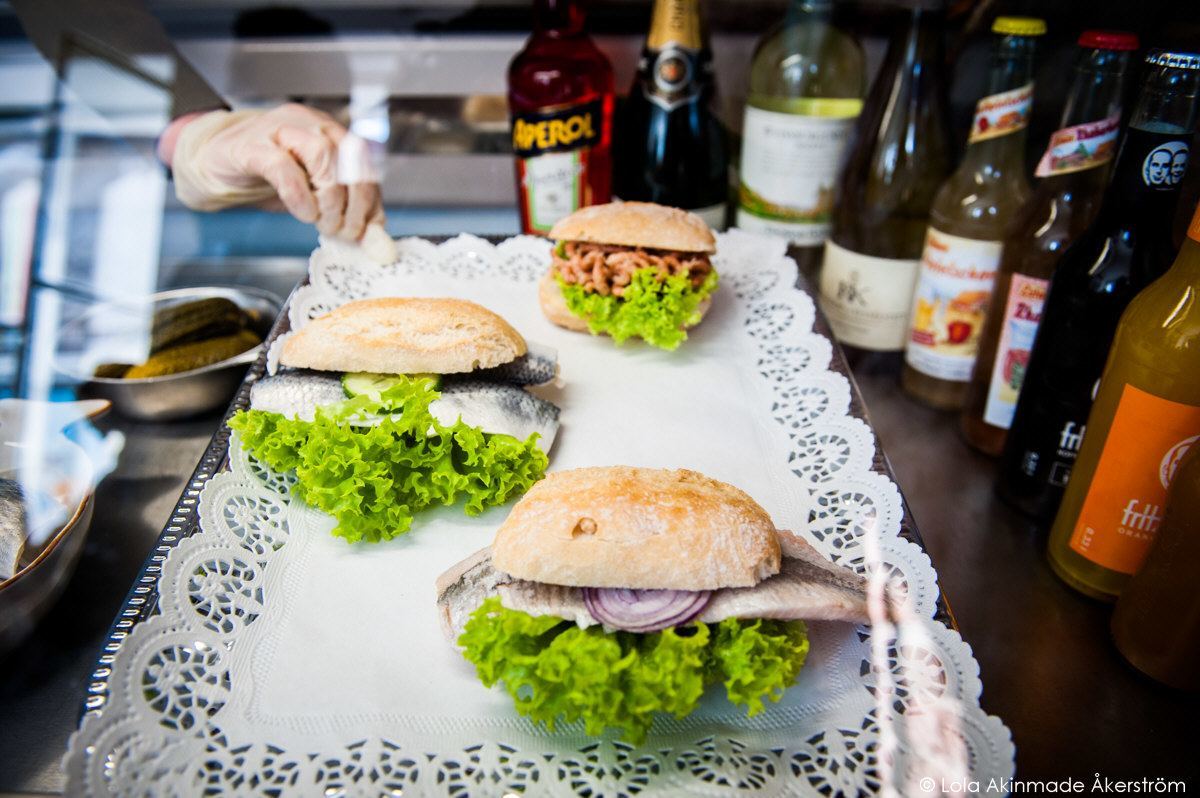 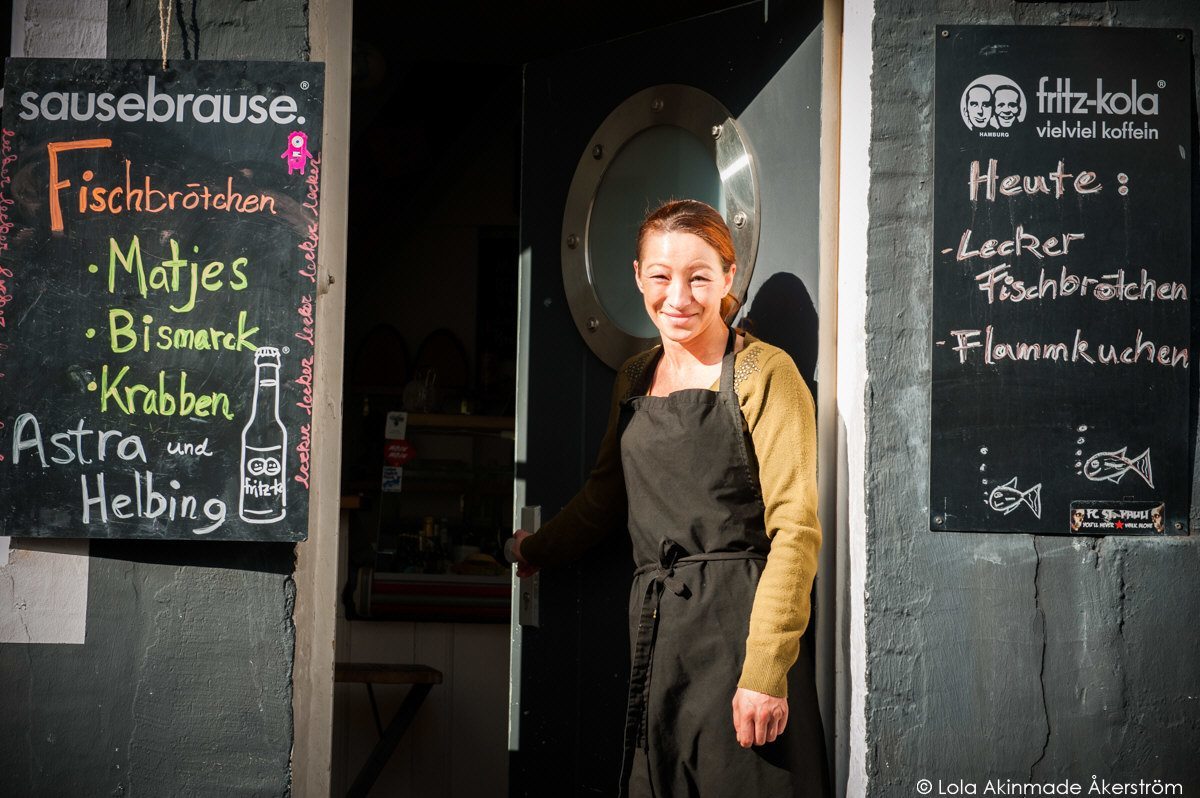 Here are a few more shots from St. Pauli. 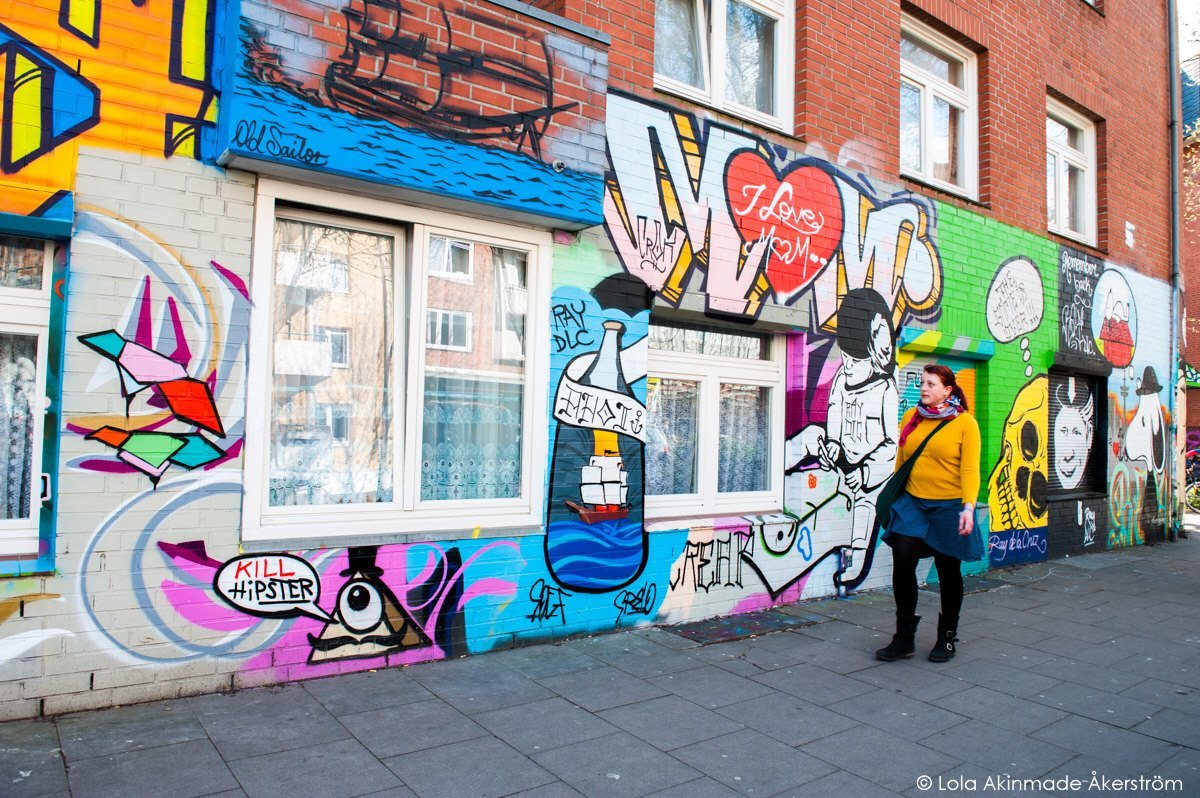 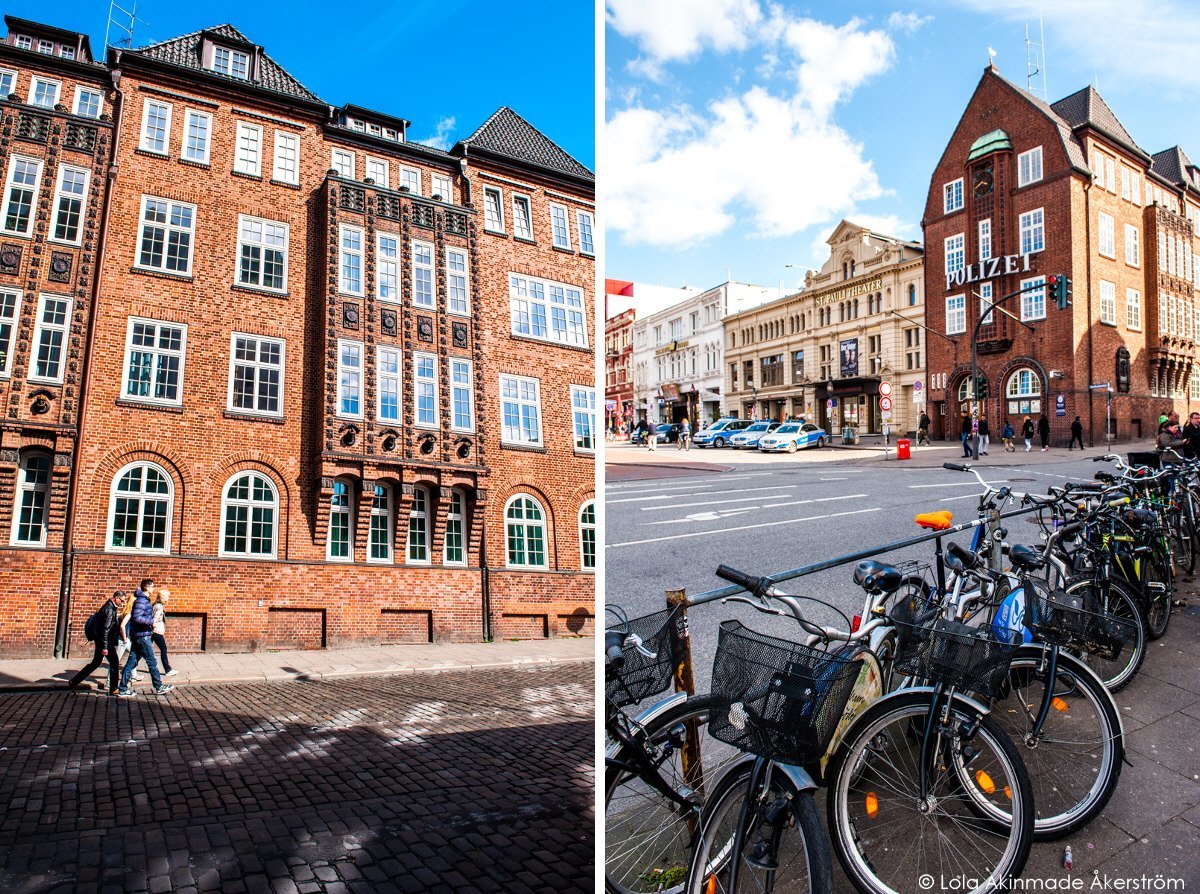 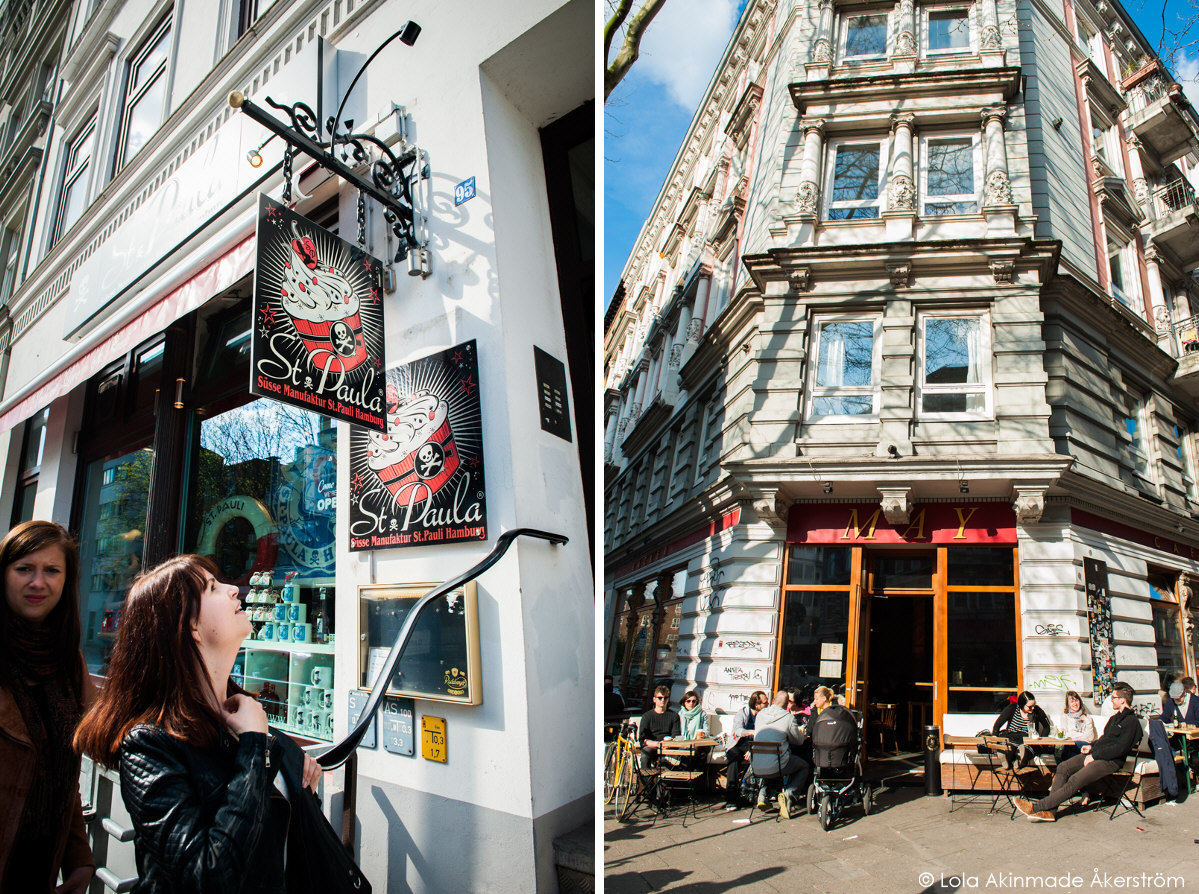 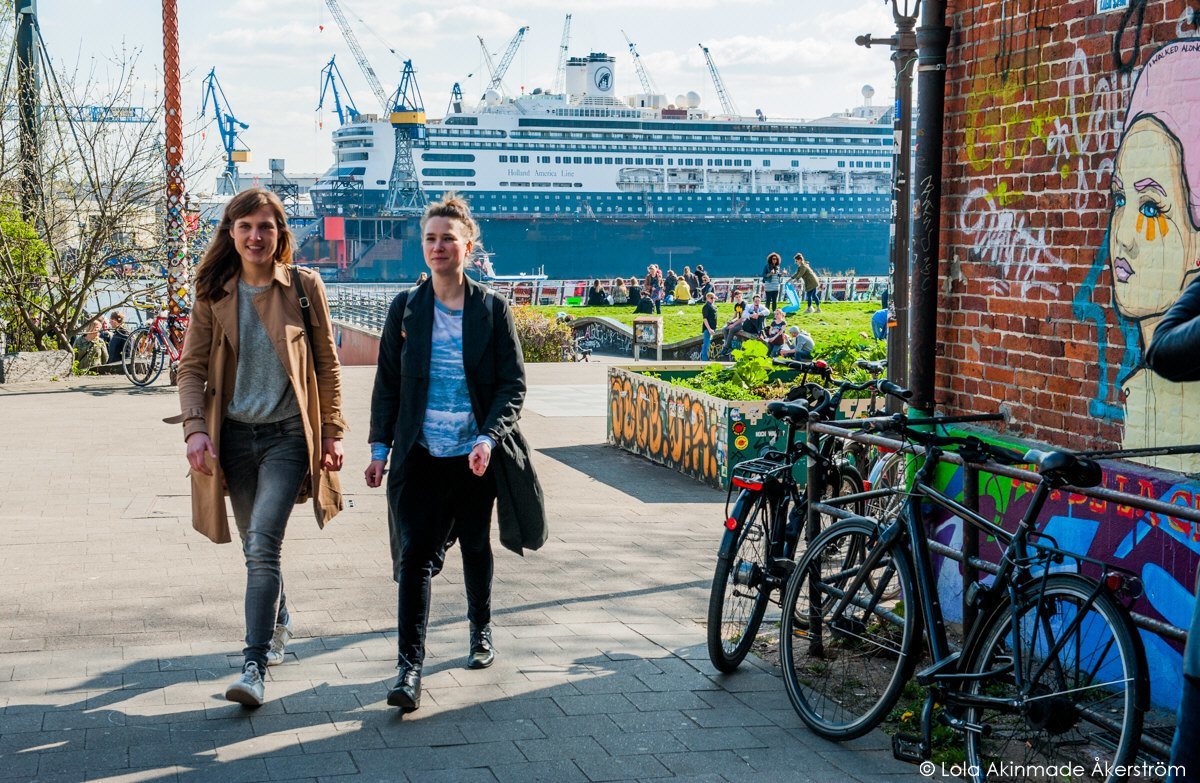 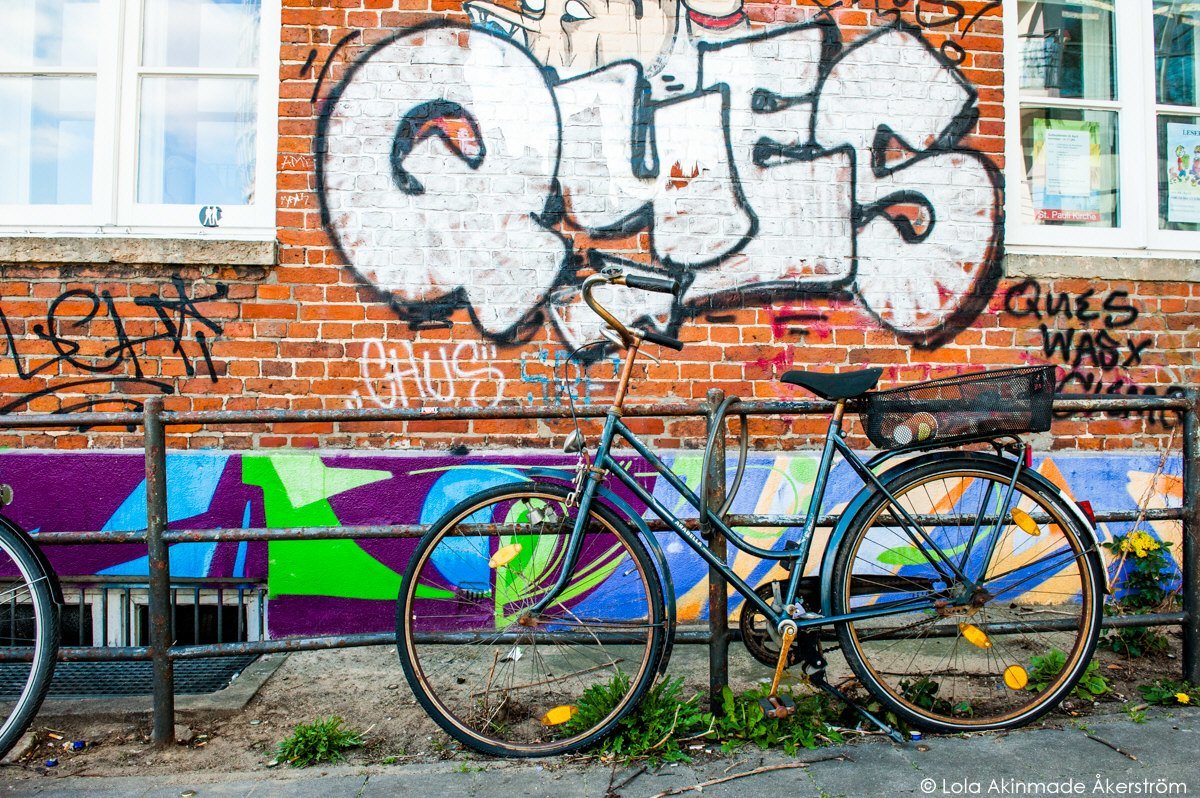 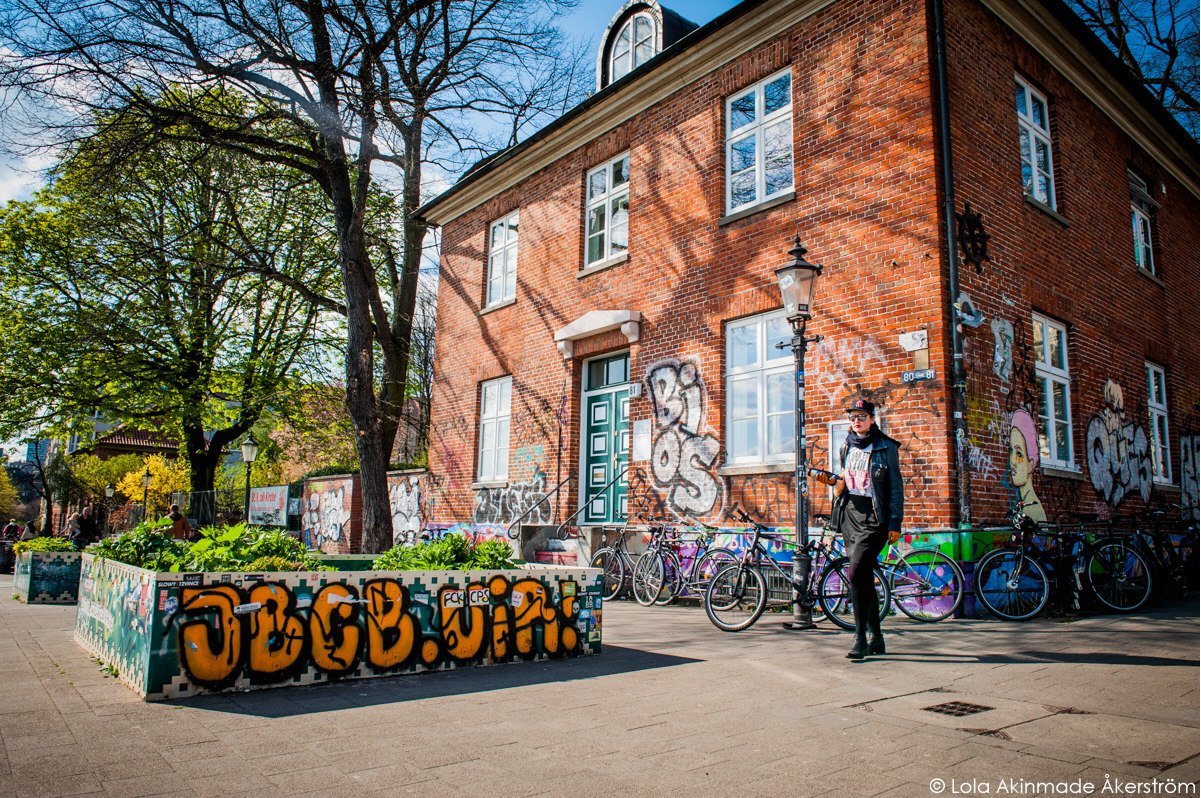 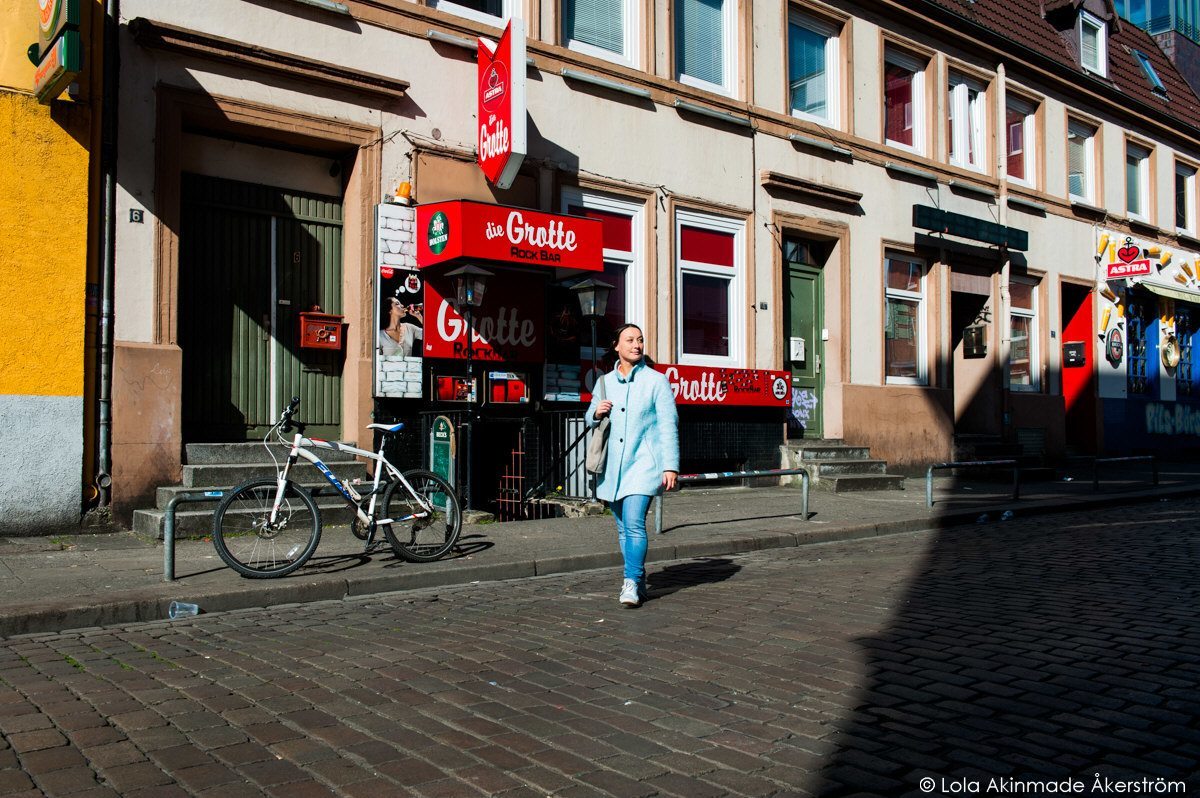 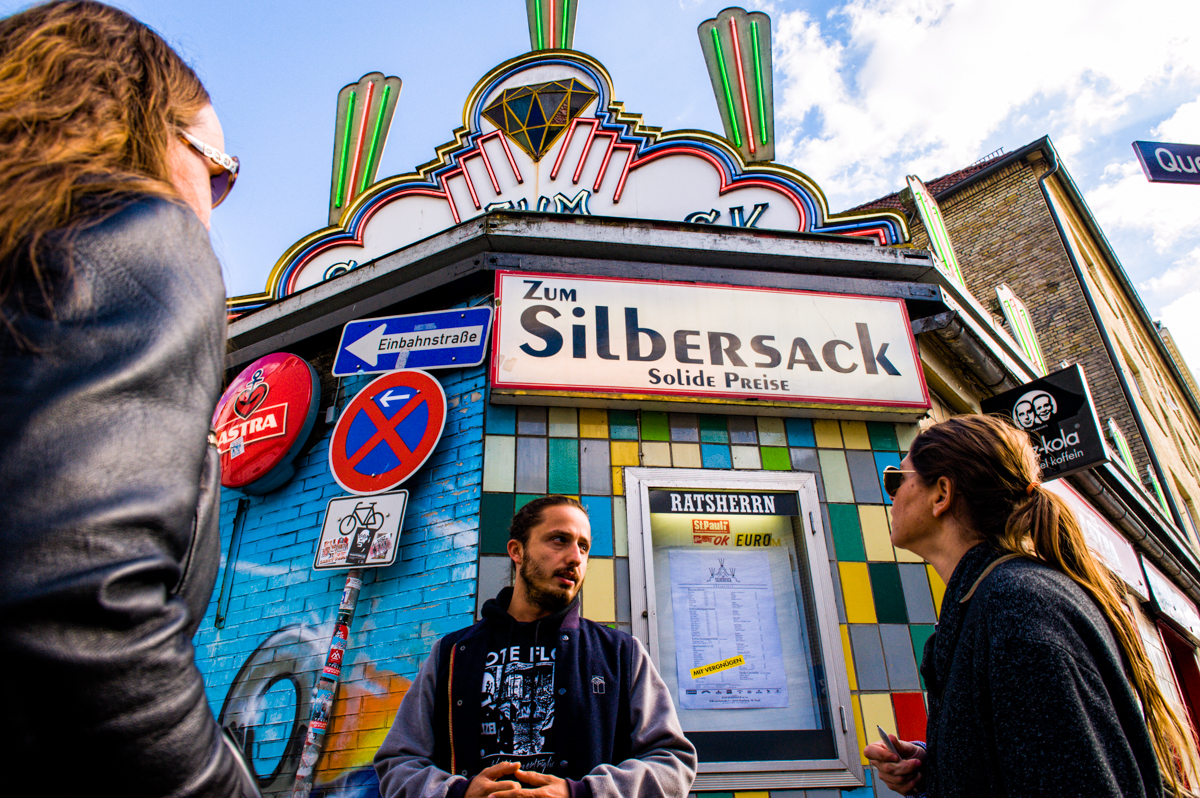 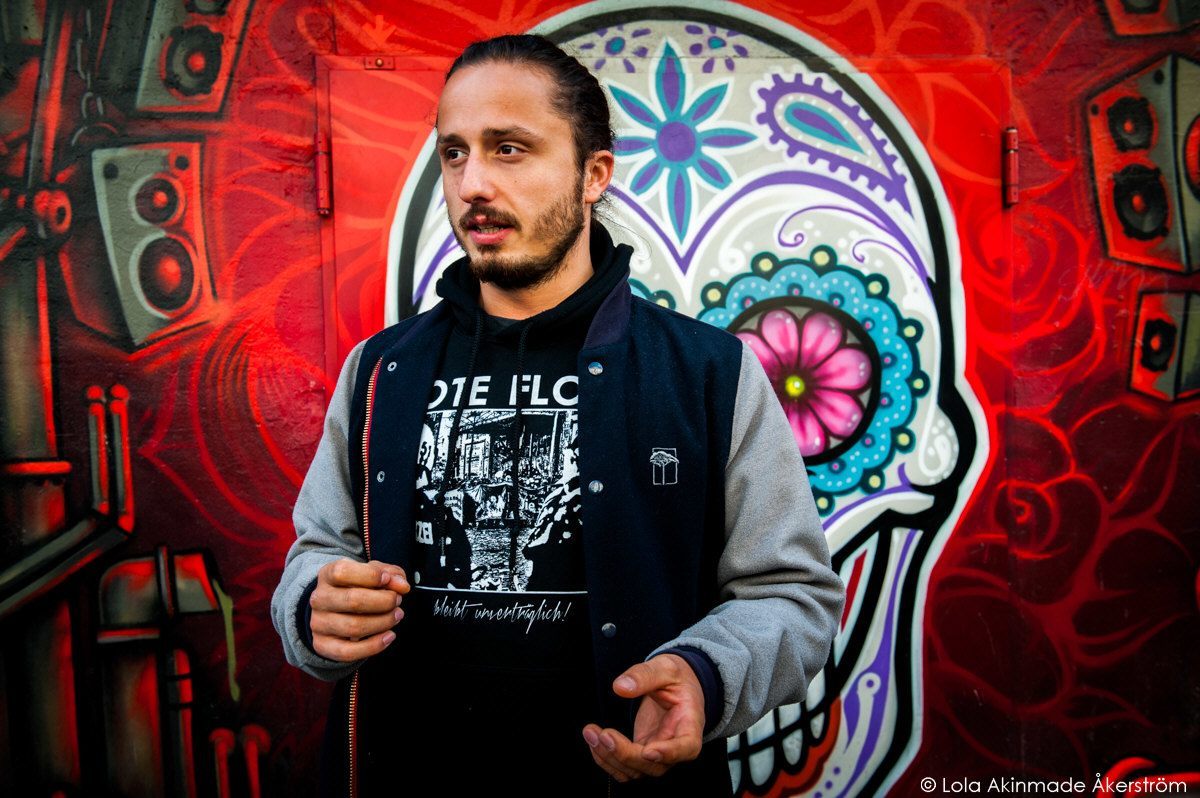 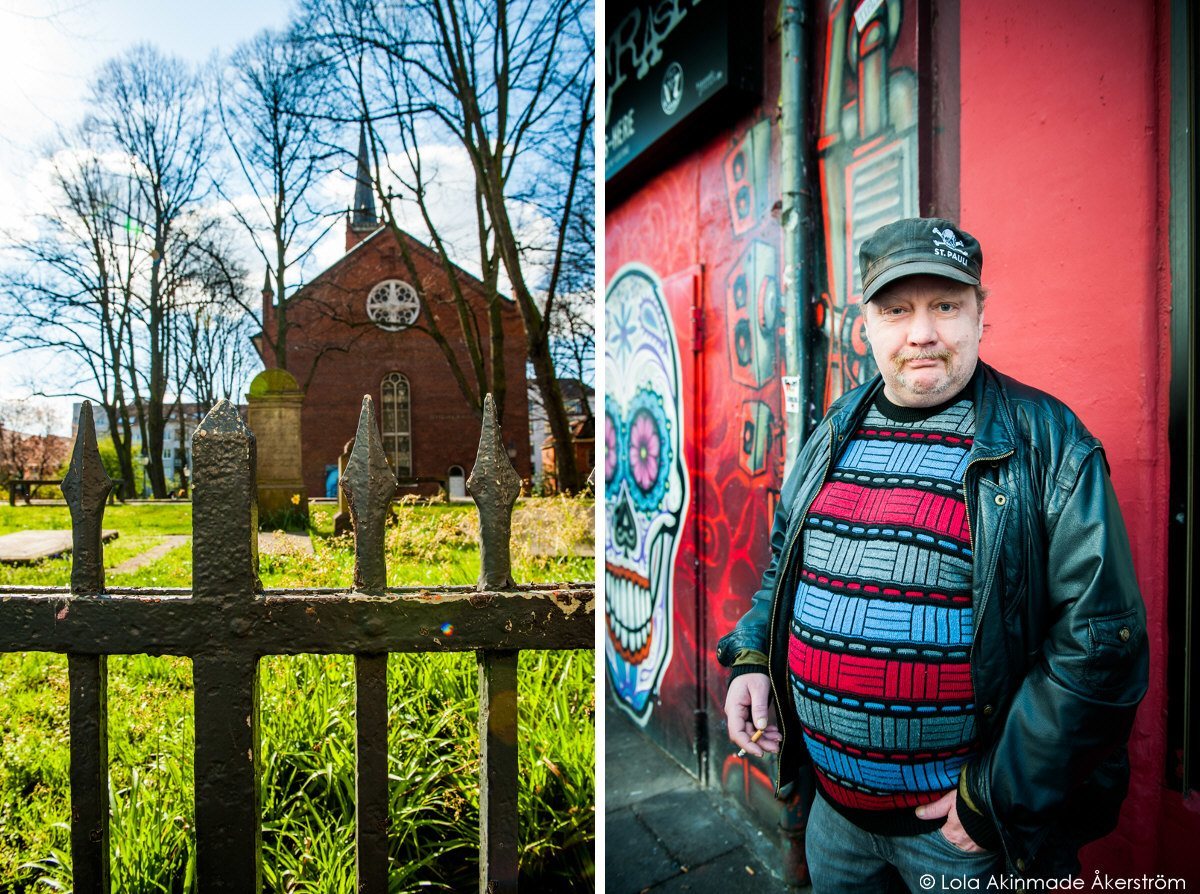 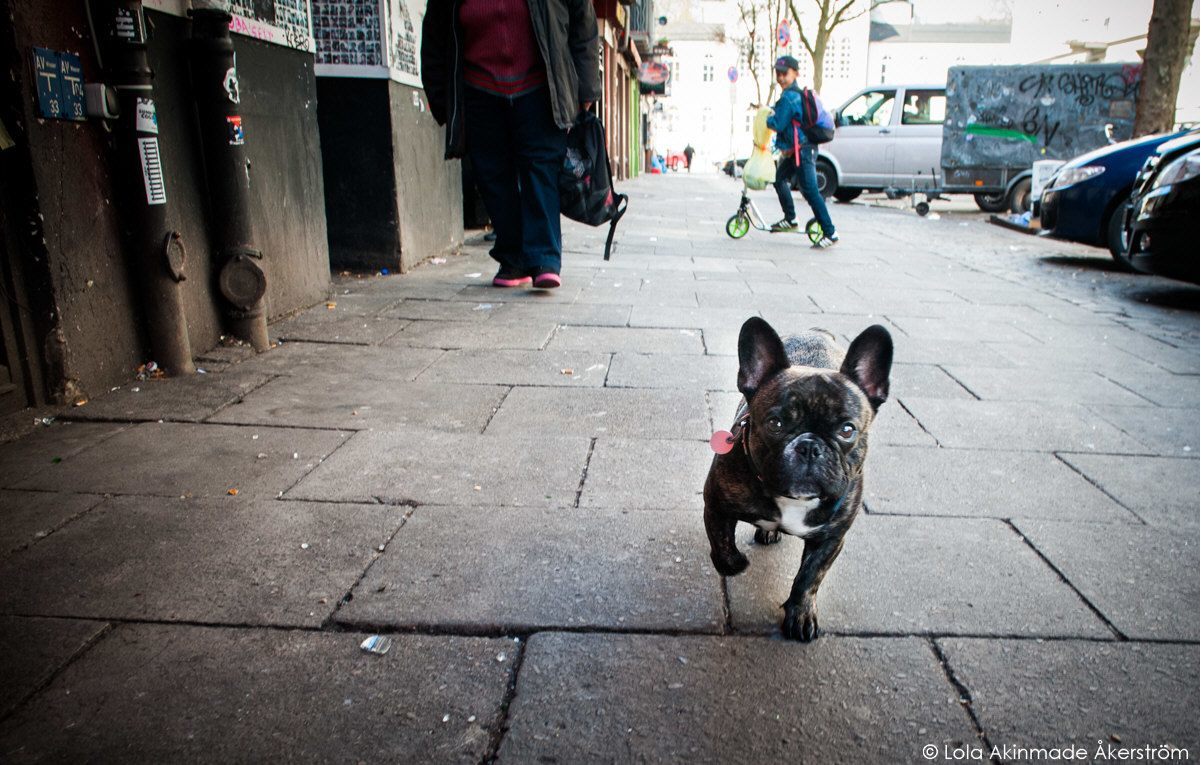 You can check out a ton more photos from St. Pauli and other parts of Hamburg in my imagebank. As part of the #JoinGermanTradition campaign, I explored the Hanseatic cities of Hamburg and Bremen as a guest of the German National Tourism Board.