Alpha put me to shame.

Under the near 100 degree oppressing heat of Egypt’s Arabian Desert, her lean muscular frame was arched over the handlebars of her mountain bike with beads of sweat racing down her face. She occasionally took quick swigs of tepid water from her water bottle while forging on; digging her wheels into thick sand and fighting through loose layers with rolling sand dunes in the background.

I’d already given up a few miles back and was riding in the back of our supply pickup truck next to my bike in defeat. The stench of my embarrassment filled our truck considering I was at least 40 years younger than Alpha. 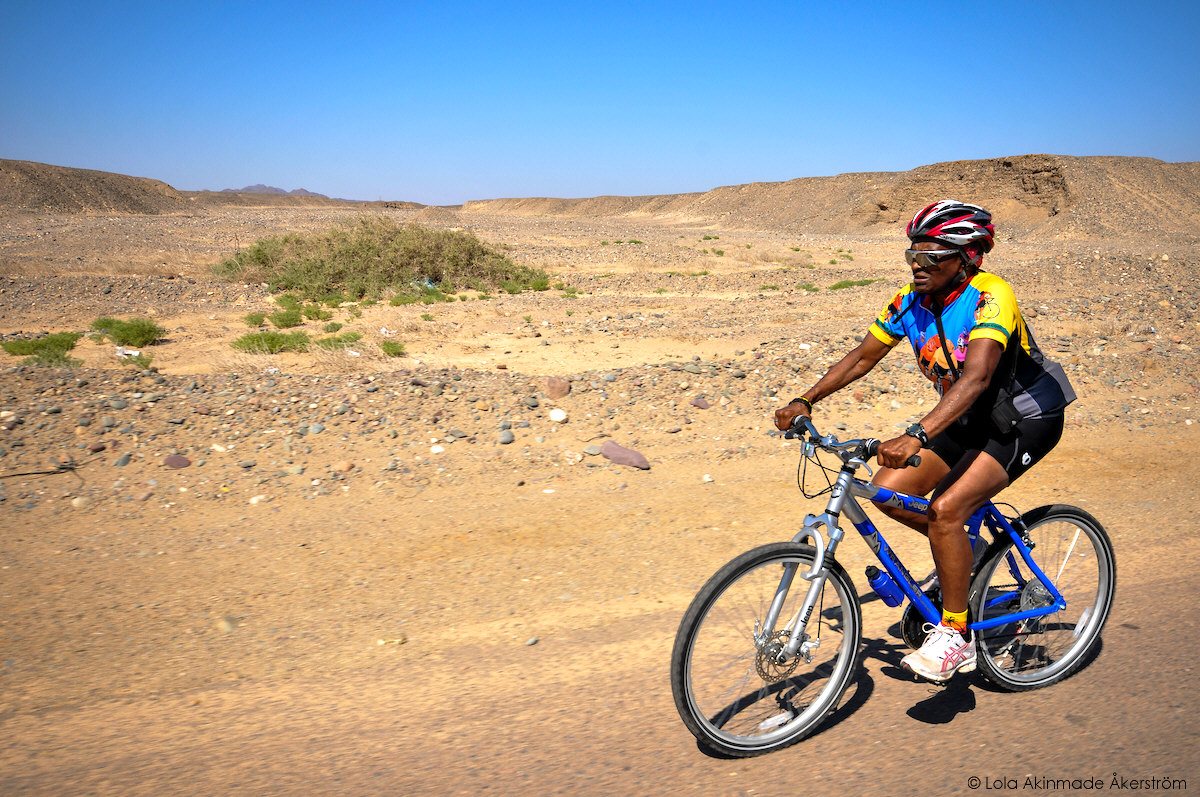 Already in her early 70s, I met African-American triathlete Alpha Bennett several years ago while on a biking tour of Egypt. She frequently left us behind in the dust as we cycled through scorching desert making our way from Hurghada to Luxor with a cruise down the River Nile tucked in-between. A woman of few yet poignant words, I quickly realized Alpha was a doer not a talker and I wanted to pick her brain.

To know what turned her on and kept her going as an athlete for so long.

Meeting Alpha was what tuned me into this new breed of female explorers; women who seem to scoff at the aging process and beat it with every heart-pounding expedition and hair-raising thrill.

I wanted to find out what unique traits female adventurers who keep going on well into old age share so I reached out to three exemplary adventurers in their 60s, 70s, and 80s, including Alpha Bennett. 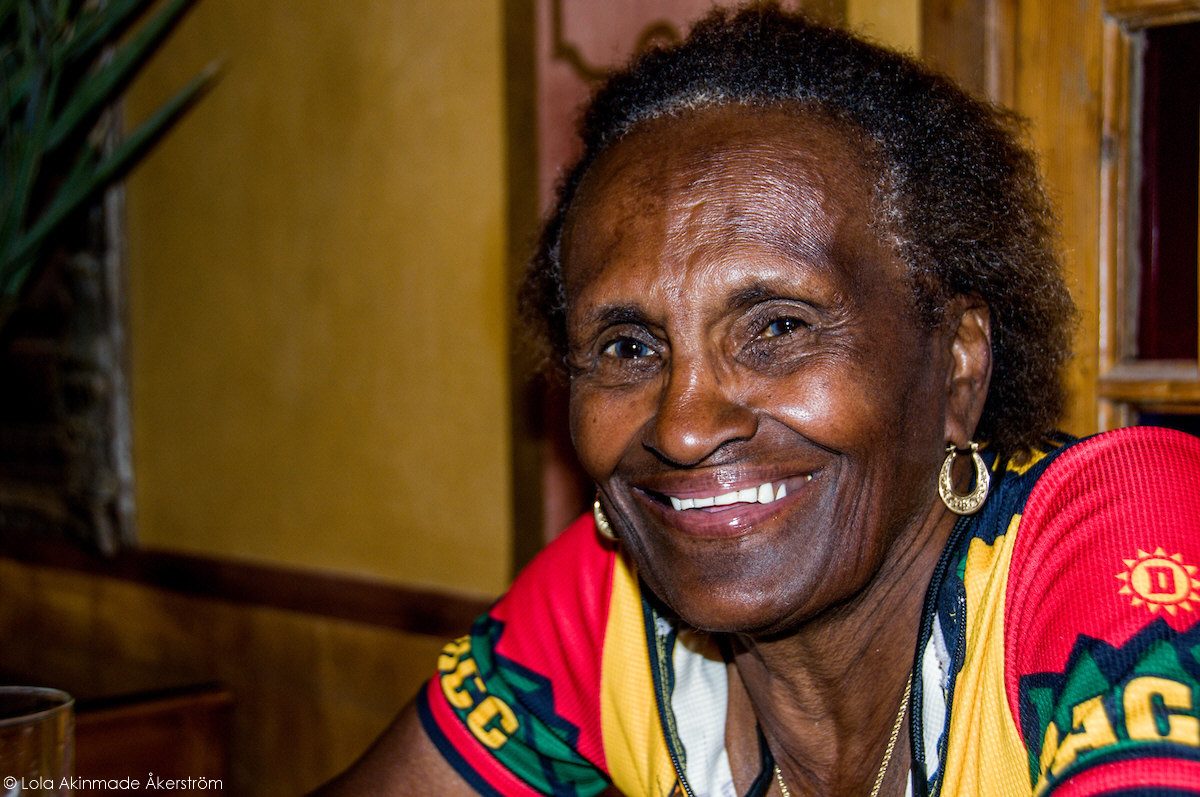 Growing up in Bermuda, Alpha was active in sports and participated in her middle school physical education (PE) classes. She migrated to New York for high school and went on to study and work as a lab technician. She met her now late husband who was in the Air Force during her time in New York. Becoming a military wife meant moving from place to place which fueled a budding love for travel.

But there was still a missing gap.

What drove her to take on extreme adventures and competitive sports instead of just leisurely touring Europe through the air-conditioned confines of a tour bus reserved for the elderly?
That spark was ignited when Alpha’s daughter who was in the Army Reserve Officers’ Training Corps (ROTC) invited her to join a boot camp-style exercise class. She was already in her 40s.

“This is fun,” Alpha reminisces of that sweaty physically challenging camp. “And at that moment, I realized I could actually enjoy doing this.”

The ‘this’ she was referring to meant pushing her body to its physical limits. To seemingly immortal extremes that shamed me, her junior, in the Arabian Desert on that hot day.

Since that simple boot camp class over thirty years ago, Alpha has explored roughly 50 countries and participated in hundreds of races. She has finished at least eight full marathons including the Akureyri Marathon in Iceland and completes an average of three races per month. “With running marathons, hiking, and biking, you get to see more of a country that way,” adds Alpha who currently runs with the DeKalb Striders Running Club and travels with the Metro Atlanta Cycling Club. Both clubs are located in her home base of Atlanta, Georgia.

“I have always been curious about the world we live in. I think travel is one of our most wonderful freedoms, and sports keep our minds and bodies youthful. After my husband passed away unexpectedly, I began to get more involved in fitness activities. I trained alone for my first marathon in New York City at age 48,” adds Alpha. “For several years after that, I ran mostly marathons and half marathons. Later I decided to do triathlons. I was honored to place at the top of my age group in these races.” 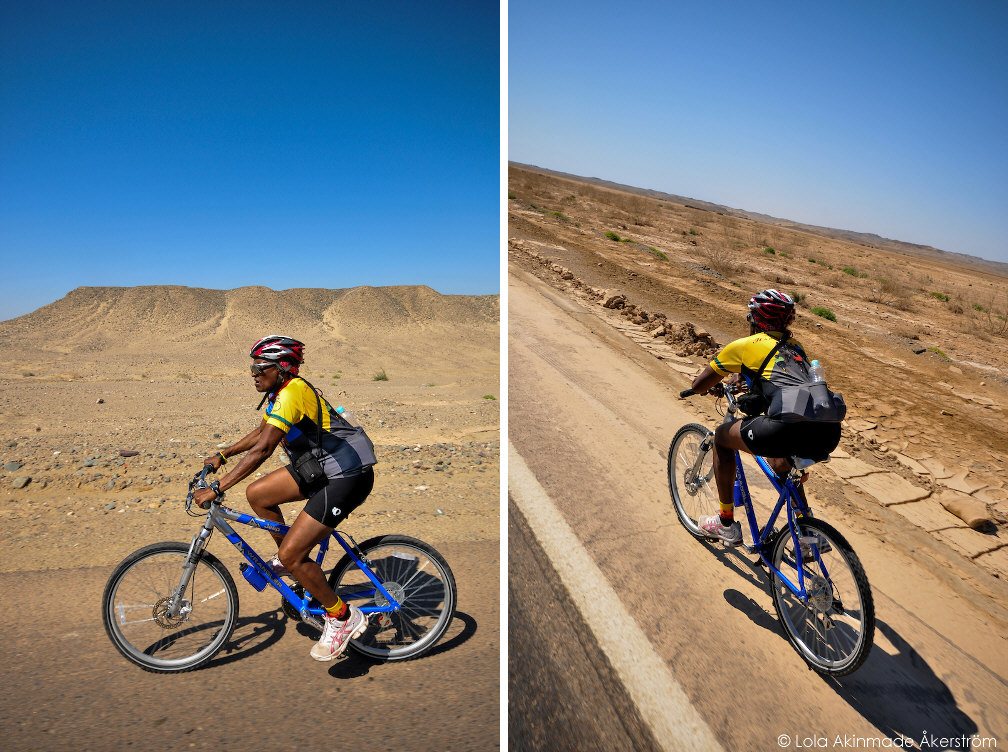 I wanted to know Alpha’s secret. How could one sustain such endurance well into their 70s while outpacing others decades younger? But alas, there wasn’t one.
“There really is no secret,” shares Alpha. “You have to truly love biking, swimming, running or whatever it is you’re doing. Either you like exercising or you don’t. If I didn’t like it, I most definitely wouldn’t be doing it.”

In other words: Passion.

Considering she went skydiving for her 65th birthday, I had to take Alpha at her word. An avid cyclist, Alpha has been able to combine enviable travel experiences with her love of fitness having cycled and hiked in many countries including Mexico, Iceland, Morocco, Bulgaria, France, Switzerland, Cuba, New Zealand, Germany, and of course Egypt where we first met.

From cycling parts of the Tour de France route and taking in some fabulous scenery in France to biking and hiking in New Zealand’s stunning South Island and swimming in a volcanic thermal crack after finishing the Akureyri Marathon in Iceland, Alpha’s next adventures include biking and hiking the Grand Canyon as well as a cross country bike ride across the United States.

While one would think being considered a “senior” and an older adventurer would have its challenges while traveling, talk less of adventure sports, Alpha’s age hasn’t been a challenge while on the road other than getting lost and struggling with the local language – two challenges which know no age limits.

“I believe if you travel with a good heart, a smile, and patience, everyone will accept you for who you are,” notes Alpha. “Step outside of your comfort zone and see our world. Enjoy life to the fullest. Remember that age is only a state of mind. The world is waiting to meet you.” 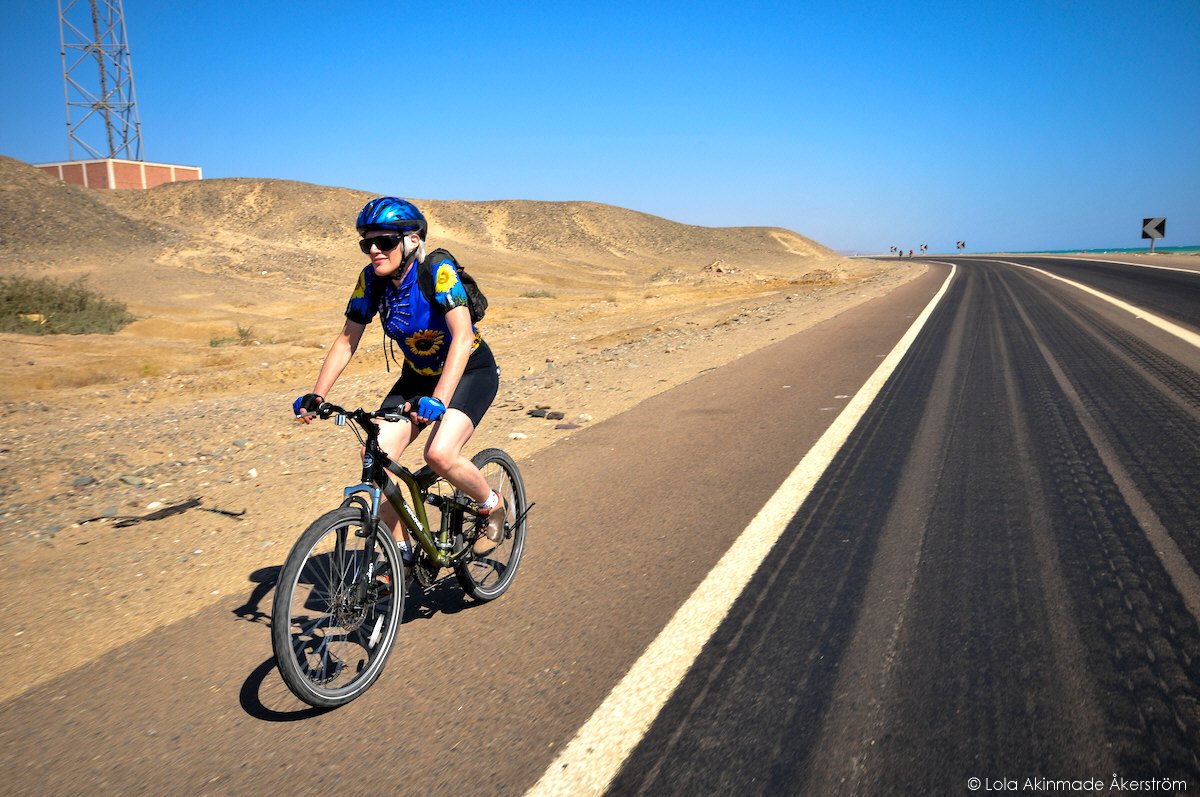 For Ann Lombardi who considers herself 62 years young, “home” is wherever in the world she happens to be for more than a few weeks. And when I caught up with Ann over email, she was tucked away somewhere in the Swiss Alps.

It seems travel genetically courses through Ann’s veins. The excitement of facing something unknown and discovering the world in active, up-close, and personal way, was what drew her to adventure travel. “Since my mother and dad were both athletic, curious people, I think even U.S. family vacations we as children took also had a bit of adventure travel in them,” shares Ann whose curiosity about the world started with her 5th grade geography research paper on the Sámi people of Finnish Lapland.

“Growing up, I think I was really fortunate to have globally-minded parents, who were active members of what then was called the Atlanta Council for International Visitors,” shares Ann. “Every few weeks, my dad would whip out the globe and ask us to find the home country of our next international visitor. My brothers and I also would take turns looking up that country in our trusty Encyclopedia Britannica.

For Ann, this meant sharing her home and evening dinners with fascinating people from across the globe; from a Dutch Parliament member and a Philosophy professor from Ghana to an endurance cyclist from Brazil. 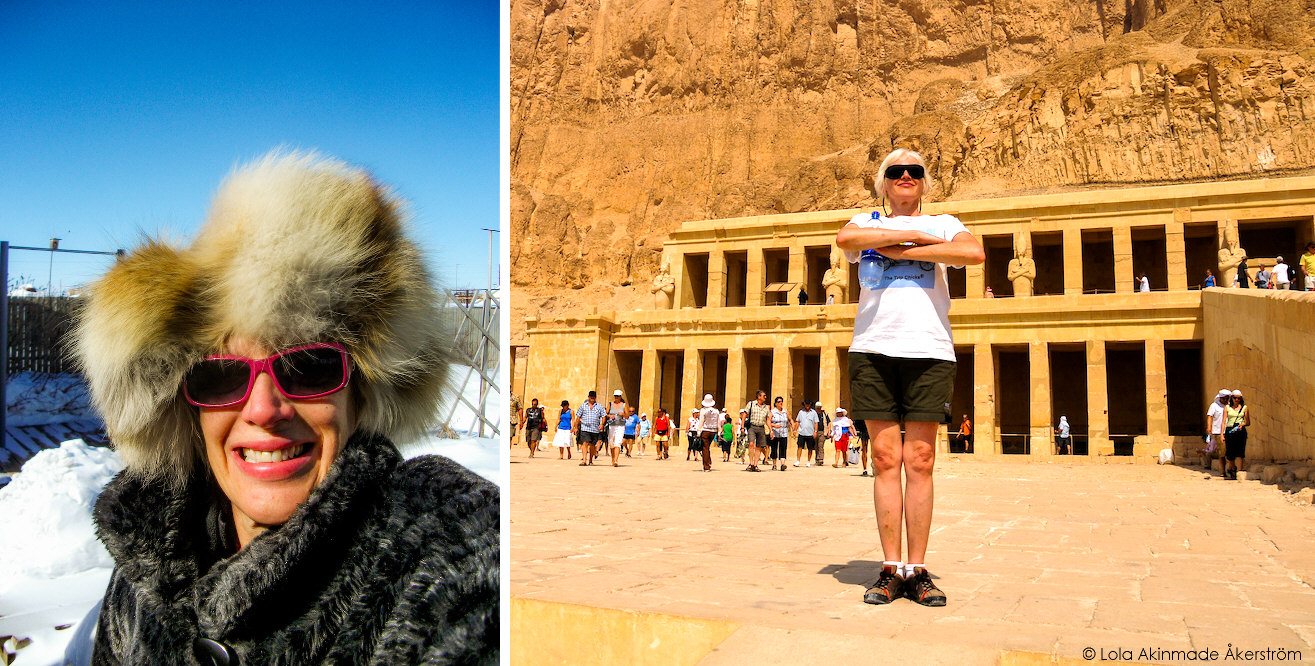 Ann has been to so many countries and says that she would visit each and every single one again in a heartbeat. Her adventures have taken her to Finnish Lapland to experience in-person life with the indigenous Sámi she wrote about in 5th grade. “I recently made a list of the countries I have visited, and was surprised to see that I am now up to 95. Though I realize that quality matters more than quantity, I secretly would like to make 100 within the next two years,” adds Ann.

She’s hiked the Swiss Alps to visit an alpine cheese maker’s hut in Switzerland. She’s competed in the world’s largest women’s cross-country ski race in Norway after a few minutes of one-on-one serendipitous training from a cross-country ski Olympic Gold medalist. She’s braved overnight trains in Bulgaria, Romania, and Turkey, taken part in a traditional shaman ritual in Korea, and also come in dead last in the Berlin Marathon.

For Ann, her innate curiosity which was born in her youth and continually stoked by her worldly parents is what keeps her going well into her 60s, and she has her eyes set on competing in Switzerland’s Cross-Country Ski Marathon, exploring Bhutan and Central Asia, and visiting Antarctica before it melts.“I think people have always found it entertaining to meet active senior adventurers, especially from the U.S.,” says Ann.

“Nothing like breaking the old stereotype. Don’t put off that long-awaited trip any more. Go for it! And if no one wants to go with you, just go yourself. Traveling alone really is the world’s best education.”

While vying for a spot on a North Pole expedition – more like a social media contest where I needed to get as many votes as possible, I stumbled across a name. Barbara Hillary. The first African-American woman in her 70s to have reached both the North and South Poles.

Considering Barbara braved frostbiting subzero temperatures for days to ski to both poles while I was campaigning for a spot on a luxury ice-breaker only to hop off at the North Pole once there, that same shame I felt with Alpha in Egypt resurfaced.

After retiring as a professional nurse, Barbara Hillary became fascinated with Arctic travel. She found new challenges learning snowmobiling and dog sledding in the United States and Canada.

Just a few years later in her late 70s, she would also become the first African-American woman to reach the South Pole, and thus both polar ends of the earth.

Her remarkable discipline and focus were cultivated by her late mother Viola who remains her personal hero to this day, having raised both Barbara and her sister as a single mother. “We never had a sense of mental poverty,” Barbara shares. “There was no ‘woe is me’. You had to be prepared to work and stay focused. If you got knocked down, you got back up. ”

Now in her 80s and a motivational speaker, Barbara is planning her next major expedition which is under lock and key and will be as equally impressive as her polar treks. According to Barbara, old people have no excuse to be bored and no right to be boring. “Wouldn’t it be better to die doing something interesting than to drop dead in an office and the last thing you see is someone you don’t like?”

“People today think the world owes them something,” Barbara goes on to say. “The world doesn’t owe you a damn thing. You get off your ass and you work.”

This story on female explorers was originally published in Women’s Adventure Magazine. Who are some women who inspire you to push yourself while exploring the world?