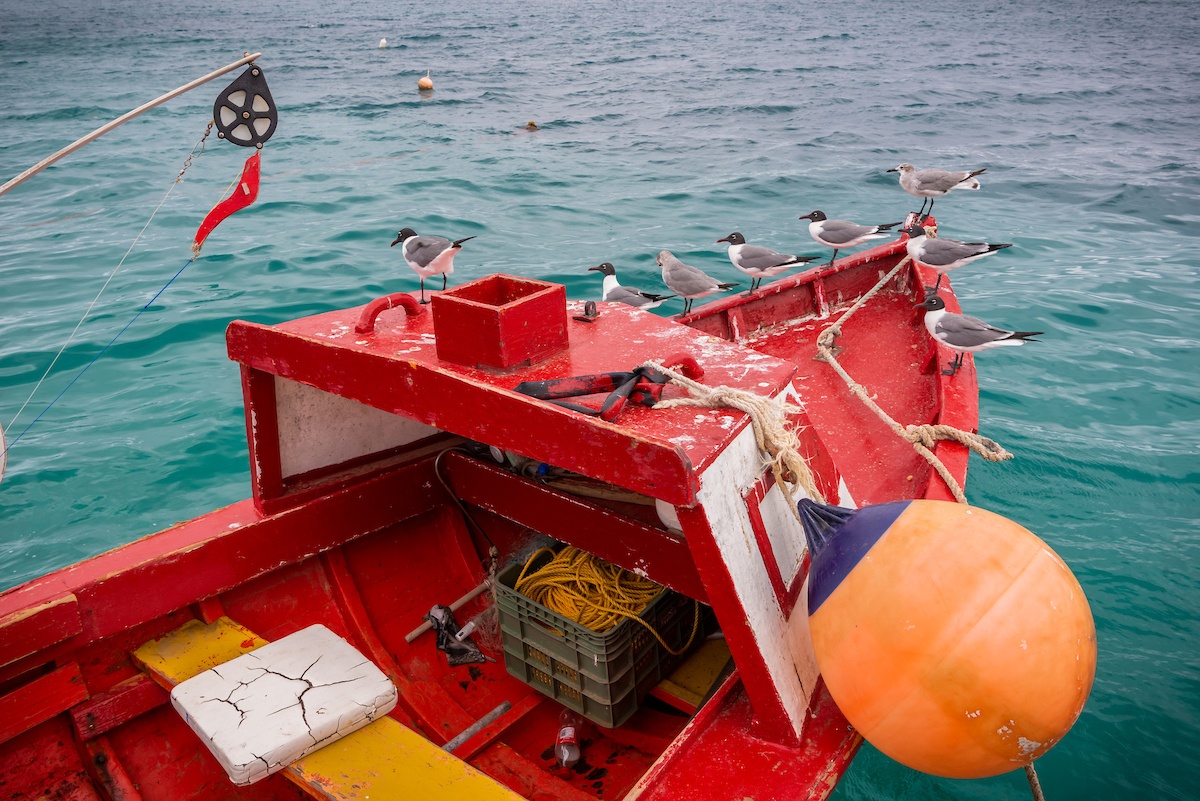 When I visited Aruba, it was with the intention of seeing a different side of the island. I wanted to see its more rugged side beyond just acclaimed powder-soft white sand beaches and glass-clear turquoise waters. I wanted to meet locals and go beyond its fringes and into its interior. With just one week, this meant picking a few points of entry into the culture – from street art and nature to local food joints – instead of trying to cram everything into a short time on the island.

The result was our Aruba visual story below that takes you through the island through our eyes and some offbeat and interesting cultural experiences.

One of the best ways to get to Aruba from Europe is a 10.5 hour long KLM flight via Amsterdam.  Located a few kilometers off the coast of Venezuela, Aruba is part of the Lesser Antilles group of islands which also includes the Virgin Islands, Saint Martin, Guadeloupe, Grenada, Barbados, Trinidad and Tobago, Curacao and Bonaire. From this set, those which are located north of Venezuela are called the Leeward Antilles (Aruba, Bonaire, and Curacao).

Its leeward location south of the hurricane belt means the island is very dry with temperate (almost predictably consistent) weather, desert vegetation, sand dunes, and barely any rainfall. But this also makes the island quite windy. Rest assured, the pilots are quite skilled flying in and out of Aruba. When I flew into its pint-sized capital, Oranjestad, with KLM, it wasn’t until I got on the ground did I realize how windy it was. I never felt it in the air. Our pilot was that good!

An independent country with a modest population of roughly 106,000 and under the Kingdom of the Netherlands,  most Arubans speak four languages fluently – Dutch, English, Spanish, as well as the local language, Papiamento.

The best way to explore the entire island is by renting a car. There’s really only one main stretch of road that runs the length of Aruba and branches off into smaller roads. You can easily ring the entire island around in about 2-2.5 hours max.

Check out my recommendations of what to do in Aruba, some places to explore, where to stay and where to eat in Aruba.

Aruba is a very sparse and barren landscape reminiscent of American Southwest desert regions and its California Lighthouse juts out impressively from amidst the panorama. Built between 1914-1916 in the early 20th century, the French-inspired  90-feet high lighthouse was named after a steamship of the same name “California” which wrecked in nearby waters in 1891.

While making our way down to Oranjestad from the lighthouse, we caught a glimpse of vibrant kites in the sky and took a detour to Malmok Beach where we found a bunch of kite surfers displaying impressive acrobatic skills. The windy island makes it perfect for both windsurfers and kite surfers. Every year in June, the island also hosts the  Hi-Winds Windsurfing Pro-Am Grand Prix World Cup.

One of the most understated, exquisite and reverent places I visited while on the island was this tiny buttercream-colored chapel within its interior. Even the winding drive leading down to the church with crosses driven into the ground and interspersed every few meters is surreal and reverent. This small Catholic chapel dates back to 1750 and has been restored over the years. It is known as the “Pilgrims Church” because of its location. It is also the starting point for many hiking and biking trails.

Through my work as a travel writer and photographer (and subsequent vacations it has afforded me), I’ve been privileged to visit some of the world’s most stunning beaches – from the Seychelles and Mauritius to Fiji, Portugal’s Algarve and beyond. But none of those beaches have felt like pure powdered sugar beneath my feet, and that was exactly what I got at Aruba’s famed Eagle Beach.

In 2018, it was featured by National Geographic as one of the best spots in the Caribbean and regularly ranks as one of the best beaches in the world. It happens to be located right in front of my favorite hotel in Aruba (Amsterdam Manor, read more below) and is also home to nesting sea turtles. You will often see cordoned off sections of the beach where turtle eggs are incubating under sand.

Once a community reserved for Aruba’s wealthiest citizens in the past due to an active refinery and port access, San Nicolas plunged into urban decay for many years until it was reborn in the most vibrant way – as Aruba’s only mural district with some of the best murals and street art I’ve seen during my travels.

Read more about my experience as well as a vibrant photo essay – Spectacular street art in Aruba – San Nicolas.

Sailing and snorkeling with Tranquilo charters

Despite my deep seated fear of the ocean, I love sailing and gliding across choppy waves and waters. While in Aruba, I went sailing with family-owned Tranquilo including a snorkeling stop at the amazing barrier island and beach Mangel Halto – considered the best spot for snorkeling in Aruba. There you can drift around in the Spanish Lagoon or go further out to swim among amazing corals.

Founded by Captain Mike Hagedoorn who had been sailing for over 20 years, the business is now run by his son Captain Anthony who leads its lunch cruise to the south side, including lunch of the family’s Dutch pea soup recipe and sandwiches, and drift snorkeling at a secluded reef island named “Mike’s Reef “.

Other experiences: what to do in Aruba

Here are a few more wonderful cultural experiences you can enjoy in Aruba.

During my time exploring the island, one of our lunch stops was at a local favorite called Local Store. But my two favorite food experiences while in Aruba

With its stunning pier front location, Zeerovers – which means “pirate” in Dutch – is a very relaxed, eat-with-your-hands seafood shack which serves the freshest seafood and prawns flash-fried before your eyes. You can literally watch fisherman after fisherman sail up to its wharf to deliver their bounty.

How it works at Zeerovers… You pick your fillets of fresh fish and prawns by the pound (or kilo) and pay up front. Then your pick is handed off to be fried and then served with the juiciest fried plantains and crispiest French fries.

Passions on the Beach

Watching the sunset across a shimmering Caribbean Sea from the shores of Eagle Beach (described above) while tucking into steaks and seafood beneath the soft lights of tiki torches makes Passions on the Beach  one of my favorite culinary experiences on the island. Throw in some live mood music by a local troubadour and I’m not sure it gets more romantic than that.

Plus, guess what? Passions on the Beach is also one of the dining arms of my favorite lodging on Aruba – Amsterdam Manor (see below).

If I could choose one single place where I would love to hide away for a week (or two even) for a writing retreat with the waves of the Caribbean crashing in the background, steps away from one of the world’s best beaches, and that home-away-from-home feeling as opposed to the big resort feeling, Amsterdam Manor Beach Resort was it for me.

A mere five-minute drive from Oranjestad as well as easy access to the “High Rise” area with numerous dining options as well, Amsterdam Manor ticks off all the amenity boxes with its rooms coming with kitchenettes or fully-equipped kitchens and separate sitting areas. From the manager’s special happy-hour drinks to Eagle Beach at its feet, I absolutely loved this place and plan on coming back in the near future.

While I personally try to avoid large-scale all inclusive resorts, on the rare occasions I do stay at them, it’s usually with my entire family in-tow for convenience reasons. And even that, I’m extremely picky about which properties and brands I chose to stay on a full-board basis. Mostly because their environmental impact, community outreach, local support, and sustainability practices are extremely important to me. I essentially see them as perpetually docked cruise ships.

What I really appreciated about Divi Aruba All Inclusive (besides its stunning beachfront access with exquisite dinner views) was its sustainability practices. The resort has banned single use items. There are no plastic straws or paper napkins, and guests are provided with reusable water bottles. It actively composts waste, sends food leftovers to pig farms, monitors water usage, and places all lighting are on timers. There are solar panels installed on its roofs and its VRF systems use the lowest amount of energy. Its employees participate in activities such as the “Aruba Beach Cleanup” to keep its beautiful beaches clean as well as protects nesting sea turtles.

View more photos from Aruba in my image bank

For more photos of what to do in Aruba, check out my image bank below.

This article about what to do in Aruba is part of our #NordicTBinAruba collaboration between Aruba Tourism Authority, KLM, and NordicTB. All opinions and views expressed are solely mine.