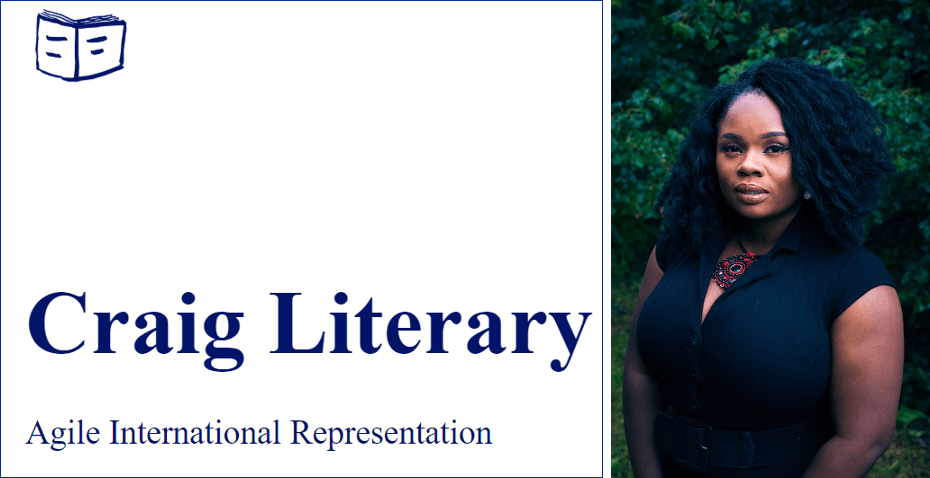 I am beyond ecstatic to announce that I now have a literary agent.

Not just any literary agent, but the amazing Jessica Craig behind the international boutique agency, Craig Literary.

To give you some humbling perspective, Jessica also represents the prolific Chigozie Obioma whose book The Fishermen was a Man Booker Award Finalist among an endless list of other awards and has been translated into 26 language editions.

And this is just one of a handful of amazing authors and artists Craig Literary represents as well as secures foreign rights for.

I met Jessica briefly in Stockholm through our mutual friend Yomi while she was recently on tour with Chigozie here in Sweden (watch his interview on Sweden’s premier book show, BABEL) and in those mere thirty minutes, I instantly knew that even if she didn’t like my books or new fiction manuscript, we would remain friends because we had great energy. One that foreshadowed hours upon hours of just talking about anything and everything if we had time.

She really liked my novel AFRÖSWẸDẸ (and its title too!), responding with a resounding YES! that publishers will be interested in its story line.

“I think it’s a remarkably polished first draft, and I really like your voice and writing style! And you bring a refreshing and intelligent new perspective to women’s fiction.”

We’re now finalizing and making tweaks to the manuscript based on feedback from my 12 wonderful beta readers, readying it for submission within the next four to six weeks. Special thanks goes to Leigh Shulman who worked with me on editing that first draft so that compliment “a remarkably polished first draft” I’m sharing with her!

I have experience both self-publishing DUE NORTH through my company Geotraveler Media as well as working directly with one of the top five publishers Hachette for LAGOM Book (18 language editions).

But for my current book, which is upmarket women’s fiction, I knew I wanted a literary agent.

Choosing a literary agent is a major task for any author. And I also know it can take years for an author to find a literary agent too. I recently received requests from seven other agents for samples/full manuscript but I knew right away that Craig Literary (if interested) was the one I would go with.

Needless to say, I feel humbled, blessed, grateful, excited and all sorts of good emotions right now, that this book of love is inching closer along its journey towards publication. You can follow along at #AfroswedeBook.

Jessica Craig’s career in international publishing spans twenty years: from New York (1994-2005) to the United Kingdom (2005-2014) and Barcelona (2014- present). At United Agents, London, where she worked for seven years, she was a founding agent and the first foreign rights director.

Craig won an international reputation for securing multiple translations for the agency’s wide range of fiction and non-fiction authors, such as Eleanor Catton, Erin Kelly, Jane Casey, and Ben Goldacre in the decisive early stages of their writing careers. She also expanded the international reach of bestselling British writers such as Alan Bennett, Alain de Botton, Danny Wallace and Christopher Brookmyre.

In 2014 Craig joined the Pontas Agency in Barcelona to grow as a primary agent representing international novelists as well as handling UK/US deals for Pontas authors including Milena Busquets and Eka Kurniawan.

Among Craig’s first clients are Nigerian Chigozie Obioma whose debut The Fishermen was a 2015 Man Booker Finalist and has translation rights sold in twenty-six languages; and Chinese-American Jack Cheng whose novel See You In the Cosmos, Carl Sagan will be a lead middle-grade debut in 2017 for Puffin in the UK and Dial Books for Young Readers in the USA, and translation rights are sold in twenty languages.