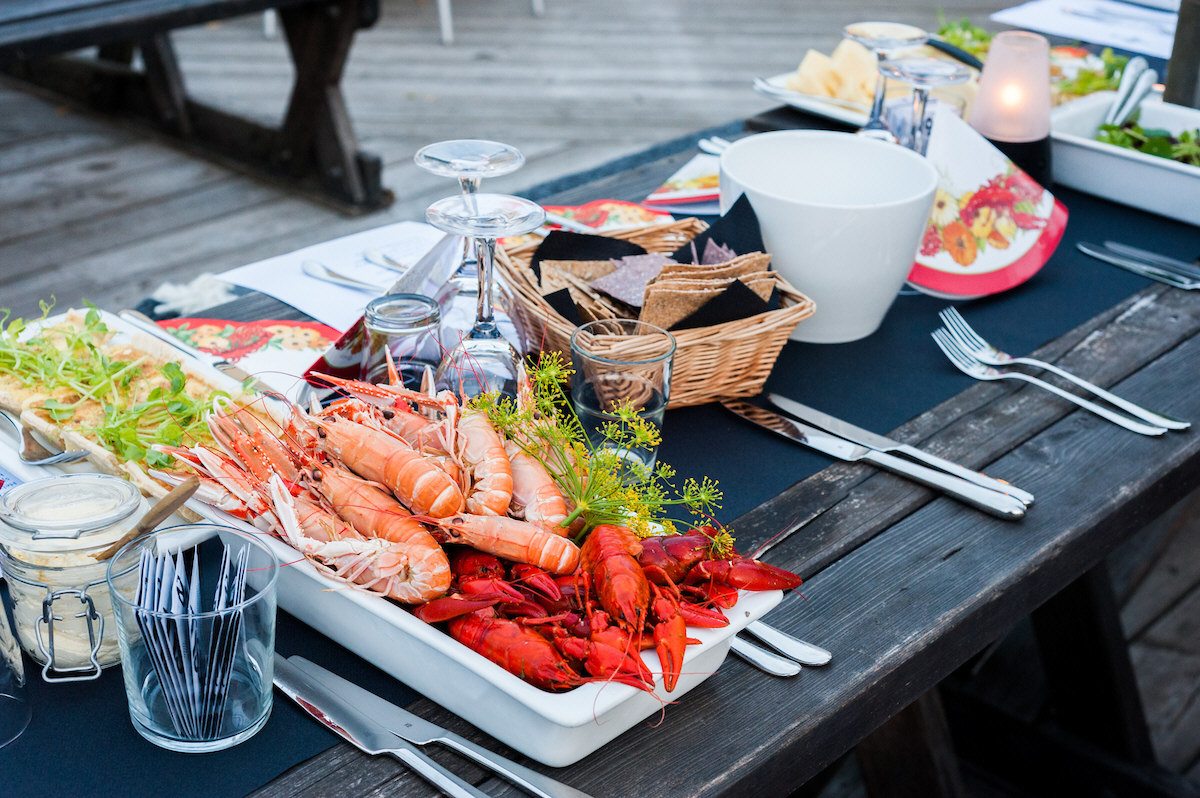 I remember my first time.

Our friend Tomas had invited my husband and I to his lush green backyard where old wooden tables were strewn together and covered with white linen well-worn from use. Cozy wool blankets, some frayed with age, lined those wooden benches. Non-matching glass plates from various porcelain collections were laid out and topped with white paper napkins.

Next to our plates were photocopied sheets of old Swedish drinking songs. A song was collectively belted out to start us off. Old and new friends alike dug into bowls of steamed crayfish, hungrily cracking those red shells. We pulled at tiny orange-and-white striped pieces of flesh while we sucked salty juices from the shells. A makeshift tarp made from boat sails was tied to trees and propped up with wooden sticks to cover us.

I was enamored by that simple unpretentious ritual of a traditional crayfish party I experienced that warm late summer evening.

At the tail end of summer between the months of August and September, Swedish society deems it perfectly acceptable for adults to don matching paper hats and paper bibs with colorful crayfish motifs, down alcoholic schnapps and aquavit while singing indecipherable folk songs, and nosily suck out the brine filled heads of langoustines and freshwater crayfish.

This means crayfish season is officially upon us.

And the best way to truly enjoy this quintessentially Swedish experience is by being invited into the cozy home of a local for a kräftskiva – crayfish party. Balconies are adorned with paper décor in the likeness of crayfish and garden parties are thrown all over Sweden.

Once accessible to only upper class citizens and aristocracy in the 16th century, imports of crayfish from China and Turkey have significantly driven down its price over centuries, making them more accessible to and affordable for the masses.

But authentic Swedish crayfish harvested off the shores of Sweden’s west coast remains the top choice even though it is the most expensive to source.

By the mid-1800s to 1900s, crayfish parties spread across the classes as a way of celebrating the end of summer before heading towards the cold harsh darkness of winter via autumn.

While cracking into shells, I also learned that shellfish caught off the waters of Sweden’s rocky west coast archipelagoes are in a world-class league of their own.

So I headed out west at the first opportunity.

Even Stockholmers agree, West Sweden has the very best seafood in the entire region. Its proximity to the cold clean waters of the North Atlantic means shellfish grow and mature better, retaining richer and more flavorful flesh.

I was going right to the source, but this time around felt extra special because we were going to be catching our own crayfish and langoustines along the Bohuslän Coast, picking up organic crisp bread and artisan cheeses from local producers along the way, and were going to learn how to cook, serve, and dine on them the proper way at our very own kraftskiva hosted at former 19th century mill-turned-hotel, Norrqvarn in Lyrestad, West Sweden.

But first, we had to go fishing for langoustines.

That quest took us to postcard-perfect fishing village Smögen. The waters around the village produces the largest langoustines in the region. We met up with local fisherman Martin Olofsson of Smögens Fiske & skärgårdsturer. We hopped on his fishing trawler, battled choppy waves, and bobbed along in stomach-churning fashion as we pulled up fish traps from the depths and emptied the langoustine bounty they held before casting them back into the ocean for several hours. Martin steamed a few right on board for us and pulling them apart to reach the juicy flesh was just the anticipatory precursor to our party the next day.

The next morning with a cooler full of fresh langoustines, we headed towards Lyrestad where the hotel Norrqvarn was located. But we were still missing a few essential items. Crisp bread, hard mature cheese aged to crystallized crumbly perfection, and some schnapps to toast drinking songs.

First was Qvänum Mat & Malt, an organic microbrewery and distillery owned and operated by Claes and Annica Wernerson in a farm located in a prehistoric village dating back to the 7th century. There they craft their own speciality porters, lagers, and schnapps. Then it was picking up mature cheeses from fifth generation family-run Sivan Osthandel (Sivan’s Cheese) whose artisan cheeses are known around fine dining circles. Their oldest Svecia cheese is made from only Swedish cow milk and aged for up to 40 months.

Rounding out the trio was locally-produced Swedish crisp bread (called knäckebröd) from family-run organic bakery Knäck & Bräck which keeps this 1,000+ year old Nordic craft of making crisp bread alive. Ingredients include cranberry, sesame seeds, juniper berries, tomatoes, and blueberries, including seasonal flavours, and their artisan crisps have made their way to Harrods in London.

With our sides in tow, we forged on towards Norrqvarn where we were going to go fishing for freshwater river crayfish within the Göta Canal. One of the largest construction projects in Sweden’s history, the Göta Canal was dug and built in the early 19th century to connect both coasts of Sweden (via Gothenburg and Stockholm) for transportation purposes. Instead of having to sail around Sweden’s southern coast to get to Stockholm and its east coast (and vice versa for Gothenburg), the 120-mile long canal with its 58 locks drastically shortens the journey.

And its waters are packed with crayfish.

We met up with local historian and fisherman Kjell Karlsson with a wheelbarrow full of metal traps which we set up along various parts of the canal. Several hours later and we were able to pull out a few dark indigo-colored crayfish that looked nothing like the bright red versions we’ve seen served.

We handed over our coolers of fresh Smögen langoustines and buckets of river crayfish from the canal to Emelie Nielsen, Norrqvarn’s resident chef who showed us the proper way to cook these small crustaceans in hot water infused with freshly picked sprigs of organic crown dill.

Within seconds, the indigo-gray shells of freshwater crayfish we’d caught ourselves started turning a rich reddish-orange color as Chef Emelie poured piping hot water over them.

She was also going to provide the final homemade accompaniment – the infamous creamy Västerbottensost cheese pie with its uniquely sharp taste.

We were out on the wooden patio deck of Norrqvarn along the banks of the Göta Canal where the table was set in that familiar pattern I now know too well. Paper plates with crayfish motifs replaced my friend Tomas’ mix-and-match porcelain sets, colorful sun face and paper lanterns were strewn up as the sun began to dip for the evening. The company was different but the festive mood was the very same.

And all along the way, I knew it was going to require a whole lot of time to plan including waiting for those little crustaceans to bite while fishing and the patience to see me through. With all that effort culminating into barely-there bite-sized pieces of flesh we had to battle out of hard shells.

But it was totally worth it.

Because when we don our comical yet essential paper bibs and hats in unison, strangers become friends and even the most reserved of Swedes is metaphorically pried out of their own shells.

This travel narrative from Sweden was awarded the bronze award in the “Travel and Food” category of the 11th Annual Solas Awards for Travel Writing by Travelers Tales. A modified version of this piece was published in Spoonful Magazine.