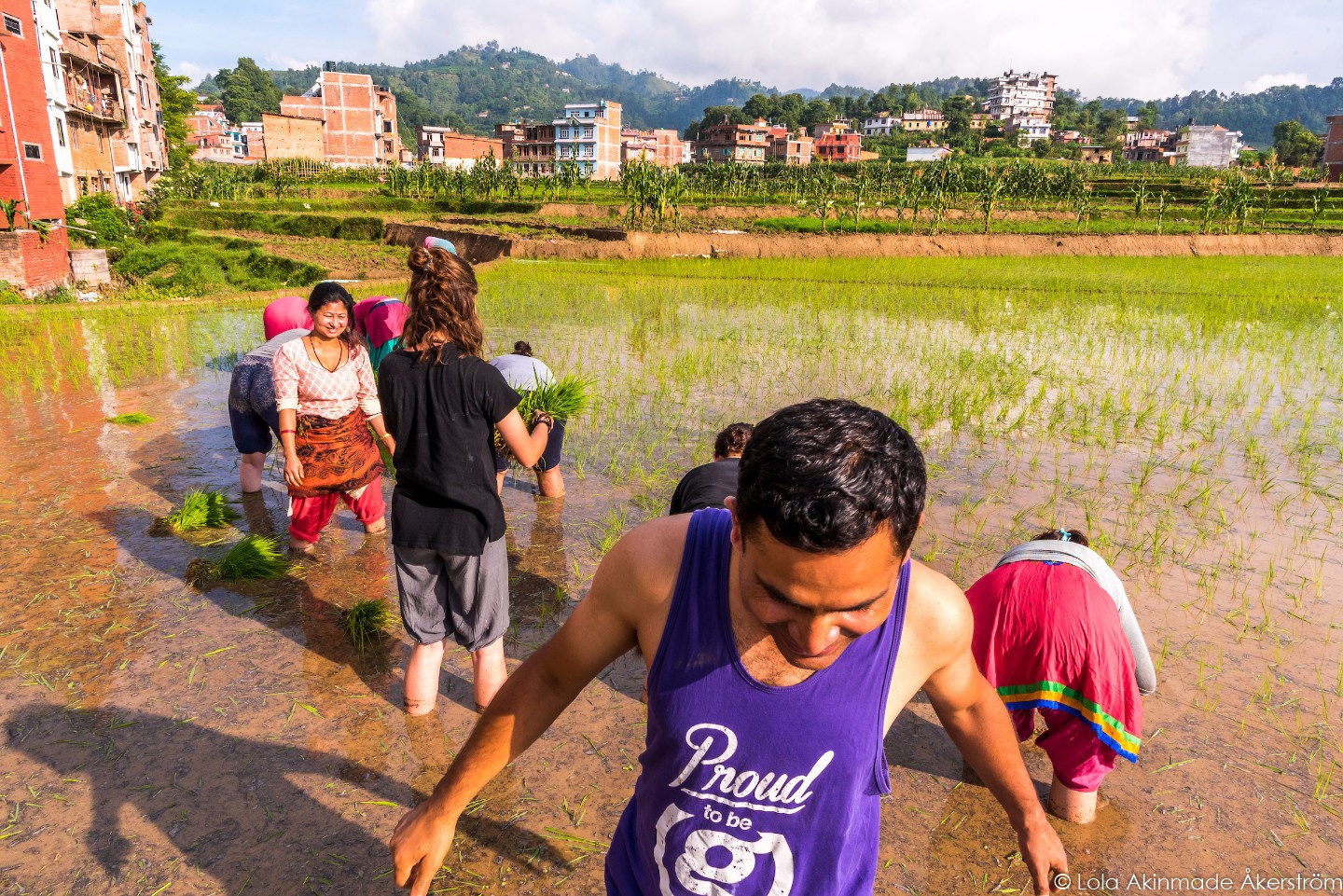 It’s safe to say I didn’t anticipate how 2017 would turn out as a freelancer but I just rolled with it and it turned out to be my best year to date (including surpassing my past life as a system architect).

When I closed out my work review of 2016, I wrote that I wanted 2017 to continue to be the year of the three “P”s – Partnerships, Projects, and Passive Income.

The bulk of my income came from anchor clients and other consulting gigs which used my expertise. Many partnerships came through the NordicTB Collective which I co-run, while projects and passive income included books, gallery sales, and stock photography.

And looking at how my income distribution chart below panned out, this was exactly what happened in 2017 and I’m super grateful for that focus. I mentioned I wanted to delegate more as a way of self-care and I did! My (wonderful) virtual team is now five (5) people strong including three interns working on various tasks.

While I continued transitioning from pitching to projects in 2017, I still made a lot of print and digital contributions including work from repeat clients such as National Geographic Traveller, Lonely Planet, AFAR, BBC, Turkish Airlines, Singapore Airlines, Fodor’s, Cadillac Magazine, Forbes, and Adventure Magazine (which I adore!).

I also had an 11-page photo spread covering Greenland in National Geographic Traveller which was exciting. I tell you – as a photographer, seeing your work spread across multiple pages in a publication you respect never gets old.

I also did six (6) Instagram takeovers for various travel brands and publications. 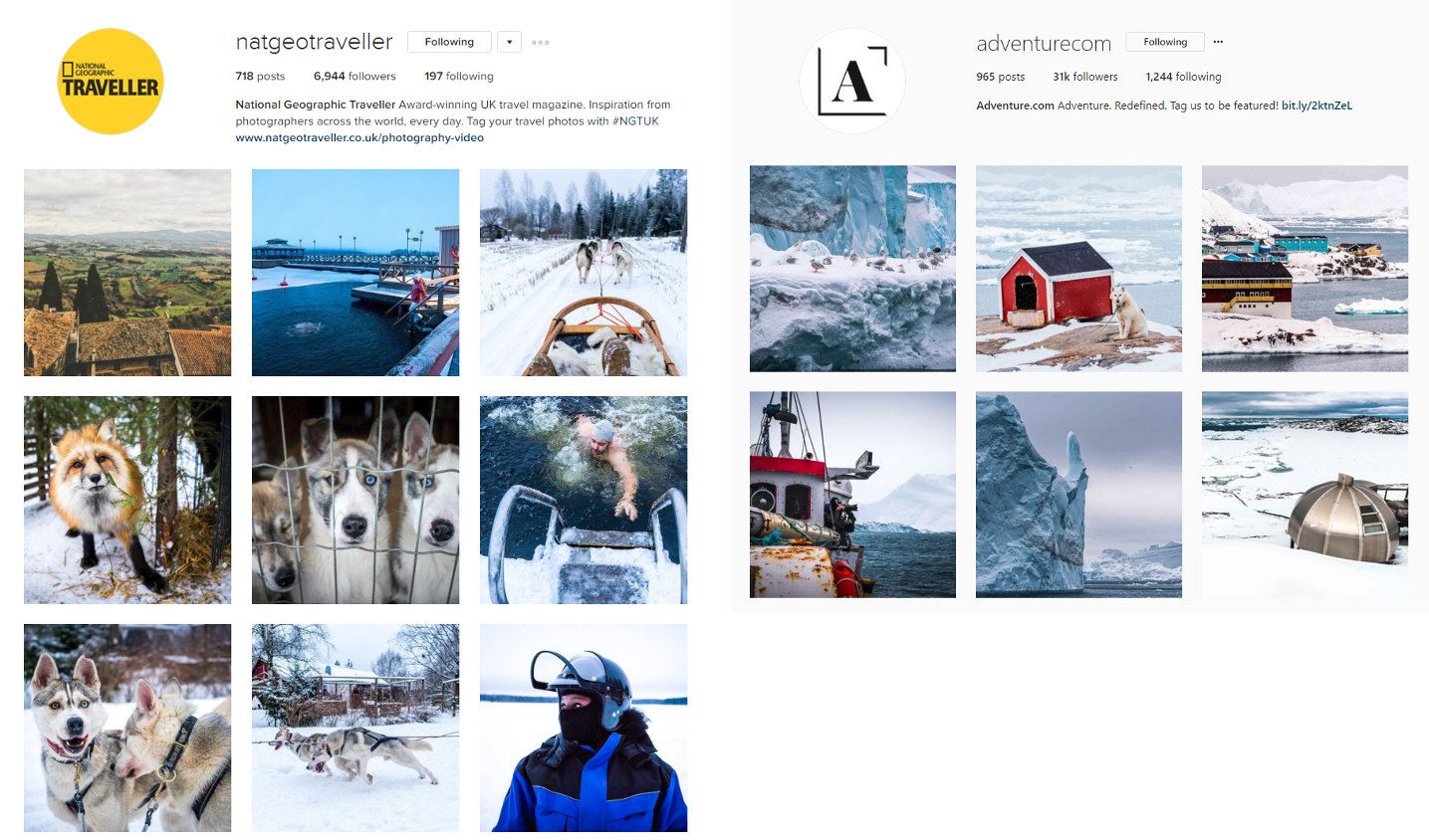 So here’s how 2017 panned out. Each query status has been categorized using the following legend:

New for 2017 – I also rejected three assignments because the rate was too low, but I still filed those under “Interested” because I was the one doing the rejecting, not the editor. 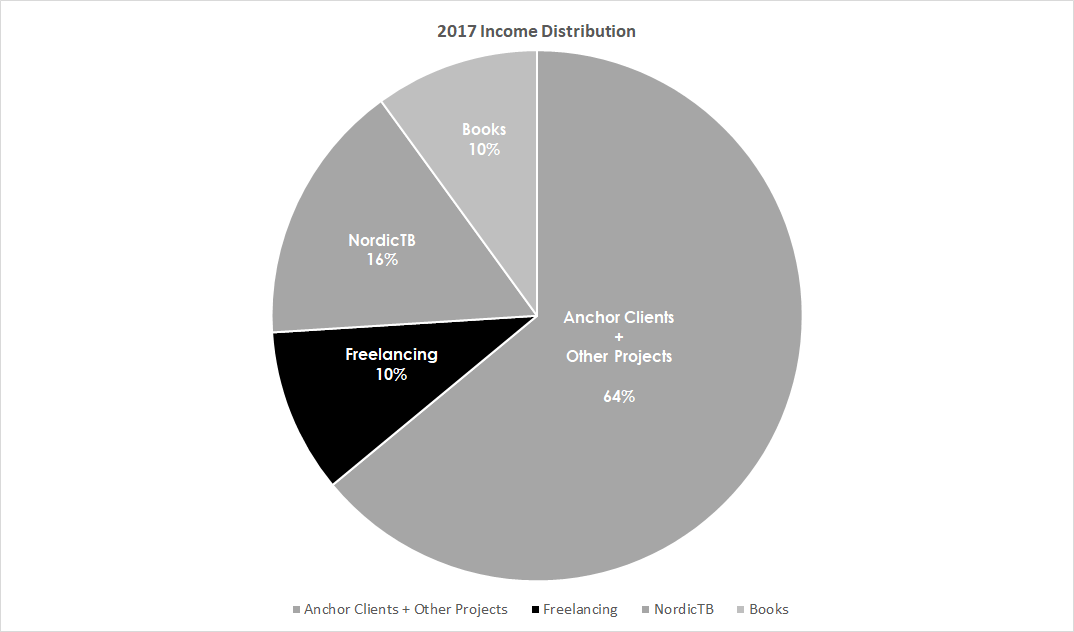 Where did all my freelancing go???

In 2016, that slice of the pie was 35% but in 2017, that dropped significantly to only 10% of my income. This shift saw me better allocating my time as rates continued to decline in 2017 for print and digital articles. This distribution shows that I am successfully diversifying my income stream (knocks on wood!) and not putting all my eggs into a single basket. Most of the 10% book income came from foreign edition deals which had their own advances and royalty structures.

But the focus of this post is mainly on that 10% slice of freelancing for various publications. 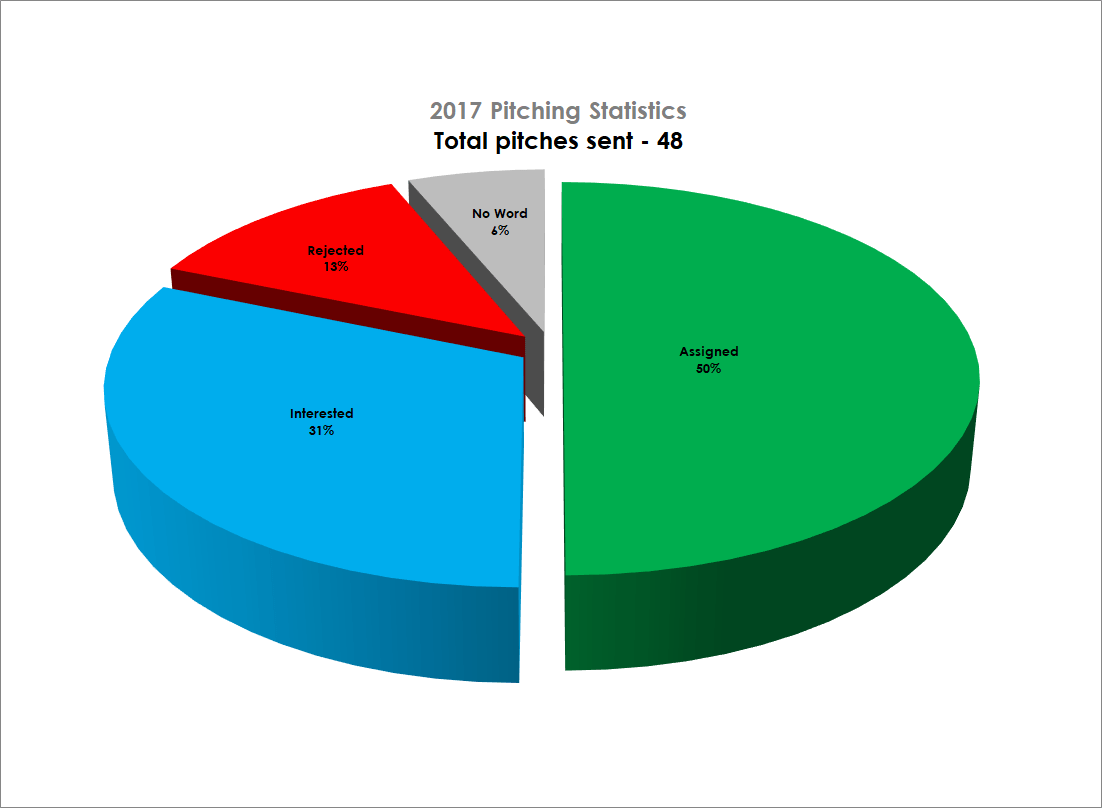 I sent out a total of 48 pitches in 2017. This is unusually low for me as a freelancer, but you can see where most of my energies were spent in 2017.

Of these pitches, 24 were assigned, 15 are currently being reviewed by editors/in various stages of limbo, 6 were rejected, and 3 (only 3, yay!!) are still floating around in the “No Word” zone and have yet to be acknowledged.

In 2016, there were 87 pitches (either sent or assigned without pitching) which was almost double what I sent out last year’s total but I’m comparing the percentages in the chart below to visually see how both years stacked up against each other. 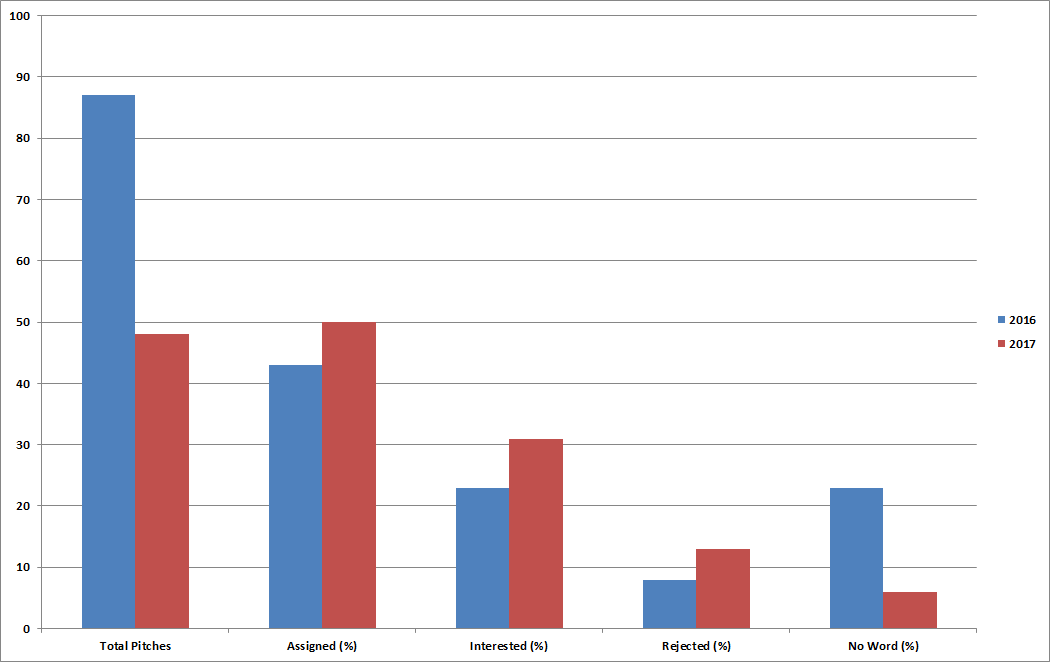 Even though there were half the number of pitches in 2017:

THE GOOD – My “No Word” pile dropped from 23% to 6%! As in, only 3 pitches were floating in that nebulous zone. This is what I’ve been battling for 10 years as a freelancer. Most of those moved into the “Interested” category and are still sitting in various stages of limbo at the publications. But still…

THE NOT SO GOOD – While technically, only 6 rejections is very good, that did shoot my percentage up to 13%. Since I’ve been publicly publishing these charts, sometimes I feel like there are a few editors that want to disrupt and burst the bubble just because they feel they can. They reject a solid idea with no reason (“I’ll pass”), then turn around and publish a (very) similar one.

So, I am now keeping a closer eye on those editors that are now rejecting ideas with no real explanations even though I’ve contributed and worked with them in the past.

Because… you know… karma.

In addition to statuses, I also reviewed the notes I kept alongside the queries to see why they had the status they did.

Of the 48 pitches, 31 were from editors putting out a call for pitches or reaching out to me directly, while the other 17 were straight up regular pitches. This is the sweet position I’ve worked hard to reach and would love to continue to be in. I have spent years building up regional and niche expertise covering the Nordics and the Baltics so this has been a great source of work.

Special shout-outs to all fellow writers and photographers who recommended me to their editors or shared potential leads with me. I always do this for my colleagues as well.

While a 81% positive response (50% assigned + 31% interested) is very good, if I am going to be spending any time freelancing, I need to be making sure that assignment rate is 75% or more, and pieces are not sitting in limbo.

This means proactively following up on my part to help prod a piece along towards publication.

This also means I will continue to nurture relationships with editors who value my work with mutual respect and understanding.

That quote above is from my prolific friend and writer extraordinaire Julie Schwietert  Collazo.

A tale of two brands

So, I got an email each from two similar brands that provide the same service.

One wants me to contribute for exposure.

The other is sending me around the world, covering all my travel expenses, and paying me a solid day rate for each day I spend on location.

Guess which relationship I’ll be nurturing.

I’m a pretty easy-going and down-to-earth person who makes myself available (maybe too much) to help others. 2018 is not going to be drastically different as I’m always ready to help, but my time will not be wasted.

I will continue growing and expanding NordicTB alongside my co-founders Janicke (Norway) and Inna-Pirjetta (Finland) because I love the work we do in terms of taking travel blogging to the next level in the Nordics and making sure influencers and bloggers are respected for the quality of their work.

Even though my income from freelancing was only 10% of last year’s pie, who knows what 2018 will bring. I already have some cool partnerships and assignments in the works including one that will take me to California, China, and Switzerland for starters. I will also actively promote my lovely book DUE NORTH which I pushed to the wayside when LAGOM was released.

I will continue to tighten my virtual team and continue to delegate as a way of self-care, and focus a lot more on brand building of my own platform. Refocusing all that time I spend externally to focus more on building internally.

I’m really looking forward to what 2018 will bring work-wise and it’s off to an exciting start in terms of collaborations beginning next week!

Editors, if you’re reading this…. In addition to tradition, lifestyle, and cultural food stories from around the world, my regional expertise covers the Nordics and Baltics (both writing and photography) on short notice in case you have them in your 2018 editorial pipelines!

For fellow freelancers out there, how did 2017 go for you? Did you hit some of your professional and personal goals?